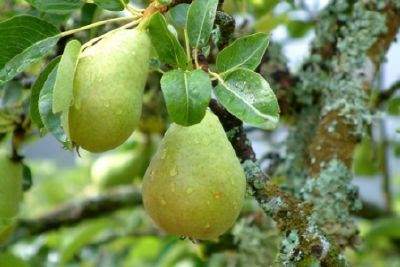 Some people leave a mark on history; some even leave their name. France has a pear with an English-sounding name: Poires Williams. I always wondered why. So for this recipe, I did some research.
This pear, which Americans know as Bartlett, actually comes from Calabria and one was offered by St. Francis of Paola to French king Louis XI on the king’s death bed. This deed of kindness led to its first name: the bon chrétien (good Christian) pear. When it reached England in the mid-17th century, the name of a nursery gardener was tacked on and it became Williams’ Bon Chrétien pear, but that name was too long so the "good Christian" was left out. Then in 1799 it was brought to the United States by Enoch Bartlett, which is why Americans know it as the Bartlett pear. 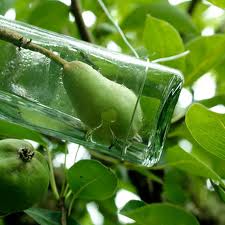 My first brush with Poire Williams was as a strong pear-tasting brandy - a pear with a kick. Then one day I saw this cognac in a bottle, with a whole pear inside. It looked like a magic trick. Years later I learned that the growers tie the bottles over the pear blossom on the tree and the pear grows inside it... although that still seems like magic to me, because I can’t imagine how the pear could prosper inside the glass or why the glass doesn’t break, swinging in the wind.﻿
Williams (or Bartletts), both "Good Christians", are the most commonly grown pear outside of Asia. They’re popular for cooking and canning because they keep their shape well. They start appearing at the green grocers in late summer, so this is a timely recipe to make. And the spices are a nice touch when September evenings get chilly.
Although the recipe uses wine, the alcohol will burn off, so there’s no danger of getting tipsy eating it. But you’ll still want to choose a good wine. Remember what W.C. Fields said: "I cook with wine. Sometimes I even add it to the food." 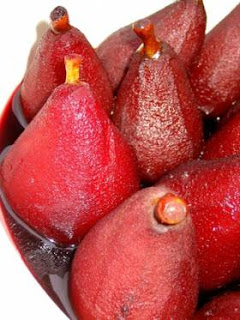 
- To prepare the syrup for poaching the pears, bring the wine to a boil with the spices, zest, honey, vanilla and sugar.

- When the wine boils, lower the heat. Delicately slip the peeled pears into the wine. Cover and simmer until they feel tender when stuck with a knife (20-30 min).

- Remove the pears and set them aside.

- Reduce the syrup until it thickens and starts to coat a wooden spoon. Filter it and pour it over the pears.