On the Road: Northern Circuit - Part One

The road trip begins with a train ride from Paris to Rennes, in Brittany, the west end of France. My two friends and I were supposed to pick up a rental car at the "downtown" office, which turns out to be in an industrial suburb, so we take a taxi there. Given that it’s on the east side of town, closest to Mont Saint Michel - our destination - we decide not to backtrack to sightsee in the city and instead head directly for MSM.
﻿
A bit of background: Back in my French university days, I bought my books for the Sorbonne at Gibert Jeunes, and made friends with one of the college students working part-time in the textbook department. Eventually he invited me to his house to meet his wife and friends, including one Christian. Years later Christian married a certain Nadia, who had a girlfriend Annick. Years after that (i.e. now) I return yet again to the country B&B of Annick and her now-retired husband Jean, in a farm house near MSM. And that’s how one thing leads to another. 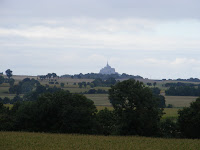 This visit I come with friends. Jean (and the cat, and Zazie, the cocker spaniel) are there to welcome us. Jean upgrades us from the small rooms initially reserved to bigger quarters - two full floors, all to ourselves! - and with a perfect view of the Mont just a few kilometers away. 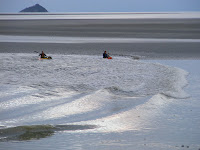 Later he escorts us to a hard-to-find place on the river to watch the mascaret, the equinox high tide that comes in at the speed of a galloping horse and creates a small wave crest... which is why we’ve come this particular day in September. Several times I’ve stood at the top of the Abbey and watched the high tide flow in, gradually surrounding the entire island. But I’ve never seen it from along the riverside, which is far more impressive. There’s just no way to explain the rush of the sea retaking what rightfully belongs to its water world. The water races towards us and then by us, four kayakers riding its crest. The noise level is surprising, like a flooding river, which is precisely what it is, really. And this has been going on since the beginning of time. It makes you feel very small and superfluous. 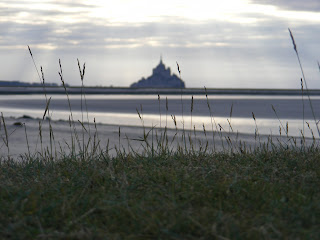 Then Jean drives us to the Mont and shows us a way to circumvent the DisneyWorld-worthy 5,000-car parking lot that has been built to make MSM a hands-free zone. No more driving all the way out to the very foot of the island. Now you either walk the almost three kilometers or you take a push-me/pull-me shuttle bus that has replaced the space-age monorail project, deemed too expensive. I can’t tell you where this known-only-to-the-natives place is because I was sworn to secrecy. But the next day, when I manage to follow the route he traced for us in the dark of night, we break loose from the sheeple and arrive as free agents. 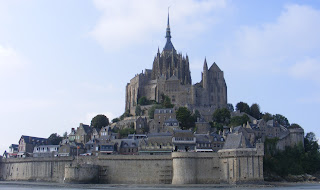 The tide is one of the highest of the year, as it is every April and September, and the main gate is under water so we must squeeze one at a time through a small side door in the ramparts. This is the right way to enter a world that was closed in on itself throughout the Hundred Years War... and many other moments of its history. (We will leave through the main gate because the tide will have gone back out, leaving the wooden walkway dry.) 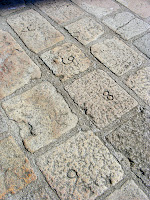 It’s early in the day, so we’re ahead of the crowd. After 400+ steps, and a bit of rain, we reach the Abbey, and the amazements begin, one after the other... starting with how this ever was built to begin with, and how it has endured. The simplicity, and yet the amazing beauty, of every detail is striking, from the dimensions and sheer size right down to the unstained but patterned glass of the windows. On the terrace, there are marks of day laborers who hammered an initial or a number into each stone they set, so that the straw boss knew how much to pay them for their day’s work. 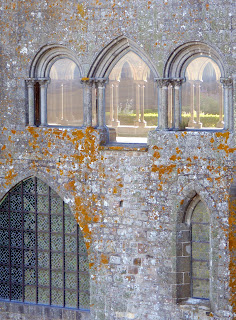 From there, suspended close to the sky, where a lightning bolt is only a heartbeat away, you descend gradually back through time, from La Merveille to the refectory below, and then to Our Lady Underground, where immense columns support - literally - the thinner columns above. On through the room where a huge hamster cage is a reminder of when the Abbey - abandoned by the monks after the French Revolution - was used as a prison and prisoners walked endlessly in this wheel to pull up sledges lashed with food and all the other goods the jailers and their wards required. Then on through the crypt where the dead lay in wake, and on to the scriptorium... and then out into the mistyness of the village that grew up around the Abbey.

We arrive back at the B&B to pick up our suitcases. Instead of which, we are regaled by Jean and Annick with a light lunch of garden tomatoes, quail eggs, cheeses and fruit fresh from their own trees. Then off to Bayeux. 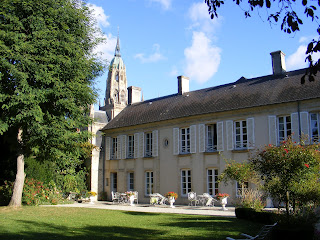 The road is modern, and we arrive in a little over an hour. Our hotel is one I’ve stayed at several times, after stumbling on it during a day trip. We’re welcomed like old friends and ushered to rooms that are picture perfect, right down to freshly cut flowers... in the bathroom! I accompany my friends to the Bayeux Tapestry, then excuse myself - I’ve seen it too many times - but still warning them where The Naughty Bits are... that’s so much fun to find in a historic monument. 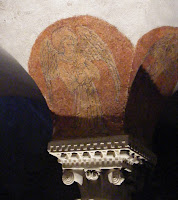 Later we meet up and walk through the Cathedral. The crypt has some fascinating ochre drawings on one wall and on the capitals of the columns, but we’re driven out by what appears, to the ear, to be an organ lesson... and of the Beginner Category. So as it’s dinner time, we discover a new restaurant - given that my usual one is closed on Tuesdays. There are oysters on the half shell, and scallops complete with both their parts in a delicious orange sauce. Plus the good conversation of old friendships. After which, there is bed.
﻿
﻿