Today is the big travel day. Hours in the car. After a full breakfast in the dining room of this 18th century manor, complete with porcelain to eat our croissants and sip our coffee/tea, we walk across the huge garden with its century-old trees to our car. And we’re off. 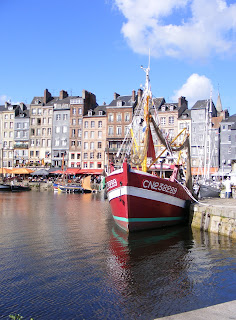 Our route takes us right past Honfleur, so I suggest a stop. It would be a shame to miss it when it’s so close. This is the town Samuel de Champlain sailed out of to "discover" the St. Lawrence and found Québec City. Located at the mouth of the Seine, it still functions as a fishing port. There’s a wooden church with two altars, side by side; the town grew so fast at one point that they merely put an addition on it, a mirror image, instead of building a new church. I’ve never seen that elsewhere. And many of the decorations were carved by the same hands that fashioned the sailing ships, with many of the statues looking vaguely like the figureheads on the bows of Champlain’s and other sailing ships of the period. 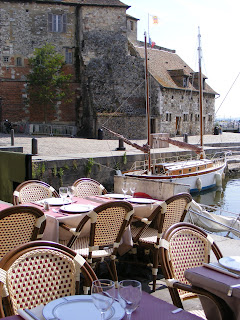 After walking around and buying some chocolates, we decide to have lunch on the harbor, as the hour is appropriate and there’s a long stretch of road ahead. So mussels are ordered, which couldn’t be any fresher.
And then it’s time to cross the futuristic Pont de Normandie bridge and cross much of northern France, up to Lille... where we get rid of the rental car, which proves the biggest challenge of the entire trip. Rush-hour traffic, one-way streets, ultra-narrow down-ramps into the underground parking. But not a scratch on the car - that’s the most important thing. And now we’re pedestrians and train-riders again. So we grab some food on the way back to the hotel - carbonade (beef stew) for me - and it’s sleep in the capital of the North.

Day Four is set aside for finding my friend’s roots. Last night she was ready to just soak in Lille and call it quits. Overnight she’s remembered the name of the town her ancestor left in 1660 to settle a still mostly undiscovered, almost pre-colonial America. So the hotel clerk looks it up on a map, calls a taxi and we’re off.
First the city hall, where the mention of 1660 meets with scarcely more than a yawn. Still, the lady behind the desk does do something vital: she corrects our spelling of the family name. Armed with that, we head off to the village cemetery, where we find the graves of several ancestors. When asked about that name, the man working on a tombstone tells us we should ask the marble cutter because he knows everyone. Unfortunately, that gentleman just left. On the way back to the town center, we pass the marble cutter’s shop and ring the bell. Mrs. Marblecutter notes down four people of the same name. I start calling them as we walk, but that leads nowhere. So we wander around town, and suddenly presto!, there’s one of the names on a doorbell. We ring. An elderly man opens the door... and we meet a lovely relative of hers - how many generations removed remains a mystery. We spend half an hour of his precious time, photos are taken, addresses exchanged and we leave with a new friend. Just time for some lunch in one of the town’s two cafés. Then the taxi shows up at the appointed time, quenching fears of being abandoned in this village outside of Lille. 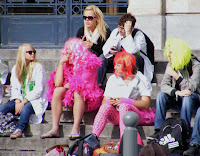 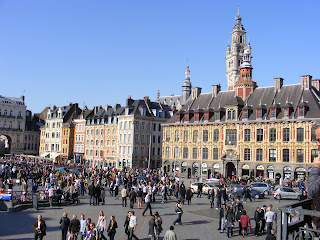 The taxi drops us off on the main square and we giggle at the harmless hazing of first year college students trussed up in silly costumes. The used book market is open in the old Stock Exchange, and it’s impossible not to buy something. My friend sees an Art Nouveau necklace in a jeweler’s window and we weigh the pros and cons of buying it over a cup of coffee in one of the terrace cafés. The verdict is pro, the purchase is made, and we return to the hotel to pick up our luggage and head to the train station. 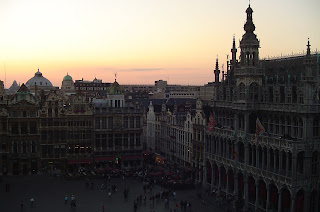 Only a 45-minute train ride separates Lille from Brussels, and a taxi whisks us to our hotel right on the Grand’Place. Although I’d told my friends where it is, they’re amazed when they see it and even more amazed when they look out the window from the hotel room and the square is right there at their feet. This is one of Sandy’s Little Secrets and if it ever disappears, I’ll be bereft. Precious antique furniture shares the scene with Big Lots beds, and a few of the light bulbs in the crystal chandelier will always be burned out, but who cares because... what a view! 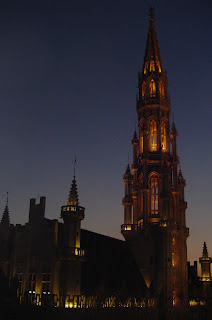 We spend a few hours having a most delicious and filling dinner - smoked salmon followed by various kinds of fish, each more beautiful and perfectly-herbed than the last. The décor is dark wood that’s been around for centuries, the waiter young and friendly, and the time passes faster than anything should, and then it’s time to return to our digs and watch people mill about on the vast square below. The lighting is golden and the moment perfect. 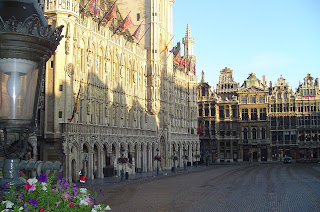 Last morning of the road trip and we’re awakened by the sound of metal beer kegs being delivered to one of the many restaurants on the Grand’Place. Pushing the curtains aside, we discover that a far quieter florist has already set up half his greenery smack in the middle of the square. Suddenly a car pops out of nowhere and makes a mad dash across the forbidden immensity of cobblestones, hoping not to be noticed by the police, but reverses when it sees its escape route is a wrong-way street. After a hasty reconnoitering, it zips out of sight down another street. Obviously this is someone - a tourist? - who got there by mistake, as cars aren’t allowed on the square, not even taxis... only delivery vans. 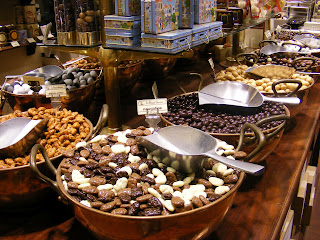 After breakfast, we’re off on the Pursuit of Chocolate, which is never very far away in Brussels. Once that yen is assuaged, we head out to see the Art Nouveau part of town. It begins with a new adventure for me: the Brussels subway. We manage not to get lost and end up on the hill overlooking the Old Town.

Passing a corner restaurant, we see they’re serving mussels - moules - and we succumb. (At least two of us do.) Then following directions from a kindly passer-by, we try to cut through City Hall to the Art Nouveau area. Unfortunately the exit door is locked, so we go looking for another escape route. The caretaker, who has noticed our meanderings, leaves his lunch behind to unlock the door for us, with a heavy medieval key. Yet another random act of kindness, like so many others on this trip. After that, it’s one Art Nouveau house after the other, and a prison that was built to look like a castle so as not to vex the rich people of the neighborhood. The last stop of the day is at Horta’s house, turned into a museum, the summum of Art Nouveau. 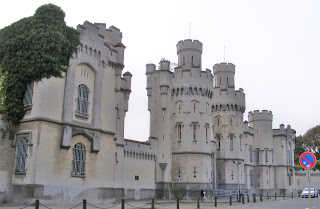 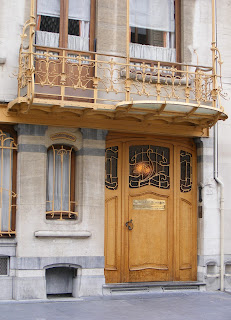 Then it’s back to the hotel to pick up the suitcases and scramble to the station.
The train trip lulls almost everyone to sleep and the arrival in Paris is fraught with rain, recalcitrant cabdrivers and freakishly aggressive (and bad!) traffic. Luckily we make it back to home base unscathed, because that last part was nip and tuck. But we’ve seen so many lovely and wondrous things, and had such good times together. A truly successful road trip.