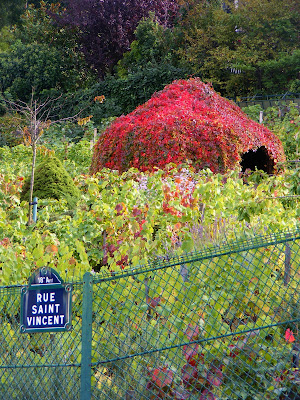 Just as there are bee hives on the roof of the Paris Opera House and a lake with trout underneath it, there is also a vineyard in Montmartre and a cave à vin beneath its City Hall.
Arbois, with its Fête du Biou (see blog, Sept. 6, 2011), isn’t the only place in France boasting a grape harvest festival. In fact, Parisians need travel no farther than Montmartre, which is an easy ride on the Métro. Right here in my own backyard, the first (or second) week-end in October has been celebrated with a Fête des Vendanges as long as I’ve lived in Montmartre. In fact, I just looked it up and it dates back to 1934 - although I’m not sure this kind of thing was allowed under the Third Reich years. 1934! That means this year is (pause while I pull out my calculator) ... the 79th year. 79 and still going strong.
Lately, each year has had a theme.  For 2012 (Oct 10-14), it's "Festival of Delicious Delicacies", which is very general.  Sometimes it's more specific, like in 2011 when it was "Montmartre and the Islands". Meaning their islands, the French West Indies. Which is why that year’s godparents were Jocelyn Béroard - from Martinique and lead singer in the zouk group Kassav - and Laurent Voulzy, composer and singer born right here in the neighborhood but of parents from Guadeloupe.

In all the years I knew the Fête well - given that it passed below my windows and made a halt in the gardens of the Sacré-Coeur, which was my view - it was a parade that gathered together viticultural "brotherhoods" (more recently including some sisters) alternating with what we here in America would call marching bands but could more aptly be labeled strolling bands or ambling bands. Never saw a one of them march, and there was even an American high school band one year. However, the now-popular concept of baton twirling by nubile girls in short skirts and boots with tassels has been adopted, one of the less violent social trends to have crossed the Atlantic successfully. 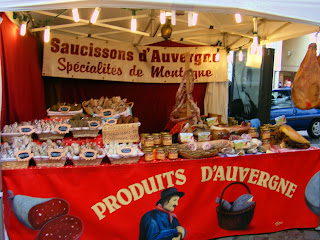 Another critical factor in the Fête des Vendanges is food, of all sorts and from every region of France. After all, wine is viewed by the French as being an accompaniment of food, and much tra-la-la is made of what wine goes with what food... or vice versa. (Do you see the Delicious Delicacies theme popping up here?) There are the requisite sausages, many of which are hard enough to become the blunt instrument that Colonel Mustard used in the conservatory in Clue. There are cheeses of any sort or shape the human mind can imagine... and a few that it cannot. There are spices and herbs, pastries and breads, nuts and dried fruit, including the fabled pruneaux d’Agen, prunes from Agen... sorry, I mean "dried plums". There are booths selling utensils used in the making of foods, and lovely pottery dishes in which to serve said foods. And even how-to cookbooks for the up-and-coming generation which is sadly turning more and more to frozen foods (albeit from the excellent Picard brand) and to take-aways.
The increasing popularity of this Fête has brought about some fun events. For instance, on Sunday - just as some people are going to church - other people will be celebrating a Non-Demand in Marriage. If that sounds strange, it’s because you’re not familiar with a song by Georges Brassens, who was very big in the musical world that (still) is Montmartre: "J’ai l’honneur de ne pas te demander ta main, ne gravons pas nos noms au bas d’un parchemin", or poorly translated: "I have the honor of not asking for your hand, and we won’t sign our names at the bottom of a document". Yes, I know it doesn’t rhyme, but I have limited time to write this. This event takes place on the Place des Abbesses, directly across from St. Jean Church, where more serious Catholics are attending mass at that very moment. The Mayor of the 18th arrondissement, which includes Montmartre, unsolemnly pronounces you fiancés forever and a photo is taken to commemorate the event. This foolishness has been going on since 2007. 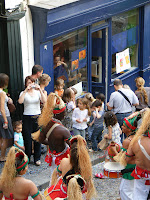 There are lots of events for children, and some for the not-so-children. There are tours of the vineyard, which by then has been picked dry and its grapes sent to the City Hall of the arrondissement to be pressed, bottled and left to age in the cave set up in its basement. Usually the yield is some 1,500 -2,000 bottles of what is lovingly called Clos Montmartre. Money from the sale of this wine goes into the coffers of the district’s social works, including the Petits Poulbots otherwise known as the titis parisiens, street urchins made famous in the sketches of Francisque Poulbot, who used the ill-gotten gains of these hideous drawings to set up a dispensary for the orphans of Montmartre. (So I guess something good did come of them after all.) He also helped save the gardens of poet Aristide Bruant and transform them into a vineyard... which brings us neatly back to the crux of the subject.

In the 16th century, with Montmartre still far outside the city limits of Paris, vineyards spilled down from the top of the Butte to the plains below. By the 17th century, the local white wine had acquired a poor reputation summarized in the saying: "Drink a pint and you’ll pee a quart", thus putting the accent on its diuretic qualities rather than its taste. And that may explain why the vineyards were eventually ripped up. It wasn’t until 1933 that the municipality had 2,000 new vines planted on this little north-facing plot. 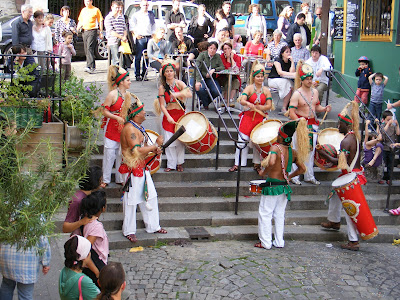 But even more than the wine, I enjoy the music that goes along with the festivities. And there’s plenty of it. Not as much as at the Fête de la Musique (see blog, June 18, 2011) but more and more every year. And as last year was placed under the sign of the West Indies, there was lots of dancing in the streets. Along with hip-hop creole, a concept that fascinates and perplexes me. French film director Claude Lelouch, of A Man and a Woman fame, hosted a performance of The Jungle Book at his Ciné 13 moviehouse-cum-theater. And all the other "pocket theaters" of the neighborhood programmed something musical as well.
Although I missed Montmartre's Fête des Vendanges this year in order to enjoy the Indian summer of Ann Arbor, I’m sure a good time was had by one and all.


For a video on the grape harvest, click on www.youtube.com/watch?v=kuoy-uS3zis
or www.fetedesvendangesdemontmartre.com