Out and About: Exhibits: Arts of Islam at the Louvre 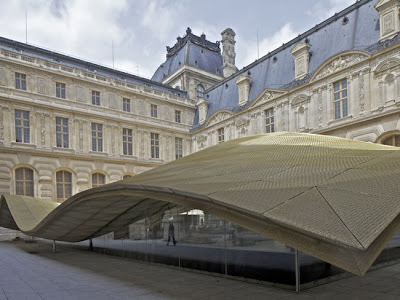 The TV "guide" I read in France had a special insert a few weeks ago. It was dedicated to a new museum-within-a-museum: the Louvre’s brand new Department of the Arts of Islam.
Yes, relations are indeed touch-and-go between The West and many Arab countries right now. But this project has been on-going for years. Then-President Jacques Chirac launched the idea in October of 2002. In July 2008 the first stone was ceremonially set by then-President Nicolas Sarkozy. And in mid-September of this year, new President François Hollande inaugurated the completed complex. So this is a project that has spanned three presidencies.
All this to say that I thought it deserved a look. And as the painters got finished early, and it wasn’t raining yet, that’s exactly what I did. 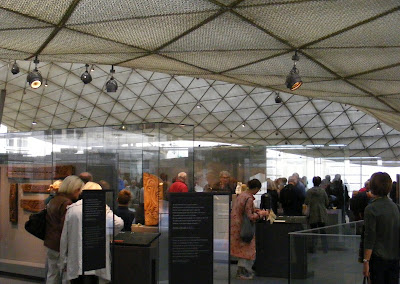 You reach the Arts of Islam collection via the Denon entrance, one of the three leading off from the central area beneath Pei’s Pyramid.

Pressed for space, the Louvre decided to build under one of its two small courtyards, blind areas totally surrounded by wings already chock-a-block with artworks. The architects, Frenchman Rudy Ricciotti from Marseille and Italian Mario Bellini, came up with an amazing blueprint that some have dubbed "The Dune", to give it a catchy nickname like "The Pyramid". This "dune" barely emerges from the cobblestones of the Cour Visconti and remains a respectable distance from the walls of the venerable Louvre, making it a world unto itself.
And therein lay the problem. Excavating to a depth of 12 m (40 ft) meant digging down below the water table of the nearby Seine, and without disturbing the structure of the Louvre... or the thousands of visitors that course through its veins daily. And then there was the small problem of removing all that dirt down one single hallway only 2.7 m (9 ft) wide... and which emptied smack into the heavy traffic of a major street along the Seine! Ricciotti was especially wary of the underground infrastructures, for which no one had drawings or maps: "I was not reassured, digging around under the foundations of the old palace."
﻿ 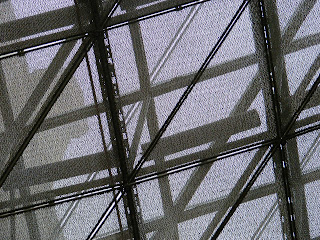 The top level, which is nonetheless underground, is a steel and glass encasement measuring 1,000 m2 (almost 11,000 square feet). For maximum effect, the architects decided to leave space between this "jewelry case" and the hard stone walls of the other wings of the Louvre. After entering from the dark hallway of the old wing, the luminosity is striking, even on a rainy day such as this. Stretching overhead is a semi-transparent ceiling that is actually state-of-the-art undulating metallic gold mesh, made to make you feel as if you were inside a desert nomad’s tent. It provides protection from sunlight for the older collections grouped on this level and makes for better lighting than any other solution would have. Plus it’s way more innovative. 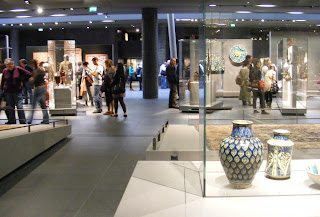 Downstairs, on the bottom level, the walls are a dark cavernous grey - after all, you’re doubly underground - but the lighting is amazing. Theatrical. It brings out the sparkle of the bronzes, highlights the turquoise ceramics and even warms the terra cottas. A chatty museum guard told me that the lighting experts - mostly young - had spent weeks and weeks studying every angle and every reflection before deciding on a final lighting plan.
After a fairly lengthy conversation, that museum guard ended up giving me his copy of the flyer printed up by the Louvre for its staff. Here’s how it describes its own collection: "Made up of more than 15,000 objects, with an additional 3,500 coming from the Musée des Arts Décoratifs, this collection reflects a diversity of artistic creation that spans 1,200 years of history and a territory spread over three continents." The artworks cover the entire span of Islamic civilization, from its founding, down through the years of the Crusades and through the Ottoman and Moghol Empires. 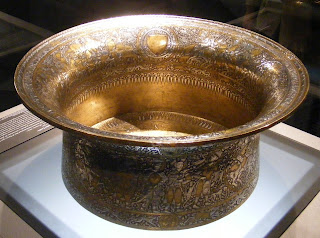 Borrowing again from that brochure, the earliest objects in the Louvre’s collection date from the French Revolution, when the palace was renamed the Central Art Museum (how poetic!) and its artworks had been confiscated from the royals. But most of the objects on display arrived much later, donated by the art lovers and historians of the late 1800s. The Musée des Arts Décoratifs collection, on the other hand, was made up largely of useful objects used as production models during the Age of Industrial Arts. From a chronological viewpoint, the Louvre specialized in medieval objects while the Arts Déco focused on the great Islamic empires. And that is why the two are so complementary. 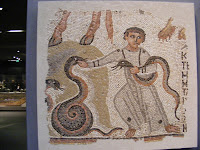 There’s a huge area covered with the mosaic floors of St. Christopher’s Church in Lebanon, which was built in 575 A.D. On the neighboring wall are more mosaic artworks, including a 5th century "Young boy playing with snakes" from Syria or Lebanon. Why the boy was playing with snakes I don’t know, and I doubt if his parents knew he was doing it (unless he was actually one of those carny acts you still see in the souks of Morocco), but it makes for a beautiful piece of art. 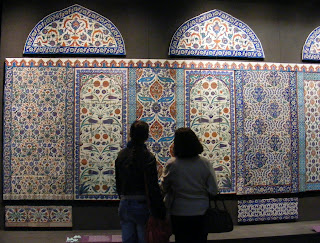 There are colorful tiled murals on the far wall, with a nearby collection of rugs and textiles on one side and another collection of doors on the other. One door from 15th c Spain bears an inscription from St. John, which only goes to show how tolerantly the three major religions - Muslim, Christian and Jewish - co-existed at that place and time. 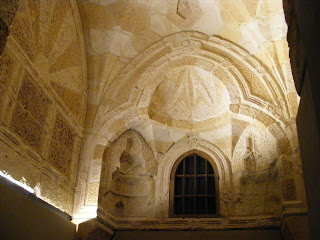 But the cherry on the cake, for me at least, is the vestibule entrance of a home in Cairo from the year 1475 during the Mamlouk period. If this is the mere entry, what must the other rooms have been like!
Once you’ve toured both floors, there are passageways on the lower level from the Arts of Islam collection directly to the Greek Antiquities wing as well as the Coptic Egypt rooms, which is a fitting configuration if you look at a world map.

It was interesting to see the older pieces because they seem to predate the interdiction of representing God’s creatures, whether human or animal. There are plenty of both, but there is also plenty of artwork that is pure geometry, or even artistic representations of written texts, presumably from the Koran.
﻿ 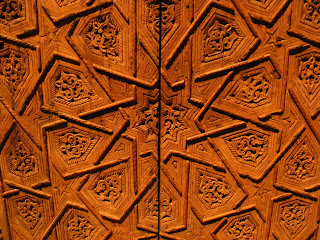 The museum had attracted a good crowd the day I visited, but I noticed only a handful of people speaking Arabic or women wearing some sort of head covering. As it was a workday, the visitors were mostly tourists, I presume. I was glad to see they had heard about this new area, which only opened September 22nd. After all, it cost $125 million, financed by the governments of France as well as Saudi Arabia, Oman, Morocco, Kuwait and Azerbaijan. Plus some corporations. It was good to see they were getting some return on their investment.
But I do hope that visitors from the Islamic world will also take this collection into their hearts. It is extraordinarily rich and varied, a source of beauty and pride, and deserves being seen by everyone, regardless of their religion or culture. 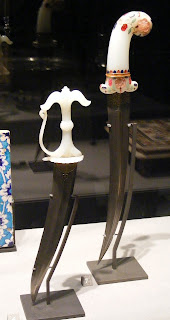 All signs are in French, English and Spanish,
but headphones in other languages are also available.
And there are several audiovisual displays on both levels and frequent maps showing the extent of the various Islamic empires.