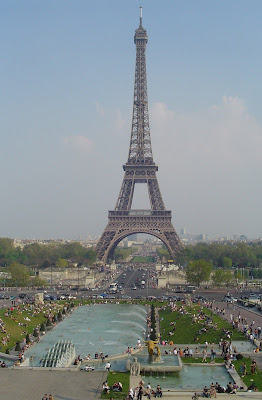 I don’t know what Gustave Eiffel had in mind when he built his tower, aside from creating something totally new, something that had never been done before. He probably believed it would launch a whole new style of building, a whole new approach to architecture. He might even have thought that it would make him immortal.
But did he ever dream that it would one day become the very image of Paris?
I don’t think so.
And I’ll tell you why. Because while it was being built, the Parisian artists and press hated it! They called it an "ink stain on the entire city", a "giant smokestack" that would "humiliate" all the other monuments. Paul Verlaine poetically called it "the skeleton of a belfry" and another voice went even further, calling it "a suppository full of holes"!

In spite of that, and once it was finished, it became an instant hit with the public. Since its inauguration, over 200 million people have paid to go up to one of the Eiffel Tower’s three levels: 7.1 million in 2011 alone, selling more tickets than any other monument in the world. 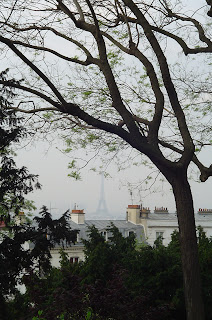 But its life hasn’t always been a bowl of cherries. Built in 2 years, 2 months and 5 days for the 1889 World Fair, by 300 acrobatic riveters (to the tune of 2½ million rivets!), it was almost demolished in 1909 when its original 20-year concession ended. It was saved in extremis by its radio aerial, which became strategic for the French army during World War I. (One message intercepted led to the arrest of Mata Hari as a spy.) It was also used as a relay point for telephones in their early days, and in 1903 a telegraph antenna was added. Because of all these added features, the tower’s existence was prolonged in 1920, for 70 years. During those years, it has served as a radio and later a television transmission tower, as well as a weather observation station.
On the first floor, there’s a museum and a post office where you can get a special postmark for your postcards. On the second floor is the Jules Verne restaurant, very expensive but great food... and what a view! You have to change to the small central elevator to reach the third floor, where you can see a wax Gustave Eiffel welcoming a wax Thomas Edison to his office in the sky. There used to be a TV studio there, and some poor victim (probably the most recent recruit) had to walk up all those steps every morning, before the elevators were running, to start the transmitter up, although I’m sure you’ll be happy to know it’s now automated.  Hazing the new recruit now just means sending them out on the café run.
By the way, the record for climbing those 1,665 steps? 8 minutes and 45 seconds! And that should be an Olympic record if ever there was one. 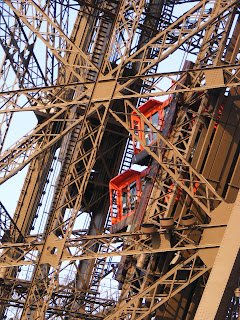 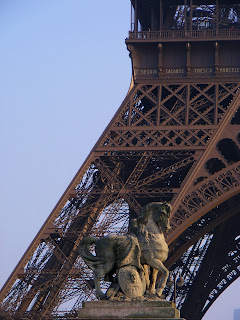 The Eiffel Tower was the tallest building in the world when it was built. And it remained the tallest for 41 yrs, until the Chrysler Bldg in New York City was finished. It towers 300 m (984 ft) over Paris -- 320.75 m (1,052 ft) if you count the TV aerial. But its height can vary by 15 cm (6") according to the ambient temperature, thanks to the expansion and contraction of the steel. It also sways back and forth by as much as 12 cm (almost 5"), depending on the wind.

Its weight is also amazing: a mere 7,000 metric tons, which is actually less than the weight of the cylinder of air that surrounds it. And as for how heavy it would feel if it stood on your toe, its load is equal to that of someone sitting in a chair.
Similar to the Golden Gate Bridge, the Eiffel Tower has to be repainted often - once every 7 years - and that takes 50 tons of paint.

When it was redecorated for the supposedly-apocalyptic Y2K, twenty mountain climbers were hired to scramble back and forth across its entire surface to install 20,000 flashing lights. It took them 3 months. Then again, in 2003, twenty-five more (or maybe some of the same) climbed back up to change those old bulbs for a newer, better variety, and it took them five months to install them by hand, one by one. Those bulbs were said to be good for 10 years, so tune in next June to see if there’ll be a repeat performance.
The two pillars on the Seine side of the tower extend down below the level of the river. In fact the workers building them had to work in watertight metal caissons into which compressed air was injected to hold back the water. Not ideal working conditions. The feet of the Tower were, however, underwater in 1910, when ice floes in the Seine downriver from Paris created a sort of dam and the water backed up and overran the riverbanks. People were being rowed to safety all up and down the river.

But in addition to the humdrum, same-old-same-old of milling tourists and flashing cameras, there have been moments of folly and tragedy in the life of the Tower.

For instance, in 1912, the inventor of the articulated wing tried to become a human Icarus by putting a pair on and jumping from the first level... to his death. He left behind a grieving family, and a 27-cm (11") deep crater.
After the greyness of World War II, a circus decided to brighten up 1948 by walking its elephant up the steps to the first floor. The problem then became to coax it back down!
Within my lifetime - in 1964 - came the only suicide attempt to "fail" (out of 380), when the jumper landed on the roof of a car and lived to tell about it.
And in 1984, two Brits snuck up to the third level, donned parachutes and jumped over the edge, providing an extra thrill for those below waiting hours in line for the elevator. 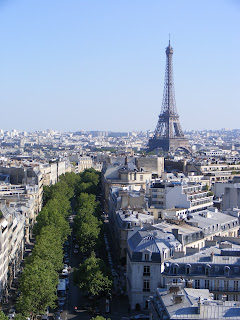 But best of all, perhaps, is 1925, when a certain Victor Lustig sold the Eiffel Tower to a scrap metal merchant. The con man had read all the articles about the possible dismantling of the tower (see above), so he decided to make up some phony documents on the letterhead of the Post and Telegraph Ministry which "owned" the tower. He invited the five largest scrap metal companies to the sumptuous Hotel Crillon on the Place de la Concorde. To keep the affair quiet, he told them that the only people who knew of this project were the President, the head of the Ministry and two other high ministerial officials. Lustig then posed as one of those two officials (the other being dapper Dan Collins), drove them to the tower in a limousine and took them on a tour, after which the most credible of them wrote him a check for one quarter of the total amount as an advance. Lustig cashed it and hopped on the train for Austria.
Unfortunately for him, his greed drove him to return to Paris for an encore. But this time the police were on the case. Lustig still managed to get away and jump on a boat to New York. Whether he then tried to sell the Brooklyn Bridge or not, I don’t know, but you can read all about it in a book called The Man Who Sold the Eiffel Tower by James F. Johnson and Floyd Miller.
So next time you’re in Paris and you sniff at the idea of visiting the Eiffel Tower as being just too touristy, remember... it’s more than just a pretty face. 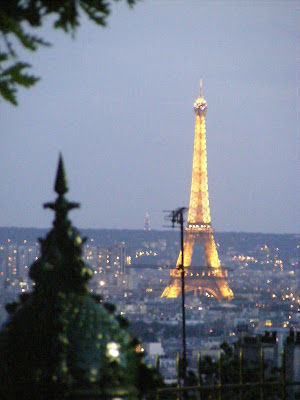 All the photos in this article are mine except, of course, for
the historic ones of the Paris flooding.
Short video of the Eiffel Tower and the view from the different levels:
www.dailymotion.com/video/x55c58_la-grande-dame-de-paris_creation
﻿
﻿