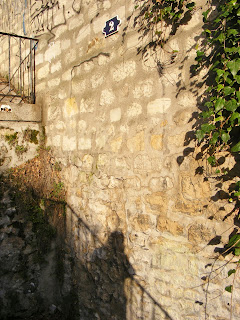 There’s an address in Montmartre.  No. 2 rue du Calvaire.
It’s a blue enamel plaque with the number 2 in white, mounted on a stone wall.
That’s all.
You’ll find it if you take the long stairway spilling south down the Butte to what used to be an art supplies shop but is now a “snack bar” selling “take-away“.  Until almost the end of the 20th century, it sold oil paints, canvases, brushes, palettes... anything and everything needed by the starving artists of the Place du Tertre who have lived nearby since the 1870s in damp, slum-worthy rooms tucked under the rooftops of Montmartre - scorching hot in summer, damp and freezing in winter... and some not too much improved even in my lifetime. 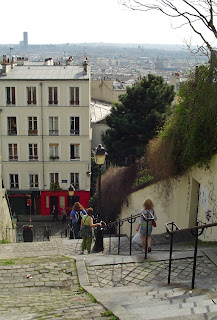 Directly across from that shop is a short walkway, no more than four or five cobblestones wide and thirty-some long, nesstled between those stairs and that stone wall.
No. 2 rue du Calvaire has no door.  No window.  Just the wall plaque.  And yet the placement of the stones below the plaque kind of outlines what might once have been a doorway.  You might just imagine the line of mortar is a bit thicker than the rest and the stones inside that line of mortar seem not to be staggered like the rest of the wall.
Behind the wall is an abandoned garden of grass.  There’s no house and no foundation.  I don’t see how there ever could have been a house there.  It’s just a steep slope with no steps or walk leading anywhere.
A number on a wall around a garden.  That’s No. 2 rue du Calvaire.
One of the mysteries of Montmartre, a strange Alice-in-Wonderland type place within the oh-so-thought-out and rational city of Paris.

There’s another cryptic stone wall on the opposite side of Montmartre.  It also shelters a hidden garden. 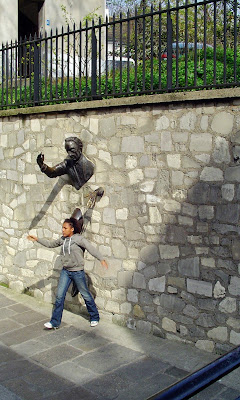 But the one in the north slope has a larger-than-life bronze statue striding out of its wall.  One bronze leg, one arm, the front half of a torso and a head.
It’s the Passe-Muraille, The Man Who Could Pass Through Walls.  He’s the main character from a short story by Marcel Aymé, a French author who lived right there for decades.  The story starts out “Il y avait à Montmartre, au troisième étage du 75 bis de la rue d'Orchampt, un excellent homme nommé Dutilleul qui possédait le don singulier de passer à travers les murs sans en être incommodé.” (In Montmartre, on the fourth floor of 75½  rue d’Orchampt, there lived an excellent man named Dutilleul who had the extraordinary ability of walking through walls with perfect ease.)  The hero of the story, a timid clerk, grows bored with his dull life and becomes a cat burglar who uses his talent to walk through walls and rob banks. Even when he’s caught, he can’t be held in prison because... well, you get the picture.  In his new persona, he takes a mistress, spending passionate moments with her until her husband comes home and he slips away through the wall.
Then one day he takes some medicine that makes him ... well, let’s say, more opaque.   And when the husband comes home and our hero slips into the wall to escape, he can’t get out the other side.  And there he remains, trapped in that wall to this very day, somewhere on the north slope of Montmartre. 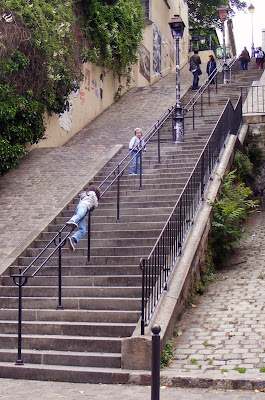 This was the neighborhood my children grew up in.  Rich in art and literature, full of images and stories.  Montmartre has changed, but I'd like to think you could still find it, if you looked hard enough.  Maybe behind doors in walls.  Even if they don’t open.

N.B.  There is no Number 75½ in the rue d’Orchampt, which is a short side-street.  I live there now, and the highest number on the street is 14, I think.  Why did Aymé choose this street?  Who knows, except that he and his wife ate daily at a restaurant a block away from his apartment on what is now the Square Marcel Aymé, by the statue-in-the-wall, and that restaurant was at the corner of the rue Lepic and the dog-leg alley that connects up with (and indeed bears the name of) the rue d’Orchampt.  The restaurant has since been sold to a high-end restaurateur, and both Aymé and his wife are both deceased.