Recipe of the Month: Bouillabaisse

Nothing is more Marseillais than bouillabaisse... unless it’s France’s national anthem, which is actually called La Marseillaise.  But in the realm of cuisine, say bouillabaisse and you’re immediately transported to this port city on the Mediterranean, which has been around since Greek sailors founded it in about 600 B.C.
As a matter of fact, bouillabaisse itself may be Greek originally, but let’s not take that away from the people of Marseille, pronounced "mar-say".  (And no, there is no “s” on the end, in French.)
The name comes from the Provençal word bouipeis, which means “boil the fish”, and is pronounced "boo-ya-bess".  Although it’s often considered a soup, it’s really a whole meal.  That does depend on the amount of fish you put in it... and, of course, the croutons.  As a matter of fact, this dish is often eaten in two stages - first the broth and then the fish - but people who insist on that are really purists and should have their own end of the table.
Bouillabaisse was traditionally made by fishermen using fish from their catch, fish they didn’t sell.  These fish are mostly varieties from the Mediterranean:  rascasse, vive, saint-pierre, congre, daurade, merlan, lotte de mer, grondin.  That makes it somewhat difficult to reproduce here in the Great Lakes (or elsewhere) in its traditional version, but what you basically need is a blend of some delicate, mild-tasting fish (sole, flounder, whiting, mullet, red snapper) as well as some strongly-flavored fish (mackerel, cod, sea bass, hake, haddock).  Ask the fish counter to help you choose a balanced mix.
Besides, remember that the fishermen used what they had left over, so that gives you some leeway.  Just cook with what’s available locally, but make sure the different types of fish have a good contrast in textures and flavors.
Yes, bouillabaisse is a bit of work, but remember that you can make the fish stock the previous day, as well as the rouille (pronounced "roo-yah"), and refrigerate them overnight.  Then all you have to do is just reheat the stock and finish with the fish part of the recipe.  And as I said, it is a one-course meal, so no sides to worry about!

Bringing it all together:

- If you’re making your own fish stock, heat the oil and butter in a stockpot (enamelware is better than aluminum for this).  Add in the leeks, onions, celery, carrots and herbs.  Cook slowly until the vegetables are tender but not browned.   Add the bay leaf and parsley.  Cover with 2 quarts of water and the white wine.  Then add the fish bones, bring to a boil and let cook over high heat for 30 minutes at a slow boil.  (You’ll need no salt or pepper at this stage.)  Strain through a fine sieve and set aside until you’re ready to finish the dish.  You can even put it, covered, in the refrigerator overnight.
Otherwise, bring the equivalent amount of store-bought stock to a boil.

- Place the fish, cut into 2"-thick pieces, in a deep bowl and season lightly with salt and pepper.  Add the saffron, herbs and anise, then the olive oil.  Stir and place in the refrigerate to marinate for about an hour, stirring occasionally.

- Peel, seed and drain the tomatoes if they’re in season, then puree them in a food processor.  Otherwise use the canned tomatoes, drained, or else the easiest:  the tomato paste.

- When you’re ready to finish up the dish, heat 2 T of olive oil, and then add the strong-flavored fish and the marinade.  Let simmer for a minute or two, then add the stock, orange rind and tomatoes, stir and bring to a boil.  Cook uncovered on high for 5 minutes.  Add in the delicate fish and boil 10 minutes more.  (I marinated them in two separate bowls, so I could easily tell them apart.) 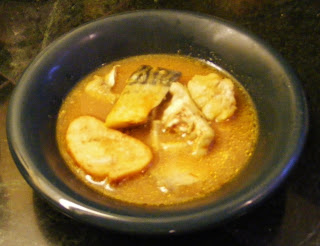 - To serve up, place slices of stale French-type bread or croutons in the bottom of a soup tureen or individual soup dishes and ladle the bouillabaisse over the top.  Accompany with a rouille sauce which you can buy in a specialty shop, or else blend all four ingredients above in a food processor until smooth, if necessary adding bit by bit just enough olive oil to obtain a mayonnaise-like consistency.

Accompany with a chilled rosé from Provence

Note: Everyone thinks that bouillabaisse is a big deal to make, but it really doesn’t take much prep time.  I opted for the tomato paste and also used the orange rind cut into strips, which I fished out (pun intended) before serving, and a native of Marseille told me it was "just like at home".  So there are shortcuts you can use to make things easier.  If you get the fish market to cut the fish up for you, if you make the fish stock the previous day or if you buy a good fish stock (try it first before you start the recipe), if you can find a jar of rouille... it takes amazingly little time.  Good, flavorful stock and fresh fish of different sorts are the keys here.  I made the stock myself and it took only 15 minutes of prep time and 30 minutes of cooking time.  The fish took 10 minutes for the marinade and then just sat overnight in the fridge.  The final bit took no prep time and only 25 minutes cooking time.  It was pretty painless.  Of course, I cheated and used a prepared rouille that I had, but even if I’d made it, it would have taken just 5 minutes maximum in the food processor, plus the time to boil the potato in advance.  So don’t be discouraged by the number of ingredients or the reputation of this dish. The result is colorful, hearty and delicious.

(Ground saffron loses its flavor quickly and sometimes is cut with turmeric, so it has less flavor in that form.  Buy the little plastic packets of saffron threads, which are far better.  1 gram equals about 1/2 teaspoon, so I used the entire packet.)