Terrorism in the Global Village 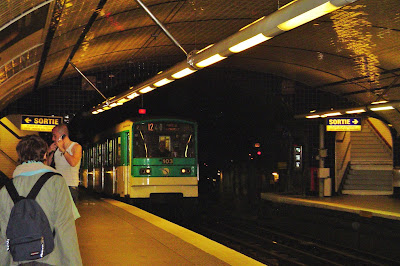 This is the first time I've posted something "topical" in this blog.  Blame it on the flashback I'm having.  I've narrowly missed three such terrorist explosions, this one on July 25th, 1995.  My way of pushing it off to a corner of my mind was to write this back then, the first in my Postcards of Paris articles.  And get on with my life.  Barring which, the terrorists win.
So now that you know what it is, you can close this page or go on to read it.

The day started bright and clear, and slipped gently through the hours as the thermometer inched higher, making the prospect of a backyard barbecue welcome.  A farewell party for a friend of 18 years.  More than a friend.  A fellow expatriate.  Who now was going back, flying across what the British mockingly call "The Pond" to America with her two sons.  It's hard to say good bye after so many years.  Wondering just how final a good bye it could prove.
So thoughts were riveted on the void that wasn't yet, but soon would be.  Not on the tunnel of the Regional Express subway as it glided inexorably from station to station on Line B, cutting Paris in half, north-south.  Châtelet ... St. Michel... Luxembourg... Port Royal... Denfert... A much-traveled line, pumping inbound suburbanites to their city jobs every morning.
Now the workday was over.  They were on their way home.  And I to a party.
I always take the RER to cross Paris.  Less stops.  Shorter travel time.  Quieter, roomier, more streamlined cars designed in the Eighties for a new generation of mass transit.  Computer-controlled to speed one just behind the other, especially at rush hour.  Progress.
Which is why it seemed strange, as I arrived at my station and walked up the stairs and out the doors, to see the oncoming RER stopped on the track.  Traffic must be backed up, I thought, and walked on to the party, thinking no more about it.

About an hour into the festivities, my friend's phone rang, and it was for me.  My son in L.A.
A tense "Are you all right?"
And then the news, from halfway around the world.  Two trains behind me a nameless killer had left a bomb under one of the seats in the last car, the car I always run to catch as the train sounds its imminent departure.  Four dead.  Dozens more on the critical list.  Legs instantly amputated by the blast.
I reassured my son, hung up and announced the news.  Everyone shouted "What!"  We stared at each other.  Someone turned on the TV and we all sat in a silent row, eyes riveted to the screen, trying to understand the horror.  Who?  Why?

How the world has changed since the snug safety of my childhood Fifties.  Here was terrorism for no known reason by no avowed person.  How could anyone understand!  It has happened in Paris before, but not for ten years.  Now it will all start again.  The trash cans in the stations nailed shut.  The warnings broadcast over the PA stations.  The darting, apprehensive glances among passengers.  The willful choosing of the "right" car.  The safe one.
Terrorism has become a global phenomenon in a global village.  There we were, unaware of how close we were to the epicenter of hatred, awakened to our vulnerability by a call from the other side of the world.  Two trains.  Five minutes.  So tenuous a distance.
On the way to a party.  To say good bye.  How fitting a lesson.