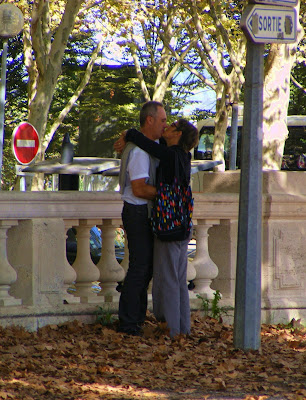 One of the first things foreigners notice upon arrival in France is The French Kiss.
No, not that French kiss.  La bise.  The kiss on the cheek that French people exchange each time they meet or part.  La bise is an Art.  Or a Science, depending on how you look at it.
The first hurdle to clear is determining at what point in a relationship you should shift to la bise from the handshake (always a neat "one-up-one-down", never the American pumping motion).  If you close in for the kill too soon, you'll be categorized as "fresh" (for men), "loose" (for women)... or the all-time faux-pas in France "too familiar" (gasp!).  If, on the other hand, you withhold your cheeks longer than is appropriate, you will be viewed as "cold", or even worse "haughty".
Men often stick to the handshake with other men, or a manly hug, except if the other man is a relation, a childhood friend or a "significant other".  Women tend to be less reserved, switching over more readily and proffering a greater number of pecks on the cheek.  The older of the two parties is always the one to initiate the switchover.  And if one party is a man and the other a woman, there is the usual social confusion about who decides when.  (Does the woman offer her cheek or does the man just dive in?)
One fairly hard and fast rule:  always start to the left.  This will avoid the confusion which inevitably occurs when both parties head in the same direction, ultimately bumping noses.  Secondly, if eyeglasses are worn by either party, or both, they should be removed (as one removes one's gloves in polite circles when shaking hands).  This eliminates the clinking of glasses, which, though a cheerful sound, is far more appropriate with fine crystal and champagne toasts.
So now we have determined when to start and in which direction.  This leaves the question of number.  How many is enough?  One, as in the British or Yankee peck on the cheek, is out of the question.  That would hardly be worth shifting from the handshake. The options are two, three or four.  No more.  Mais non!  Candidates for a two-sy are the newly-kissables or long-standing acquaintances.  When the friendship shifts gears, you up the ante to three, a nice round number.  That "one more" shows the kissee that he/she has become special and merits more affection.  Four, however, seems to be the standard in Brittany and the French West Indies, as well as among "close" friends, ranking immediately prior to the abandoning of cheeks for lips (see photo above).

Now that you know the rules, such as they are, you can practice, provided you find a willing partner.
At this point you will discover one of Einstein's laws of physics:  Two cheeks lying on a parallel plane will not meet.  Therefore, it is physically impossible for you to plant one on your partner's cheek at the same time as he/she is planting one on yours.  The French kiss solution:  lean forward, align cheeks (almost brushing), and make a recognizable yet discreet smooching sound.  But never, NEVER, under any circumstance, actually kiss the cheek in question.  This would be every bit as gauche as making contact with and actually kissing a hand in a baise-main, if anyone actually kissed hands any more.  (Some do; they usually are quite elderly and sport carefully trimmed moustaches.)
So now you have your instructions.  Please pair off and start practicing.
We'll be having a quiz at the end of the hour.