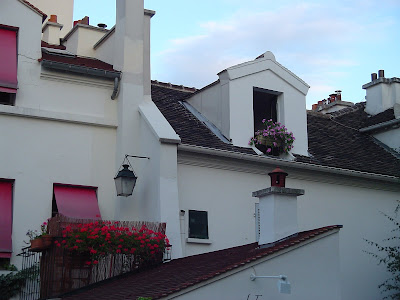 In an interview, French actor Jean Rochefort, who played Don Quixote in Terry Gilliam’s ill-fated "Lost in La Mancha", commented on how actors lose touch with the passion of their beginnings and end up accepting "comfort roles", the ones that pay the bills. "You give up your freedom with the first fridge. My friend Alain Cavalier, who sleeps on a mattress on the floor and leaves his camembert on the window ledge, is no less happy than the rest of us! Cavalier does only (the films) he likes. I often tell myself we should all have a camembert on the window ledge."
Now I know that sounds either very profound or very absurd to most of you. But having moved to France in 1968, I know exactly what Rochefort means. He means that having less leaves you free to feel more.
The camembert image catapulted me back more than 30 years to a tiny garret room under the roofs of Paris where the toilet was down the hall and I had no fridge but I did have a window ledge, and that’s where I kept my perishable food. In the winter it made a good fridge, but in the summer it was good only for keeping the odors out of the room! On your way home, you bought only what you ate that day, saving a bit of butter or a drop of milk for the next morning’s tea. 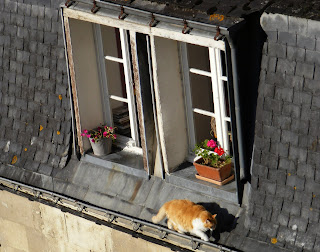 There were flaws in this system, such as overflying pigeons or stray cats roaming the rooftops of Paris. But you had your secret weapon, the scrap of oilcloth (saran wrap hadn’t reached France yet), and you rolled your butter in it. And sometimes you borrowed a few ice cubes from a more affluent friend.
Ice cubes, too, could be different. Often small plastic balls with water inside so they were reusable. (Disposable wasn’t a European concept then; World War II still loomed in the memory of those who manufactured things). As a post-war Baby Booming American, the closest I had come to the concept of the plastic ice cube was the condom, so I hated finding one floating in my drink. 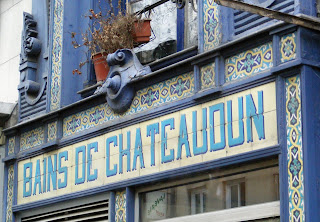 Flying to Paris in the late Sixties and early Seventies was like time travel. You boarded the plane in America in 1968 and landed twenty years back in time. Many Parisians still frequented the "bains douches", public bathhouses descended from the Roman baths... very clean, where whole families arrived with towels and soap and waited their turn for a private shower stall.
And then there were telephones. Or the lack thereof. When I asked for one, I was told there was a two-year waiting list in my neighborhood. So for urgent but mundane issues such as meeting for dinner, people sent "pneumatiques", little blue notes, like telegrams. They were delivered through pneumatic tubes (like those at the bank drive-thru window) that ran from post office to post office through the tunnels of the sewer system. When they reached the nearest post office to their destination, they were delivered by some young man on a bicycle, an entry-level job on the way up the civil service ladder.
For entrepreneurs, one good way to strike it rich was to rent a shop and buy washing machines and open a laundrette. Every machine was taken every waking moment because no one had a washer at home. Kitchens were too small, and bathrooms were just converted closets. So you brought a good book and sat down and waited.
If you had a TV, or knew someone who did, or if you went down to the café in the evening, you could watch the one show playing on the one channel. It was often an Ed Sullivan-like entertainment show, or a stage play filmed at the theater before a live audience. Broadcasting started around 7 pm with a children’s show and the news, then the prime-time show. There was no morning television, just a bit of news at noon. Between the two, there was a clock with a second hand that ticked off the minutes until showtime. And there was a little toy train that ran across a toy countryside to let you know showtime was coming closer.

Now, every French home has a refrigerator and a phone plus a cell phone, and a washer (and sometimes even a dryer), and at least one car and one TV. There are still just six public channels, but if you have cable or a satellite dish, you can plug into the universe with its plethora of channels in numerous languages for every imaginable taste. The bains-douches is no more, disappeared along with the pneumatique, and there are precious few laundrettes.
Times were simpler then, a bit less comfortable perhaps, but people talked more to each other. They went out more. They met over a coffee or a meal to discuss the day’s happenings and the road their lives were taking.
France has caught up with America. I board the plane in 2011 and get off still in 2011. It’s familiar, globalized, but somehow much of the poetry is gone. And the window ledges are bare.