Out and About: Exhibits - Madame Grès: La Couture à l’Oeuvre 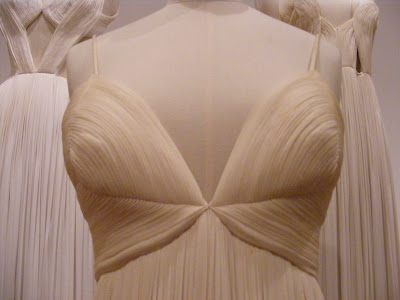 I first became interested in haute couture thanks to Audrey Hepburn. In her movies, she always wore these wonderful dresses and I learned that they were usually designed by Hubert de Givenchy. Sabrina, Funny Face, Breakfast at Tiffany’s... all were by Givenchy. He was the first haute couture designer to break into costume design in film and Audrey Hepburn was his favorite model. Together they defined elegance to me.
From there, I branched out to explore other fashion designers... Elsa Schiaparelli and the modernistic Cristobal Balenciaga came first. Because their names sounded exotic. Romantic.
Then I discovered the simplicity of Christian Dior - the Little Black Dress - and Pierre Balmain, Mr. Sophistication. Plus a bit of the androgynous Coco Chanel, who came onto the scene well before feminism.
Ultimately I began delving into the history of haute couture. And I found it fascinating. It was, at one and the same time, a breeding ground for outsider opposites: feminists yearning to breathe free in a man’s world and homosexual/metrosexuals wanting to liberate their feminine side. It seemed that if you had something different to say, you could only say it through fabric.
I learned about the reign of Charles Frederick Worth at the end of the 19th century, the first to dictate fashion instead of just knocking off knock-offs of what the nobility was wearing. And then in the period just before World War I, Paul Poiret took the Orientalism out of art and draped it onto the female body... before it was widely accepted that Woman had one to drape. At more or less the same time as Poiret appeared the first female, Jeanne Paquin, who was also the first Parisian couturier to open multiple branches of her fashion house abroad. In the Roaring Twenties came Jeanne Lanvin and Jean Patou - both of whom still exist in the world of perfumes. Lanvin was all trimmings, embroidery and beaded decorations in light, clear, floral colors. Patou, who was never mainstream but always original and simple, worked with the Cubist influence that later led to Paco Rabanne and Pierre Cardin. After the end of the war arose the timeless Madeleine Vionnet, who became one of the leading couturiers of the Thirties, basing her flowing gowns on the drapé of ancient Greek statues.
And it all seemed to be happening in Paris. 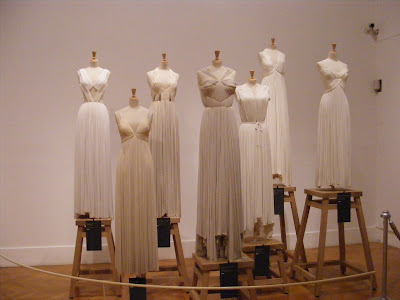 The above is a prequel for why I went to see Madame Grès: La Couture à l’oeuvre, an exhibit at the Musée Bourdelle. It’s the first retrospective show ever of Madame Grès’s work: 80 of her dresses - ranging from 1934 to 1989 - plus 100 sketches and 50 original photos. All this is usually housed at the Musée de la Mode in the Palais Galliera. But as the Galliera is being renovated, these fashion masterpieces have been showcased in the studios where Antoine Bourdelle sculpted his massive statues and other works of art. 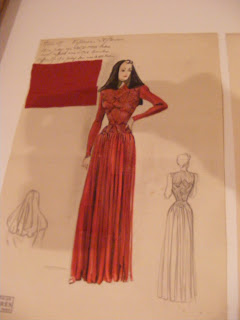 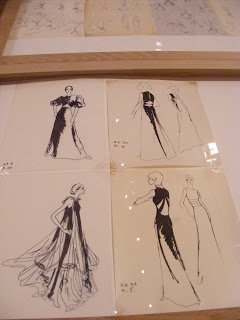 Similar to Vionnet in her use of the drapé and bias cut was Madame Grès (1903-1993), aka Alix Grès, formerly just Alix... and on her birth certificate Germaine Emilie Krebs, a much less suitable name for haute couture. It is said that Mme Grès didn’t know how to sew, but she knew how to cut. And by cutting the fabric diagonally - soft, gentle fabrics such as crepe and chiffon and especially jersey - the creations of Mme. Grès would cling attractively to the body while remaining totally comfortable. A woman’s body could have flaws and she’d still look like a goddess... plus taller. Natural, yet elegant and sophisticated - those words again! - they made women look glamorous and oh so womanly. Not quite naked, but as good as, if not better. 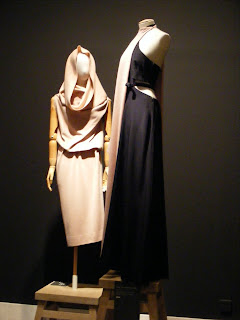 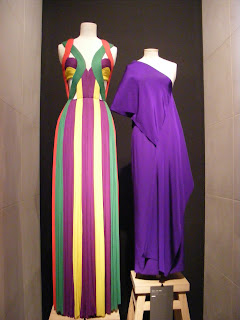 Huge volumes of fabric were needed for every single dress, especially the floor-length gowns. The pli Grès that she perfected (only one of three types of pleat that bears the name of its creator) is made during the construction of the dress, then sewn into place. With her technique, 3 meters of fabric become a mere 7 cm. You do the math. 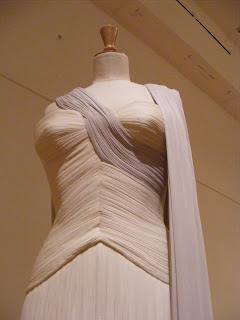 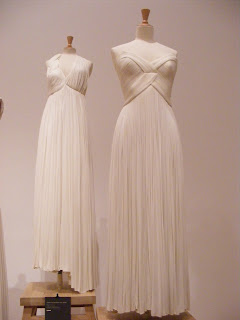 While her sleek, fitted forms hug the body, they respect a woman’s feminine shape. Her sculpted yet flowing gowns - in which the body becomes an integral part of the dress - fit right in here at a sculptor’s studio. Her work is a far cry from the off-the-rack ready-to-wear which Grès abhorred. And it served as an inspiration for many of the couturiers who followed, including Yves Saint-Laurent. 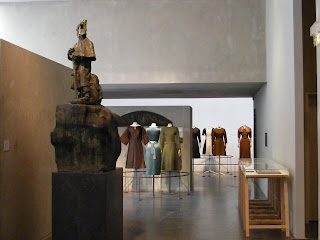 Among the famous women who chose the creations of Mme. Grès to make them even more beautiful were Marlene Dietrich, Greta Garbo, Grace Kelly, Edith Piaf, Jacqueline Kennedy and the Duchess of Windsor.
But why hold this show at the studio of a sculptor, you may ask. Madame Grès said many times throughout her life: "I wanted to be a sculptor. For me, it’s the same thing to work the fabric or the stone".
So although the Musée Bourdelle is a bit off the beaten museum track, it’s well worth the Métro ticket. Think of it as a two-fer: sculpture plus haute couture. Which was the curator’s point, after all.