The Stuff that Dreams Are Made of: Concorde

Today will see the lift-off of an experimental hypersonic "aircraft" (don't know what else to call it) that will fly at 20 times the speed of sound and reach anywhere in the world within an hour.
Those were the headlines this morning, August 10, 2011.
And that piece of news sent me hurtling at many times the speed of light back in time. Back to my one and only flight on the Concorde supersonic jet. 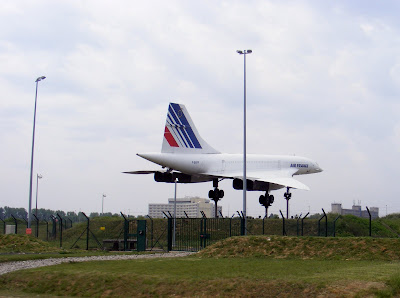 It was Friday May 30th, 2003 (even though my Flight Certificate says May 28th for some reason). Air France flight AF002 from Paris Charles-de-Gaulle to JFK in New York. I had always dreamed of flying on this miracle aircraft, ever since it took off on its first test flight on March 2, 1969. But I never had the money.
Not that I really could spare the cash in 2003 either, but it was the last chance to see my dream become reality. So I ate pasta night after night after night for half a year, recycled my old clothes, took mass transit instead of taxis, forsake the movies... I cut corners wherever I could and paid the rest on my credit card for months. All because I wanted to fly faster than the sun.
On the momentous day, I was out at CDG Airport long before the appointed hour. Which wasn’t a problem because the Concorde had its own special waiting room. As it was morning, they were serving scrambled eggs, fresh fruit, still warm croissants, freshly-squeezed juice and of course champagne. As much champagne as you wanted.
I sat down in the leather easy chair with a glass of bubbly in my hand. An elderly French lady with impeccable hair looked over at me. "Do you understand this paperwork?" she asked. She was talking about the customs form for entry into the U.S. "Je ne parle pas anglais" (I don’t speak English.) So I helped her fill it in. Over another glass of champagne, she told me her story. Her husband had been a test pilot. He had wanted to fly in the Concorde. But he’d crashed in one of those test planes (not a Concorde) and so now she was taking it for him. And then flying right back to Paris on AF001 the next day, the very last flight ever on the Paris-NYC route.
Another of the 100 passengers was an unlikely young hippy-looking man with a full beard. He stood out from the businessmen and the seniors who made up the bulk of the passenger list. We ended up talking. He was a carpenter from the pine-covered hills of the Vosges region in the east of France. Like me, the Concorde had been his dream, and like me he’d never had the money to take it. This was the last chance for both of us.
As we sat at the window and watched the slender silver aircraft being prepared, more and more people appeared around it on the tarmac. All of them were wearing Air France uniforms, whether flight or ground crew. And they just kept arriving. There was much nose-blowing and eye-dabbing among both men and women. This was no ordinary flight for them either.
Finally we were allowed to board. An elegant, attractive flight crew welcomed us into an interior unlike that of any other plane I’d ever been in. A very narrow aisle - for which, I learned, a special drinks and food cart had had to be designed. No overhead bins, so you could stand up from your seat without crouching. And what seats they were. Two on either side of the aisle. Plush, with wide armrests. No need to be mashed into your neighbor’s lap - who ended up being the impeccably-coiffed French lady. And all the legroom a shortish-but-leggy person like me could ever wish for. 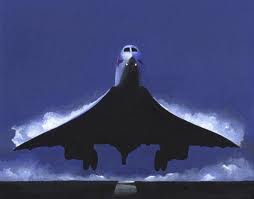 When it was time to pull away from the terminal, past the honor guard of probably all the Air France staff in all seven of CDG’s terminals, two airport fire engines moved into position on either side of the Concorde. They turned on their hoses and we passed under a watery arch out to the runway. There was no waiting in line for take-off. This was the flight of the day for the control tower. The last time they sent this beautiful silver bird soaring, and they were not going to have it waddle off in fits and starts. The captain was probably in no mood either. It was about one o’clock, I think.
When we arrived in New York, it was only 10 am. We arrived before we left. At least that’s the way I like to think of it. We flew faster than the sun. and the airport fire trucks were there to meet us with a water cannon salute in the colors of the French flag: bleu, blanc, rouge - blue, white and red..
For the 3 hours and 45 minutes (more or less) in between those two moments, I sat with my nose pressed to the window, occasionally glancing up at the digital speedometer, which was proudly hovering at Mach 2.04 for most of the flight. (We had left a bit late and the captain was determined to arrive on schedule this one last time.) Twice the speed of sound... and a bit more to boast about. I ate a lunch of lobster and more champagne at 1,350 mph. And so high up - about 10 miles high - that I could see a bit of the curvature of the Earth far below.

As I always ask questions, I learned that of the 9 crew members, most were retiring, even early. Captain Chatelain (age 57) said he couldn’t bear to fly anything else after the Concorde because it was the "Formula 1" of the air. The co-pilot and navigator were too young, so they would be forced to downgrade. The same was true of the flight attendants; half were retiring and half were having to get used to slumming. One of them had a tear in his eye when he said, "I just couldn’t bring myself to fly on the ordinary planes... not after this."

In New York, I had a connecting flight to Detroit, and when I checked in at La Guardia a good hour of transit later, I was still smiling. The woman behind the counter told me I looked very happy, and when I told her why - that the big sappy smile was from flying on Concorde - all her colleagues came over and started peppering me with questions. They, too, were sad to see it leave the skies.

Why were Concorde’s wings clipped? On a day-to-day basis, the SST broke even. But there were some big expenditures from time to time, and that put it into the red. And as the planes were about 30 years old, large investments were going to be needed in the on-board systems. Plus after 9/11, there was a big drop in passengers for a few years, and that hurt financially.
And then there was the accident.
To be fair, it was the only one in 30 years of flying. Not so bad a record, to say the least. And it really wasn’t the plane’s fault. The investigation showed that a piece of metal strip had fallen off the Continental aircraft that had taken off right in front of it. When the Concorde’s wheel ran over it, the tire blew and the strip was propelled up and through the wing, severing the fuel line. Concorde took off already on fire. But in spite of the fact that two of the engines were out, the pilot managed to steer it to a place where it would do the least damage... no mean feat in that crowded, highly-populated part of the Paris suburbs. The crash killed all 109 people on board - crew and passengers - as well as four people in a local hotel on the ground.

I’m sitting here crying silently as I write this. Concorde was a dream. A dream that lasted 30 years. A dream that should still be flying. And now it’s gone.
The plan from the very beginning was that these jets were supposed to be only a prototype for a bigger, faster, quieter, less fuel-consuming model, the Concorde "B" model. It was never put into production, but those plans were first discussed only four months after the start of scheduled services in 1976. It could have been ready by the Spring of 1982. With it, the airlines would have seen improved performance: lower direct operating costs, a greater operating range, reduction of environmental effects, and yet crew training and maintenance procedures would have remained the same. The noise level at takeoff and landing - often maligned but actually the same as a B-707 or DC-8 - would have been improved by high-bypass jet engines that could satisfy the new international noise rules. The greater operating range would have meant U.S.-Japan links in two sectors and Europe-Australia in three. And a reduction in fuel consumption - one-third of the direct operating costs - would have made it even more marketable and allowed the airlines to reduce the ticket price. That was partially because the plane would be lighter, with control surfaces, service doors and the like made out of carbon fiber. The website dedicated to Concorde put it this way: "If the B model had been built, the range of Concorde today could have been pushing 5000 miles, as well as benefitting from the increased subsonic performance and reduced noise emissions."
And if that had happened, yours truly would have another sappy smile on her face... all the way across the Atlantic.

An experimental vehicle that can fly at 20 times the speed of sound and reach anywhere in the world within an hour is due to lift off today.
http://www.concordesst.com/