Not April, But August in Paris 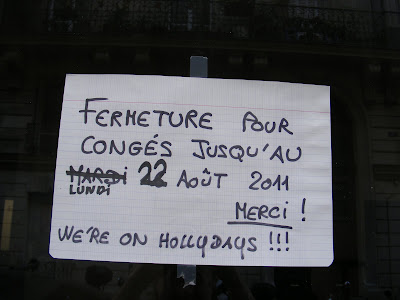 Having been on this planet for many years, I can remember when flying was exciting. Now you hope it  won't be exciting. Exciting could only be bad.
But in spite of that, I persist in flying back and forth across the Atlantic several times a year. Usually not in the summer though. But because of a wedding in Paris, I had to change my routine, so here I am in Montmartre in August.
And that’s a mixed bag.
First of all, and on the good side, it takes far less time to get into the city from the airport. Because much of the Paris region is en vacances - on vacation. And that means no horde of commuters honking and tailgating their way to work. So my taxi glides along the highway, in spite of continuing work on the tunnel just north of the city limits. Amazing! 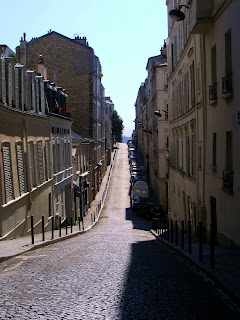 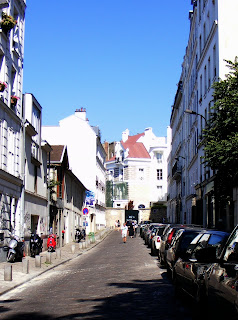 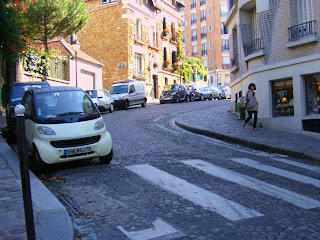 My apartment is waiting for me, with my daughter already in it. She’s here for the same wedding. But when I go to cross the building’s courtyard, I get a major surprise: the fig tree has keeled over! Its top branches are leaning against the building, but luckily half of its roots are trapped under the wall separating us from the building next door with the other half still in the ground. I’m frankly amazed at the number of figs that poor tree is trying valiantly to ripen, figs that are now at eye-level. To get to my door, I have to push aside the branches. My daughter tells me it was like that when she arrived four days ago. There are so few people "in residence" right now that no attempt has been made to stand the poor thing back up. Brave little fig tree, still hanging onto its leaves - or maybe that should be the other way around. 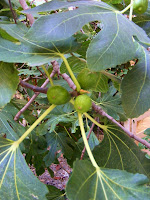 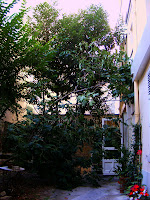 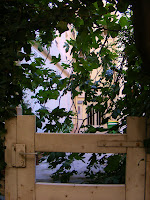 My daughter and I decide to go to lunch, it being lunchtime. So we head off, through the fig branches, to the couscous restaurant, which has become my traditional First Meal in France. Only to find someone else behind the bar, someone decidedly un-couscous-looking (read: "French"). The restaurant is still the restaurant, he reassures us, but the owner/cook is "en vacances" and won’t be back until the end of the month. So the kitchen is closed and we have to move on to our fall-back restaurant, the little Cambodian place around the corner, which is open... and delicious. 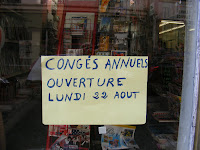 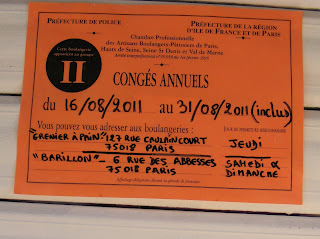 Then it’s off to buy a Pariscope, a little magazine that comes out every Wednesday and tells you absolutely everything going on in Paris: theater, films, museum exhibits, concerts, conferences, sports... Sometime this past spring the big press/book shop on the Place des Abbesses closed, so now you have to go to a tiny shop in a side street to get your newspapers and magazines. Which we do. When we get there, we find it closed - en vacances - until the end of the month. So we head down to the Boulevard, where there’s always a kiosque journaux (a newstand) by the Métro, only to find that... of course, it’s closed! These guys never close! But this kiosque is resolutely and unmistakably en vacances. So is the one at the next Métro stop. In all my years in Paris, this I’ve never seen. And then, out of the corner of my jetlagged brain, I remember another kiosque, just a little further down, under the trees... which is open! Run by someone from southeast Asia, of course, who probably didn’t get the memo: It’s August! Close up, already! 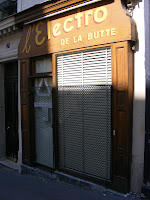 Yet another job that needs to be done is to replenish my garden. Many of the flowers died off from a surplus of rain plus a lack of warmth this summer. They must have thought autumn had come. The garden is sad and colorless without them. But no problem; there are five places to buy plants in my immediate area. Unfortunately, four of them turn out to be closed, en vacances, and the one that’s open doesn’t have what I want. 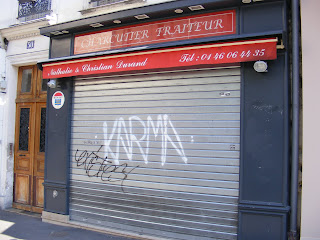 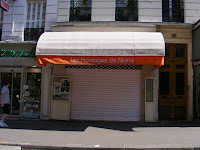 Then on the way home, we do some food shopping. All the small specialized shops are closed, because they’re... (all together now) en vacances. Cheese shop, chocolate shop, the deli where I buy those delicious roasted chickens, the shop with the pâté specialties from the Massif Central... Luckily for us, the G-20 mini-supermarket is open, albeit with only one check-out counter running, and we rejoice at getting some essentials. My favorite fruit-and-veg shop is open, but I don’t recognize the man behind the counter; the regulars must be en vacances. And then, the oh-my-God moment. Of the four bread shops in the area, two are en vacances and one is closed because of electrical problems, leaving only one... the least tasty of the four. 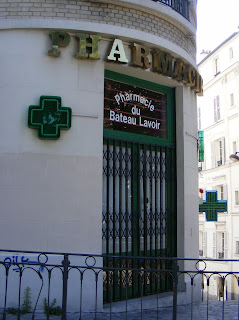 I’d go drown my sorrows, but I think my little wine shop with the bar in the back just might be en vacances too, because they’re closed on a day when they’re normally open and booming with mid-afternoon apéritif business.
My head is starting to ache - along with my feet from all the walking - and I’d go get something for them at the pharmacie at the end of my street, but... (fill in the blank).
Such are the tribulations of a Parisian in August. I think I’ll just go sit in the garden and read a book. After all, it’s a nice summer evening. And that doesn’t close in August.