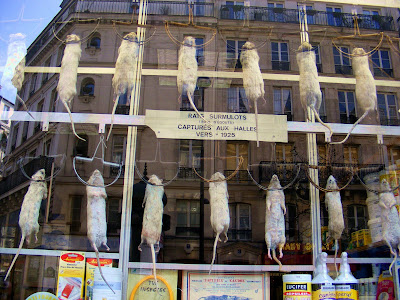 ﻿ There are two kinds of animals on Earth: wild ones and domesticated ones.
And then there’s the rat.
It’s not wild, really, but I don’t think you could say it’s been domesticated, even though rats rely on man as a source of food.
I’m not talking here about the asepticized white rats that run this way and that in lab mazes all around the globe. I’m talking about your ordinary, run-of-the-mill, it-bit-my-baby rat associated with unsavory slums or abandoned buildings. The unmistakable - even in Latin - rattus, whether black (rattus rattus) or brown (rattus norvegicus... although why Norway got the honor of having the brown rat named after it, I can’t begin to tell you). 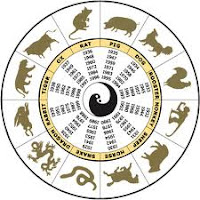 The first of the twelve signs in the Chinese zodiac is the rat, which they claim is "spirited, witty, alert, delicate, adaptable and full of vitality". And as rats are said to have originated in Asia, maybe the Chinese are right. But for most of us, rats just symbolize unsanitary conditions and diseases such as the bubonic plague (for the latter, see Albert Camus).
Personally, I’ve seen mice in one particular Paris Métro station, scurrying along the rails, scavenging for bits of food commuters let drop. But a rat I’ve never seen, even though I’m told they’re around.
In fact, the only time there were no rats in Paris was in the freezing winter of 1870-71, when German troops surrounded Paris during the Franco-Prussian War, cutting it off from any source of food. On October 7th one of the government’s ministers, Léon Gambetta, escaped in a hot-air balloon (taking off from right below what would become my home a century later) and flew over the German lines to set up a parallel government farther south. Behind him, he left two million starving Parisians who took to eating their horses, cats, dogs... even the exotic animals in the zoo. After five months, Paris capitulated, but then came the Commune (think Les Mis) and by the time that was over in May, there was reportedly not a single rat left in the entire city.
Leap forward in time to General Charles de Gaulle, President of France from 1959 to 1969. As President, he lived in the Palais de l’Elysée, the White House of France. From his upstairs windows, he could look out over the graveled courtyard to the posh buildings across the Rue St. Honoré. On one of those buildings just opposite his windows was a sign that read ATTILA, Fléau des Rats - a reference to Attila the Hun being the Scourge of God. It advertised the services of an exterminator who touted himself as the Scourge of Rats, but De Gaulle is said to have felt it was personally aimed at him by a left-wing citizen. Plus he deemed it below his dignity to have this visible from his residence. He tried everything he could, legally, to make Attila move or take down the sign, but long after De Gaulle stepped down both were still there.
﻿﻿
﻿      While still President, De Gaulle decided to do away with Les Halles, the neighborhood Emile Zola wrote of as "The Belly of Paris". It was an anachronistic bottleneck within the city, a seedy leftover of the 12th century, but a neighborhood bubbling with life as of the wee small hours of the morning. I went there with the American Embassy’s Marine Guards to buy fruit and vegetables for their barracks, because none of them spoke French. It was a fascinating place, filled with smells pleasant and unpleasant, littered with green-grocer trimmings and rejects, noisy with the calls and songs of vendors who spoke a French I hadn’t learned in school. Les Halles was alive, amazingly alive, sensually alive. I only went there once... and then it was gone, relocated outside of Paris to Rungis, where I’m sure the vendors are happy to have a roof over their heads through summer storms and winter cold but also where any hint of folklore is totally absent.
But back to the rats. While the green grocers and butchers were plying their respective trades in Les Halles, the rats scavenged around without bothering anyone very much. They scurried about in the shadows, ducking back into their holes with their booty. But when De Gaulle moved Les Halles out of the center of Paris in 1969 and their pickings disappeared, all hell broke loose. Of the ten pavilions built under Emperor Napoleon III as part of the modernization of Paris, all were razed but one (which was moved up-river to Nogent-sur-Marne where it’s still in use... as a cultural center). With their habitat destroyed and all the fruit and vegetables and meat scraps that had been discarded daily over the centuries definitively cleaned up and gone, the dozens of thousands of resident rats grew hungry. Scrounging for new food sources, they invaded the apartment buildings around what was now a gaping hole waiting for a shopping center that was still ten years in the future. City Hall was flooded with angry phone calls. The greatest rat hunt in Parisian history was underway and among the leaders in that man-versus-rat battle was Julien Aurouze, 8 rue des Halles, proud exterminator of vermin since 1872...
... which, interestingly enough, was the year the rats returned to Paris after the Franco-Prussian War. 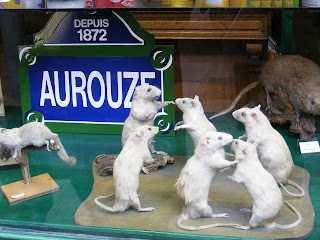 
This is the first in a series about Les Halles, which is undergoing yet another total re-make. The buildings that were eventually built on the site of Baltard’s pavilions have now been torn down and a whole new concept will gradually become the new reality of this old neighborhood.