The Times, They Are a-Changin'

There’s a saying: The more things change, the more they stay the same. But it doesn’t hold true for neighborhoods. Neighborhoods are more apt to say "Gone, but not forgotten".
When I moved to Montmartre in 1970, it wasn’t a rich neighborhood but it wasn’t as dirt poor as when Renoir and Picasso and Juan Gris and other artists had moved in about a century earlier. Montmartre was a blend of young and old, plumbers, electricians, artisans and artists, with some famous movie, theater and music hall stars thrown into the mix. It was a true melting pot. Maybe more so, literally, than the United States.
The changes were gradual at first. Then around the year 2000 the neighborhood was discovered by the bobos - the bourgeois bohème - the Beautiful People, who work so very, very hard not to look rich, right down to the designer rips in their $200 jeans. Real estate values have profited from their invasion, but a lot of the poetry is gone. Piaf wouldn’t recognize Montmartre any more if she came to sing in its streets. And when I took a walk around the other day, I had a hard time remembering what used to be where, so I started taking notes of Then and Now.
Some changes are for the better. At the Place des Abbesses, there was a run-down two-story shoe store that rarely sold any shoes because the man who owned it was so unpleasant - and racist in a mixed-race neighborhood - that no one wanted to deal with him. As he owned not only the business but the building as well, he didn’t need to worry about covering rent, so he just sat inside his shop, glowering behind his display window of out-dated shoes. When he died, his son sold it to the City of Paris, who tore down the Dickensian shop and put up a debatably ugly Space Age neo-classic apartment building that houses in its courtyard the 400-seat Théâtre des Abbesses, which opened in 1996. A sister of the Théâtre de la Ville in the heart of town, and subsidized by the Paris City Hall, it also offers activities open to the public as well as rehearsal rooms for music and dance... an excellent thing in a neighborhood known not only for artists but also for its dancers and musicians.
But most changes have followed another track.
For instance, the veterinarian is now a trendy clothes shop. So is the butcher’s. There are a lot of them in the neighborhood: trendy clothes shops, souvenir or knick-knack shops, banks and real estate agencies. In fact, that’s about all that’s left.
Across from Charles Dullin’s Théâtre de l’Atelier there used to be a dry cleaner; now it’s one of the real estate agencies. On the corner was a bakery, which is now a trendy clothes store. Next to it, going uphill, was a small fish monger shop run by a husband and wife; it, too, is now a trendy clothes store (is there any other kind in the neighborhood?) Across the way, the tiny mom-and-pop hairdresser-and-barbershop has been transformed into a souvenir shop. 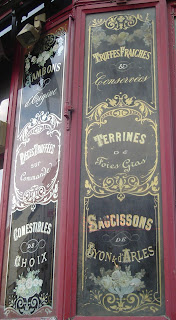 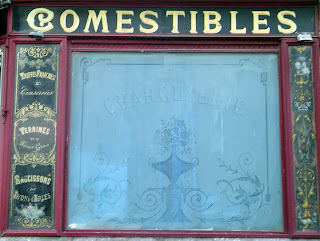 At the five-street intersection was the neighborhood bakery and a florist; now they’re respectively a café and a souvenir shop. There’s still a charcuterie (deli), previously owned by a couple whose children I watched grow up, but instead of touting delicious ready-to-eat dishes, its new owners have emblazoned the shop window with "sandwiches - paninis", aiming at a totally different audience: passing tourists.
Next door, an old friend - the wine shop - is now a pizzeria. That’s one of the changes that hurt the most. I was good friends with both successive owners. The first was an ex-gymnast and that’s why my children ended up doing gymnastics in the public gym down the street (still there! although it, in turn, had once been the local covered market). The second owner had children the same age as mine, and shared my love of sailing. This Caves de Nîmes was a daily stop, even if no wine was bought - just conversation exchanged.
Headed from there back to my old place, the adjacent butcher’s shop is now a rival pizzeria. Next to it, the fur shop that was there when I moved into the neighborhood, replaced by a shop selling wonderful wooden toys and creative games, now sells tchatchkis aimed at not only passing tourists but also the resident bobos. The shop that sold the balls of wool I knit my babies’ sweaters from now sells balls... with little lightbulbs inside to decorate the stylish interiors of the bobos. The sad-eyed widow who ran that shop was the sister of the woman who ran the children’s clothes store across the way with her husband, and whose daughter became a pharmacist and worked in the pharmacie next door. I bought all my children’s "Sunday clothes" there; they were fairly expensive, but they were fashionable and well-made and lasted in such good condition that they were handed down to friends’ sons and daughters. The children’s clothes shop is now a souvenir shop, as is the pharmacie next to it, newly sold out by its Franco-Iranian pharmacist.
Next was a tiny restaurant run by a man nicknamed Mickey (Mouse) and his wife Myriam. It's also now a souvenir shop - like all the other shops on that block. Mickey and Myriam lived over the shop, as did everyone in those days. (The apartment above a premises went with the shop, and that’s where you lived. No need to commute to work, unless you call a flight of stairs a commute.) I knew the three consecutive owners of the restaurant.  The first couple had transformed it from a girdle shop. The second ultimately moved to a larger café back at the five-street intersection (which is still there, but under new and fancier management). During that time, an Australian friend appropriately named Bruce (see Monty Python) went down there to call for a taxi late one night, only to find the owner and his assistant - an ex-circus performer with an eye-patch whom we all knew only as Neunoeil (One-eye) - daintily massaging wine into a laughing woman’s bounteous breasts, which she had drunkenly pulled out and rested on the counter of the bar. Montmartre had a wilder night life then, and it was the only time I ever heard of Bruce being flummoxed.
There were two pastry shops vying for our patronage, and I was friends with both of them. The larger belonged to Monsieur and Madame Prandy, and remained a pastry shop through two successive owners. It now sells perfumes. The smaller one belonged to Monsieur and Madame Bertheau, who retired to their native Loire region. Mr. Bertheau, who had worked since he was 14, sold his shop to provide money to retire on. He sold to a young man "just starting out in the trade" and who promised to keep it as it was, even wheedling out of them the only thing they longed to take with them: an etched glass panel depicting Millet’s L’Angélus, the name of their shop. The young man insisted that, being mounted on the wall, it was a part of the building. Sore at heart, they left it behind. After one month of work on the shop, it re-opened as... a Häagen-Dazs, with Millet’s L’Angélus presiding over it all. The "buyer" had merely been a straw man for the company, who wanted a highly profitable presence right across from Montmartre’s funiculaire. I’ve never set foot in it, and never will, no matter how hot the day, because they broke my friend’s heart and stole what was to be the couple’s pension.
One good change is the shop that once sold organic fruit and vegetables - first by a dishy Québecois with a hippie red beard and then by a nice couple whose pasty complexions and stooped posture were bad advertising for the benefits organic foods could offer. It’s now an appetizing shop specializing in chocolates and macaroons, less good for your health perhaps, but oh so enticing.

Bob Dylan’s The Times They Are a-Changin’ comes to mind. Or Joni Mitchell’s Big Yellow Taxi, whose refrain says "paved Paradise; put up a parking lot". I’m not really a nostalgia freak, but I do prefer when there was more variety in the neighborhood, when you could get anything you needed practically within a block or two of home or find a repairman just downstairs rather than having to call a central service that sends you out The Guy On Duty.
... when you knew the people who owned the mom-and-pop stores and you had a connection to them and their families. It was more of a true neighborhood, and the people just went upstairs when they closed up shop for dinner, instead of driving off into the night.