﻿﻿ WARNING:  This culinary article may make some readers squeamish.
﻿﻿
To be fair, my eating of strange things predated my French Years. I did eat squirrel when I was a child. On several occasions. My father was a hunter, and we ate what he shot: rabbit, pheasant, duck, deer... Don’t ask me why he shot squirrels, but yes, they do have a faint nutty taste.
But squirrels aside, it may all have started in Paris on a tour of Europe with my parents when I was 12. My father devised a three-week swing through six countries and if a tire had blown at any time, our entire schedule would have been wrecked, that’s how tight he had things planned. 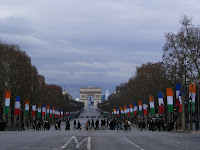 But we did have a few days in Paris. Probably two. We stayed in a tiny pension (kind of a boarding house) off the Champs-Elysées. I don’t remember much, but I remember the Arc de Triomphe and that we had to get there by walking across the star-shaped intersection through whirring cars - no stoplights then and definitely no underpass. But an elderly woman was doing it, so we just walked behind her... and prayed. I remember one day eating at one of the restaurants on the Champs and my father ordered escargots - snails - so I did, too. My mother wrinkled her nose and concentrated on her salad. The escargots were a bit rubbery, but had no taste of their own, really. Just the taste of lovely butter and parsley and garlic, which I have learned is the way God intended them to be eaten.
In the period A.E. (After Europe), there were other things I tried. There were frog’s legs - cuisses de grenouille - which my father received on a fairly regular basis, for medical services rendered (a throwback to the pay-with-a-chicken of yesteryear). They taste surprisingly like snails, consistency aside, because of the butter-garlic-parsley preparation that is the same. And there was tortoise soup, ubiquitous in the 60's but since banned, I think, because tortoises are on the endangered species list. And of course ris de veau, which I never would have eaten if I’d known that it was the thymus gland of some poor calf. It loses in the translation somehow.
And that reminds me of boudin. Which would be blutwurst if you were German.
I had my first close encounter with boudin while on a trip to Brittany with my then-beau Yannick, who was from there. He took me to Beg Léguer, a tiny seacoast town near Lannion where he’d spent his summers as a boy. It was Easter and it wasn’t exactly warm. The campgrounds were closed but there was a light in the snack bar and the lady remembered Yannick, his blue eyes and his lopsided smile. So she agreed to cook us up something. We were the only people there.
"What do you want to eat?" she asked us... and he turned to me.
"Well... something regional?" I questioned.
She immediately said "Ca, c’est le boudin. Aux deux pommes." Translation: That would be boudin with two types of apples (meaning regular apples, sliced and caramelized, and mashed "apples of the earth", aka potatoes).
"Do you want to know what that is?" Yannick asked me, with a note of apprehension in his voice.
"Not if you have to ask. Tell me afterward."
So we ate.
Afterward he told me what it was: blood sausage. My stomach went queasy for a few minutes, but I had to admit it had been tasty, fried all crisp with the melt-in-your-mouth apples and butter-rich mashed potatoes.
Since then, I’ve branched out to boudin créole because my children’s father comes from the French West Indies. Same principle as French boudin, except tied into finger-food size sausages and jazzed up with hot chili peppers. You can get them in New Orleans and elsewhere in Louisiana, which was, after all, part of France until 1803 and remained a port that traded with the entire West Indies.

In the realm of seafood, I’m pretty unbeatable, having been brought up at "the Shore" as people say in New Jersey - the pretty part, far from New York City. So sea urchins (oursins), strange-looking as they may be, are a salty treat. A kind of saltwater caviar, as it were.
I have eaten beef tongue (langue de boeuf), which I’ve only had cut up in a salad. It’s not half bad, but I don’t think I’d go as far as the British, who eat it sliced in sandwiches... with a lot of mustard, I think. And I definitely don’t want to see it lolling about in the butcher’s window. 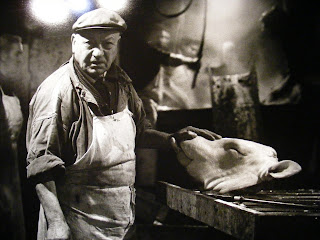 There are still things I wouldn’t touch with a ten-foot (three-meter) pole. Anything that is still recognizable and full of cartilage, such as pig’s trotters (pieds de cochon) - or their ears, for that matter - or calf’s head (tête de veau). And there are only two innards that I will deign to eat: kidneys (rognons), especially in mustard sauce, and calf’s liver (foie de veau), preferably with bacon or at least onions. Even ris de veau makes me hesitate, unless it comes with a slab of foie gras on top, à la Rossini. The rest of them are on my No-Go List, especially tripe, which will always smell of urine, no matter how many times you wash it... at least to me. And brains (cervelle) although I fed them once or twice to my children when they were young because I was told it was... brain food. Heart (coeur) feels terribly tough to the touch, being a muscle, but more importantly I can still imagine it beating and that evokes images of Maya warriors ripping it out of the chest of the vanquished. (Or was that the Aztecs?)
I guess you either have to get used to certain foods when you’re young - before you truly understand what it is you’re eating - or you have to be more intrepid (or more curious) than I am. Still, I feel I’ve come a long way, baby. And I’m fine with the distance covered.