Gone with the wind

As I was working on The Project (see Jan. 22), I ran across several books that I didn’t remember I had. One was called "Les petits métiers des jardins publics" and another called "Des métiers et des hommes au village". They reminded me of yet another book, "Les métiers disparus" (references listed below).
The common thread in these books is jobs that have disappeared. There are plenty of them in the States, such as buggy whip maker. But in France I’m out of my native culture so maybe I notice these things more. 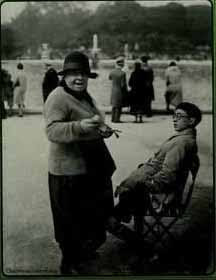 When I came to Paris in 1968, I was a poor student. Which means I spent a lot of time in the Jardin du Luxembourg, the city park close against the Latin Quarter and the Sorbonne. It was a free space near my classes just perfect for hanging out. But the lawns were off-limits and if you tried to walk barefoot on the grass or, God forbid, sit down on it, you would harvest a series of angry blasts from the whistle of the ParkenKommandant. There were comfortable chairs - green-painted iron chairs - you could sit on, but... You would have to hand over 25 centimes (war invalids, no charge) to a little old lady who came around to collect for them. Always little old ladies. They were called "chaisières", which roughly translates to "chair ladies"*. You’d pony up the money and she’d give you a numbered ticket that you could show, if needed, to prove you’d already paid. (Tourists were always baffled at the concept of paying for a chair in a park.)
If you weren’t too absorbed in a) your book, b) your lunch, or c) your boyfriend/girlfriend, you’d see her coming and nonchalantly get up and walk slowly and absent-mindedly in the opposite direction, maybe humming a tune, or saying loudly something like "Zut! J’ai perdu mon...." (Rats! I lost my fill-in-the-blank.), just so she wouldn’t think you were trying to be slick and escape without paying. As if they didn’t know. And then you’d find yourself a bench, which, unlike the chairs, was free. The chaisières were generally sour old bags with a nasty tone and a frown, which didn’t improve your opinion of them much. These women were paid a minimum wage, plus about 10% on the tickets sold. Which is probably why only needy old women would put up with the job of chasing after young students and smelly vagabonds. Only lovers paid her with a smile.
The city of Paris bought the chairs in 1974, so they're free.  These ladies have disappeared now. And we don’t miss them a bit.

But I do miss the vitrier, the window repairman. I only had to use his services once, but was plenty glad to hear him yelling out "Viiiitrieeeeeeeeer" as he ambled up my street, a frame on his back, filled with panes of various sizes. Even oval ones for rarified ox-eye windows. He always seemed so vulnerable to me, such a perfect target for a nasty young boy with a slingshot and a good eye.
You’d call down to him from your window, tell him what floor and await him on your doorstep. Vitriers were usually dressed rough and had some sort of regional, non-Parisian accent, plus a mustache and maybe a few days growth of stubble. They talked little, aside from "Where’s the window?" and set about their work as if they didn’t enjoy being indoors. They cautiously removed the offending pane over a newspaper or rag that they kept for just that purpose, and then either handed the pieces to you for careful disposal or emptied them into a large box on their backpack-frame, probably to be sold for pennies to a scrap man who in turn sold them for a few more pennies to a glass company that melted them down to make new glass. Then the vitrier would measure your window and put in the right size, sometimes after trimming it down with his tools and snapping off the excess. He’d tap in those tiny nails to hold it in place, sculpt in the putty and then ask for his pittance. With a nod and a perfunctory tipping of his cap or beret, he’d be off and you’d soon hear him from your window taking up his song: Vitrier! Viiitrieeeeer! 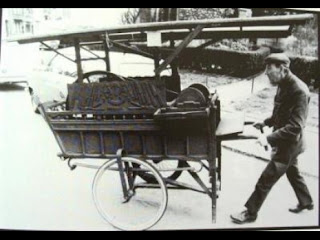 I also miss the knife-sharpener, who walked a lot faster... almost always too fast for me to catch. Back in the day, he must have been slowed up by all the homemakers who rushed downstairs, knives in hand. By the time I reached Montmartre in 1971, such homemakers were few and far between, I guess. As soon as you heard him swinging his bell in the distance, you rushed to gather up your dull knives, scurried down the stairs without impaling yourself and ran through the street after him.
Again, I only managed this once. These aiguisseurs de couteaux didn’t do stairs. Of course they would have had a hard time, what with that huge grindstone-on-a-wheel they pushed down the cobblestoned streets. It made a bzzzzzz-ing sound and children liked to stop and watch the sparks fly, especially on cold days. The aiguisseurs were usually swarthy-looking, but they never yelled anything that would indicate their nationality. Just that swinging of the loud bell and bumping of the grindstone-wheelbarrow.

One nationality you could recognize though was the gypsy who strode down the street accompanied by a young boy - or sometimes girl - rumbling a snare drum. He carried a stepladder over his shoulder, perched a capuchin monkey on his arm and led a llama (with two l’s, please) or a goat on a leash. He would stop at a choice spot - which (lucky for me) was just below my window at the entrance to the park below the Sacré-Coeur - and the snare drum would sound a sharp, final rat-a-tat. He’d set up the stepladder, the young boy-or-girl would start a new drum roll, the llama (or goat) would dutifully climb up the three steps and then balance all four hooves on the top... or if it were feeling particularly inspired, lift one hoof and balance on only three. Whereupon the snare drum would break into a little dance rhythm, the monkey would doff his hat and the llama/goat would jump down with a sigh of relief. Then the child collected money from the crowd and the gypsy gave a morsel to both the llama/goat and the monkey and made a fuss over them, to keep them sweet.
My children loved their act and would clap their little hands from our fifth-floor window. We would take a franc or two and wrap it in newspaper and yell to the child until (s)he looked up. Then we’d throw it out the window to the pavement, where it would be scooped up and handed, with the rest of the booty, to the gypsy, who put it in the red velvet money bag hanging from his waist. After that, the gypsy folded the stepladder, the monkey jumped up on his arm... and they were off, presumably to the next corner. Sometimes you could hear the drum routine two or three times before they disappeared from earshot.
And from the streets of Paris, I guess, because I haven’t seen or heard one in almost two decades.

Nowadays it's other métiers, other trades that are becoming rare. Stationery shops, for instance. There used to be a large one just across from the Abbesses Métro station in my neighborhood. It sold newspapers and magazines, both domestic and international, to us all, along with books, maps, paper, pencils and other office/school materials. Plus it had a Xerox machine that worked full-time... when it wasn’t broken. The gentleman who owned it was in a wheelchair and often surly, but rarely to me, whom he would tease mercilessly, a little quirky smile on one side of his face. On one of my stays here I didn’t see him and presumed he was off on vacation or ill or something. The next trip I still didn’t see him and asked after him. Whereupon I learned that he had died many months earlier, of a heart attack. His daughter lived in Montreal and his son had moved down from the north of France to handle things, but missed his family. After a year, he gave it up and rented the store to a ponsy shop that now sells fancy, expensive teas. We all scramble to find our newspapers and other things elsewhere. Which is getting hard. I guess there’s not enough money in it, plus too much competition from megastores such as Carrefour and Leclerc... and shopkeepers must get tired of inventorying pencils and erasers and boxes of paperclips year in and year out.
This and other such shops are probably the métiers disparus of tomorrow. And Paris will be just a touch sadder without them.

*Evidently chaisières also existed in churches at one time. French churches mostly have chairs, not pews.