Out and About: Exhibits: Doisneau - Paris Les Halles 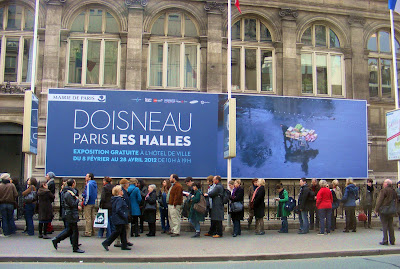 Even people who know little about photography usually recognize two names, both French: Henri Cartier-Bresson and Robert Doisneau.
Doisneau (1912-1994) is best known for his picture everyone calls "The Kiss", Le Baiser de l’Hôtel de Ville. But at one point his interest was in the sociological aspect of photography and he is known for helping establish photojournalism. This is very obvious in his photos of the neighborhood called Les Halles, "The Belly of Paris" as Zola called it. He took his first photo there in 1933 and came back time and again over a 40-year period.
When the decision was made to move Les Halles to Rungis, a suburb between Paris proper and Orly Airport, and to raze the Baltard pavilions, Doisneau sensed that this was the end of an era. He took it upon himself to record it all on film, going out once a week. "I had to get up at 3 in the morning, in Montrouge [a suburb bordering on Paris to the south], to get over there in time to catch the workers who started at dawn, the guys who unloaded the trucks, the guys who set up the stalls. Hard shooting conditions: poor lighting, reflexes slowed by fatigue, so many images to choose from! And it was intimidating. But I stuck it out. I knew that it was all going to disappear. I absolutely had to capture it for the future."
This exhibition shows all the aspects of the world Doisneau captured: the workers, the poor people who culled through the garbage left behind, the old buildings torn down, and even the new installations at Rungis. 208 photographs in all, mostly black-and-white. It’s aimed at people old enough to remember what it represented, what it smelled and sounded like, as well as those who never knew the graceful Baltard pavilions or Le Trou Des Halles, the gigantic hole dug for the new shopping center and then left abandoned for what seemed like years. In the words of the curator, "the exhibit shows the life, the color and the character of the neighborhood from the Thirties to the Seventies". 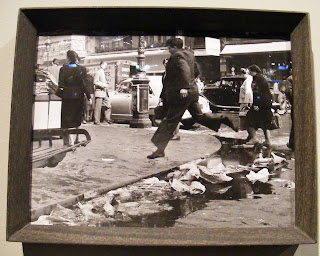 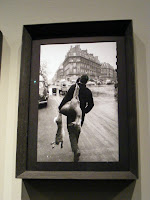 ﻿ ﻿ P.S.  During this exhibit, photographs by Doisneau have also been put up in both Hôtel de Ville Métro stations (Lines 8 & 11).

P.P.S.  Paris Mayor Bertrand Delanoë has made it a point of honor to open up City Hall to the people. All the exhibits hosted there are free, because it’s the People’s House. And the mayor has even stepped up the rhythm, with two exhibits running simultaneously right now in two different sections of the main floor: this one on Doisneau and another one on cartoonist Sempé (see blog, Feb. 4) running until the end of March. Both have long lines, but both are well worth the wait. 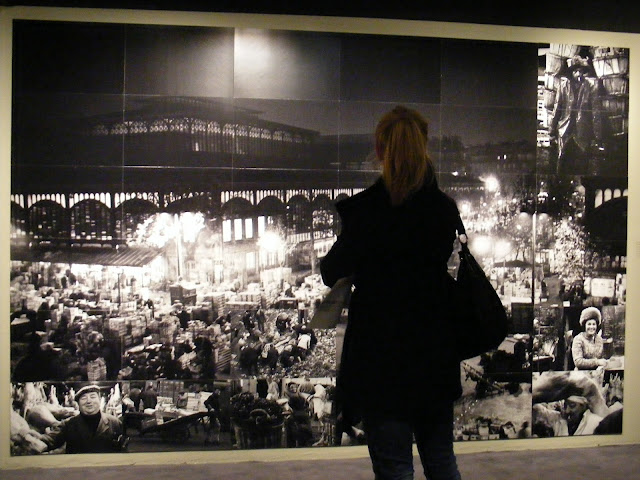