Paris is built on a river.  But most of you know that.  Maybe you've even taken a bâteau-mouche cruise along the banks of Seine.
If you have, you will have seen this statue.  It’s a survivor from a previous bridge, one which proved too narrow for modern traffic and also was starting to sink a bit, which can’t be good if you’re a bridge.  (The French use the word “tassement”, which is what people do when they grow older... and subsequently shorter.)  So from 1970 to 1974 the old bridge was taken down and a new one put up.
There’s one major difference between the two bridges though.  The old classic one had two piers, and there was a statue on both sides of both piers, for a total of four.   The new resolutely modern bridge has only one pier (on the Right Bank) and so it was decided not to put the statues back up.
Except for the zouave.  Because the people of Paris, and the Port Authorities as well, use him to measure the height of the Seine.  When the zouave soaks his weary feet in the water, the Seine is officially in flood status and the expressways along the river are closed to traffic*.  That happens several times a year, especially in the spring when April showers bring May flowers and snow in the mountains far upstream melts.  When the water gets up to the zouave’s thighs, the river is no longer navigable because boats can’t pass under the bridges of Paris.
Working backwards, in the winter of 1999-2000, the Seine came up to the brave old soldier’s knees.  In 1982, it came up to his... er... family jewels (otherwise known as Big Jacques and the Twins).  In 1955 up to his waist, and even a bit higher back in 1924.  But the apotheosis was in 1910, when it came up to his shoulders... and spilled over the banks, covering most of central Paris.  Twenty thousand buildings were flooded and half of the subway system lay underwater.  Plus this disaster struck on January 28th, so the water was ice cold.  And to add insult to injury, the sewer system backed up and epidemics of typhoid and scarlet fever broke out.  It took until mid-March for the flooding to be entirely gone.
Add to this the fact that when the new Alma bridge was built and the statue put back in place in 1974, the zouave was mounted higher up than before, so even more attention is now paid when parts of him disappear underwater.

But what is a zouave?  It’s the term for a French soldier from the North African infantry, one of France’s most decorated regiments.  These troops fought especially valiantly in the Crimean War, and specifically at the Battle of the Alma River near Sebastopol in 1854, which is the year this bridge was built.  The zouave depicted on the bridge in Paris is wearing the traditional uniform:  a fez, a wide sash, waistcoat and jacket, and the especially distinctive “puffy pants”.   He stands with left hand sassily on hip and the other holding his rifle at the ready.  A tall man of 5.2 m (17 ft), he’s a bit hefty, weighing in at 8 tonnes (17,637 lbs). 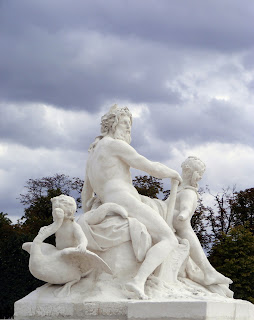 Right now the zouave’s feet must be aching because he’s soaking them.  And it continues to rain daily over Paris and snow is falling upstream.  So there’s little chance of the river level dropping any time in the foreseeable future.  While 1910-like flooding will probably never be seen again, largely thanks to retention dams upstream, traffic within Paris has become problematic at best, with the riverside expressways closed.  And the captains of tourist cruise boats are holding their breath, as are the captains of all those barges that carry goods back and forth under the bridges of Paris.  Their swear words may soon be joining those of frustrated motorists.
Meanwhile, the zouave with the wet feet just stares off into the distance, listening for cannon fire. 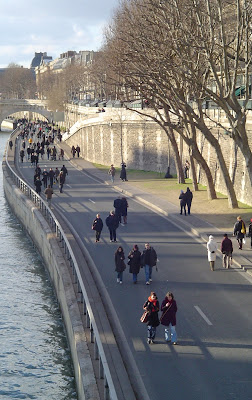 *The present mayor of Paris, Bertrand Delanoë, has made great changes in these expressways.  For many years now, they’ve been closed to traffic every Sunday from 9 am to 5 pm so that people can take romantic walks along the riverside.  (They still have to keep a careful eye out though for speeding rollerbladers or bikers in training.)  In addition, sections on both banks have been reconfigured to cater less to cars and more to the bipeds of Paris.  One section has already been implemented on the Right Bank, from City Hall to past the Ile St. Louis.  Another is slated to open in the spring of this year, running from the Orsay Museum almost to the Eiffel Tower on the Left Bank.  This is the same mayor who brought the Vélib low-cost rental bike system to Paris and has created more and more dedicated bus lanes at the expense of car lanes, so he is already hated by motorists.  He obviously believes the French capital should be pedestrian-friendly.