Who Are the People in Your Neighborhood: Caves des Abbesses 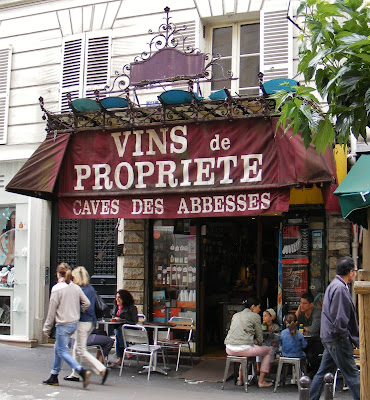 Cities are living things.  Even a city as historically protected as Paris.
Neighborhoods change.  They lie dormant a while, living their humdrum neighborhood lives.  And then one day they’re rehabilitated and transformed by new construction.  Or else they’re “discovered”.  And yuppified.
As living things go, Montmartre has led several lives.  Initially, it was a small rural hamlet nestled on top of a craggy hill far to the north of Paris (given the transportation of the times).  Then it was a pre-industrial village, with dozens of windmills that ground into flour the wheat grown by farmers on the plains below, or sawed planks and crushed gypsum to build the blossoming capital that was expanding ever closer.  As the 1800s became the 20th century, its squalid but cheap housing attracted penniless painters and poets and it became an artist’s colony.  By the time I moved there in 1970, it had settled into being a blend of all of the above, except that neither of the two remaining windmills still crushed, sawed or ground. Plumbers and electricians, actors and artists lived side by side with the rest of us in a little microcosm of Life, all of us frequenting the same rosary of cafés and shops that stretched along the rue des Abbesses.
And then Montmartre was discovered by the Beautiful People.

But before that hurricane hit, a certain André Bourdin bought a shop on that street back in 1986, to add to the other one he already had in the suburbs.  Bourdin was the grandson of a wine-grower in the Loire Valley, and so that’s what he chose to sell:  wine.
Time passed, the shop flourished and Bourdin Senior retired.  The management of the enterprise (now totaling three shops) was handed over to son Emmanuel - or Manu, as he’s known to those of us who have seen his face achieve its first wrinkles over the years.  And those hands have proven extremely competent, even though they were formally trained as a pastry chef before he moved on from dessert to beverages.
Manu has added modern touches, such as a website where you can follow events held by the shop - mainly tastings but also an occasional raclette party or a wine trivia quiz - and check out featured items and end-of-rack sales.  Physically, he’s changed little in the shop, except for the ceiling.  If it ain’t broke, don’t fix it.  And it’s definitely not broke.  Business is brisk and smiles are always on hand, on the faces of customers and staff alike. 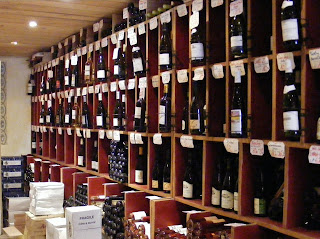 One thing Manu has changed is the wine selection.  He’s tweaked it to follow the changes in both clientele and tastes.  “Wine has become something more cultural, a social occasion, rather than just having a drink,” he explained when I asked him about those changes.  “We carry a broad selection of wines that offer good quality for the low prices we practice.”  That selection includes 300+ different wines, ranging from 2.90€ for a simple table wine all the way up to (hold on to your hats) 1,100€ for a Lafite-Rothschild! 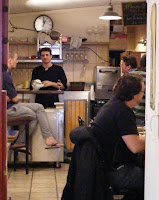 There’s also a back room to the wine shop.  Once upon a time it was an actual forge that made metal objects.  Which just demonstrates what Montmartre was not so very long ago and how it’s changed.
A few years after the store opened, and before the yuppy invasion, Michel Desroches, a sommelier also from the Loire Valley, appeared and helped turn that forge into a tiny wine bar where The Usual Suspects could taste a selection of the wines sold in the front of the house and have something to nibble on to absorb it all.  Michel has moved on, but his creation is still going strong.  The tiny room is crowded and noisy during peak hours so I try to get there early.  When the shop closes and the front door is locked, the wine bar is still rollicking and customers leave after last call (10:30), through a side door.  Often singing. 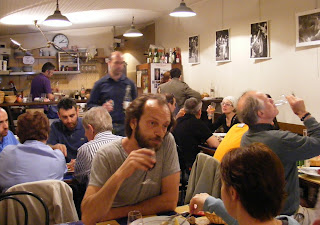 When I ask Manu what’s special about his wine bar, he says “It’s kind of hidden away... and we have a good mix of people.”  Which is true. The Old Guard welcomes the Young Invaders and they all end up talking together, discussing politics, soccer... or else the newcomers never come back, which is just fine with everyone.  It’s a real cross-section of society... and that’s a hard thing to find in today’s Montmartre.
When I go with friends, we order the assiettes.  There are five different sliced meats platters to choose from, another four with various assortments of cheeses and one with a variety of marinated antipasti:   tomatoes, artichokes, eggplant and zucchini.  If there are several of you, order one of each.  Together they make quite a meal.   And the list of wine by the glass (or bottle) includes 7 whites, 1 rosé and 13 reds.  Room for dessert?  How about a moelleux au chocolat (a lava cake, chocolate of course), obviously washed down with a glass of champagne. 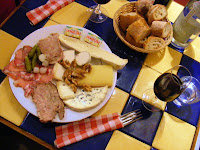 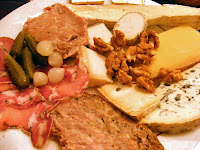 The sign over the front door announcing the half century of bons et loyaux services (dedicated service) of the very first shop in this family chain has just come down but the spirit is always festive in this most-genuine-remnant-of-the-old-Montmartre.  Genuine to the tips of its fingernails - authentique jusqu’au bout des ongles.  The Caves des Abbesses is the real deal.  So even if you’re only passing through the neighborhood, and even if you’re “just” a tourist, try to drop by when the wine bar is open.  You won’t regret it. 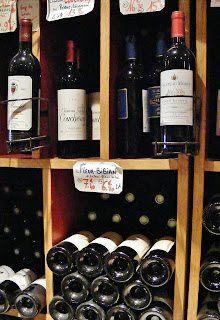 P.S.  If you buy too many bottles to carry home, they deliver on Saturdays.  That’s definitely a plus if you live uphill.