With rings on her fingers and bells on her toes 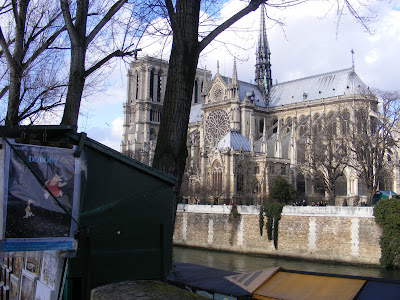 Notre-Dame de Paris is having a birthday.  The venerable lady is 850 years old.
I can’t tell you her exact birthday because we don’t know when to count from.  There aren’t any records that say what day construction began. So we have to work from the year.
The first stone was laid sometime in 1163.  And work continued until 1345.  That’s a lot of years.  A lot of years, ten French kings and 18 bishops of Paris!  Pretty impressive.
Which is what Our Lady of Paris is.  Impressive. 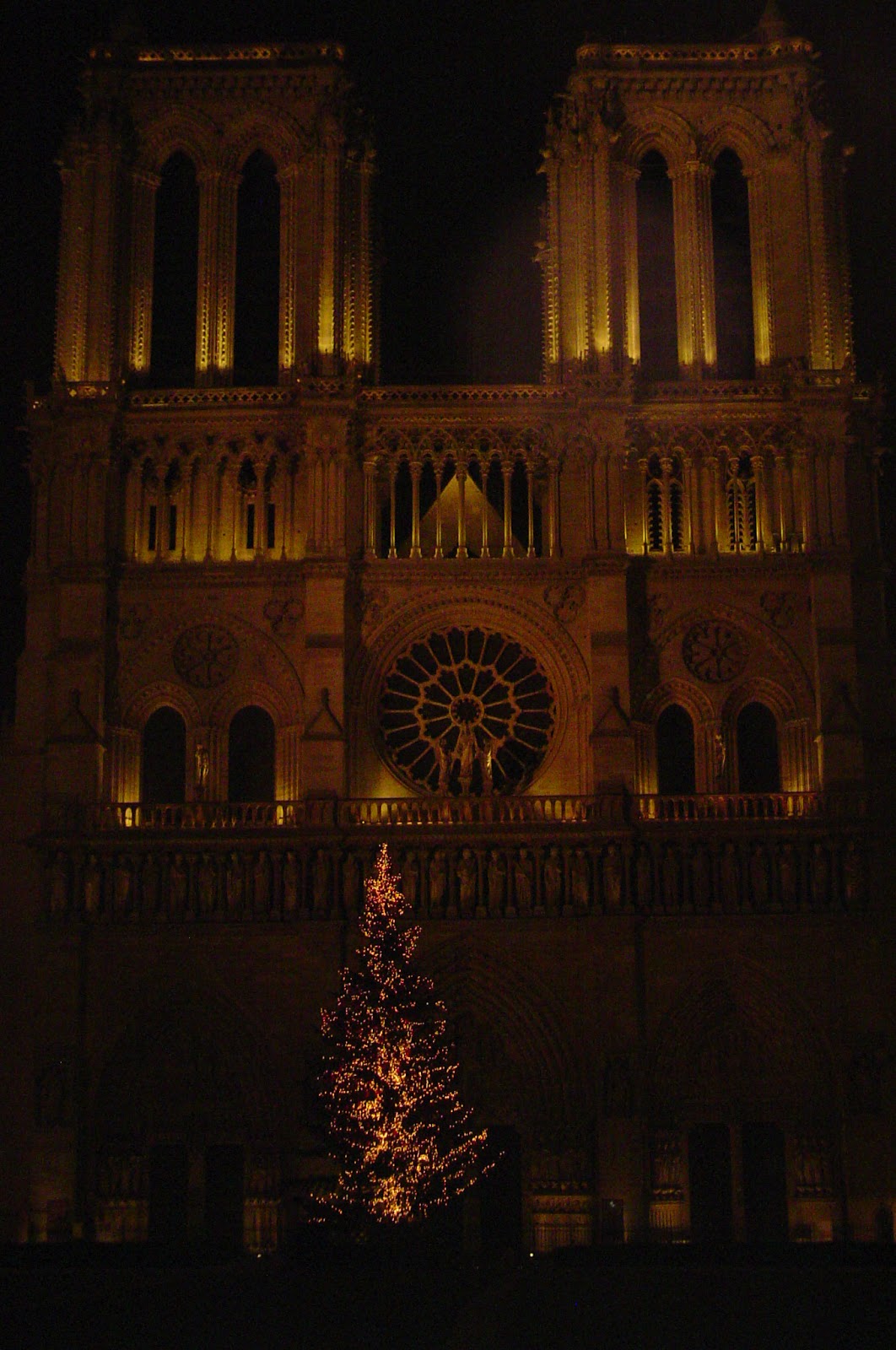 Notre-Dame is almost the first Gothic cathedral in France.  It has survived through many troubled times.  That should deserve some respect.  And yet... 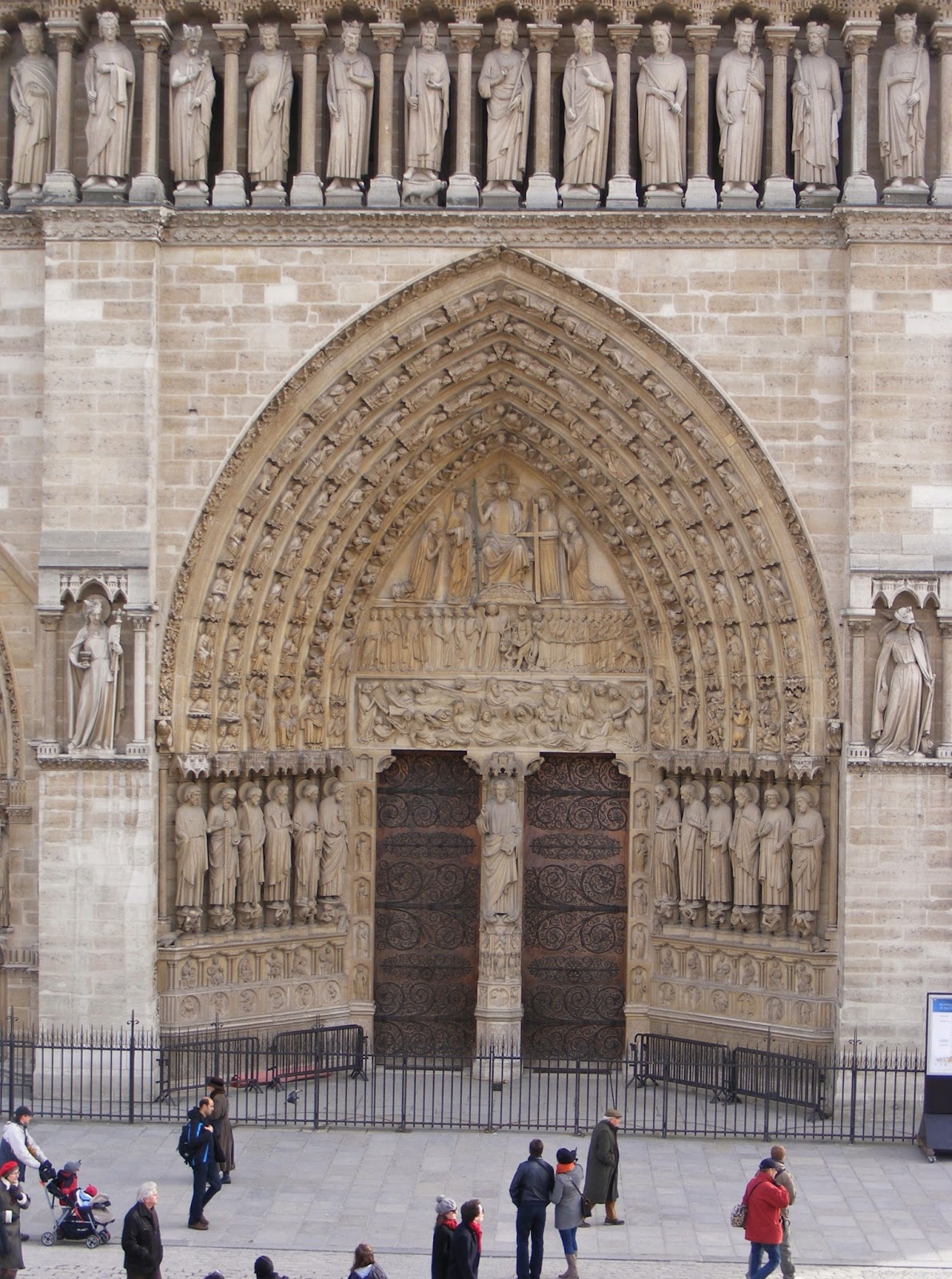 During the Revolution, citizens thirsting for the blood of the monarchy swarmed over the facade, crying “No more kings”, and decapitated every single statue.  They didn’t realize what Kings of Judah actually meant... and I doubt they cared.
Fifty years later, the neglected cathedral was crumbling away, with pieces falling from its towers into the streets below.  It was slated for demolition.  But Victor Hugo took pity on it and in 1831 wrote The Hunchback of Notre-Dame, dedicating all the money he made - and probably more - to its restoration, which took 23 years (including replacing the severed heads).  That novel, and the zeal of Hugo, saved the cathedral.  Without him, without Quasimodo and Esmeralda, Notre-Dame would be gone.
Yet shortly after that, all of Hugo’s efforts almost went up in smoke.  Once again, frenzied citizens of the poorest sort took to the streets, declaring the Commune of 1871.  As they were being beaten back by government troops, they set fire to the Louvre, Palais-Royal, City Hall, and many other buildings.  Notre-Dame was on the list but escaped. 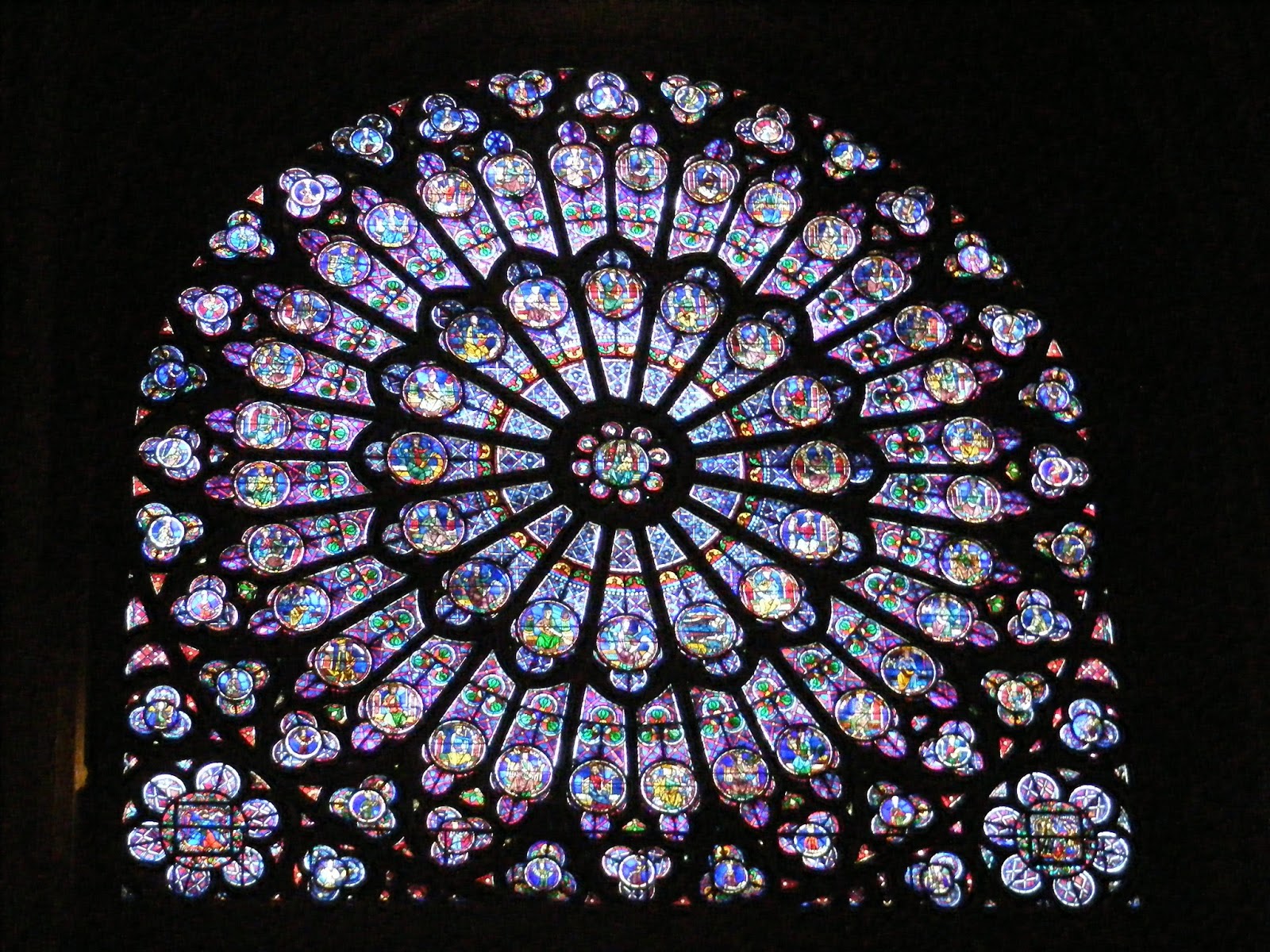 Then in 1944, faced with the advancing Allied troops, Hitler decreed that Notre-Dame -  along with all the bridges of Paris and most of its monuments - should be blown up as the Nazis fled the city.  Bundles of dynamite were set in place.  “Is Paris burning?” Hitler screamed over the phone to the retreating Commandant of the city, General von Choltitz..  Luckily, von Choltitz ignored Hitler’s orders, seeing his salvation in preserving the capital (and thereby maybe his own life as well).  Again, Notre-Dame was saved.  (see Diplomatie blog, Oct 21, 2011 for this story in play form) 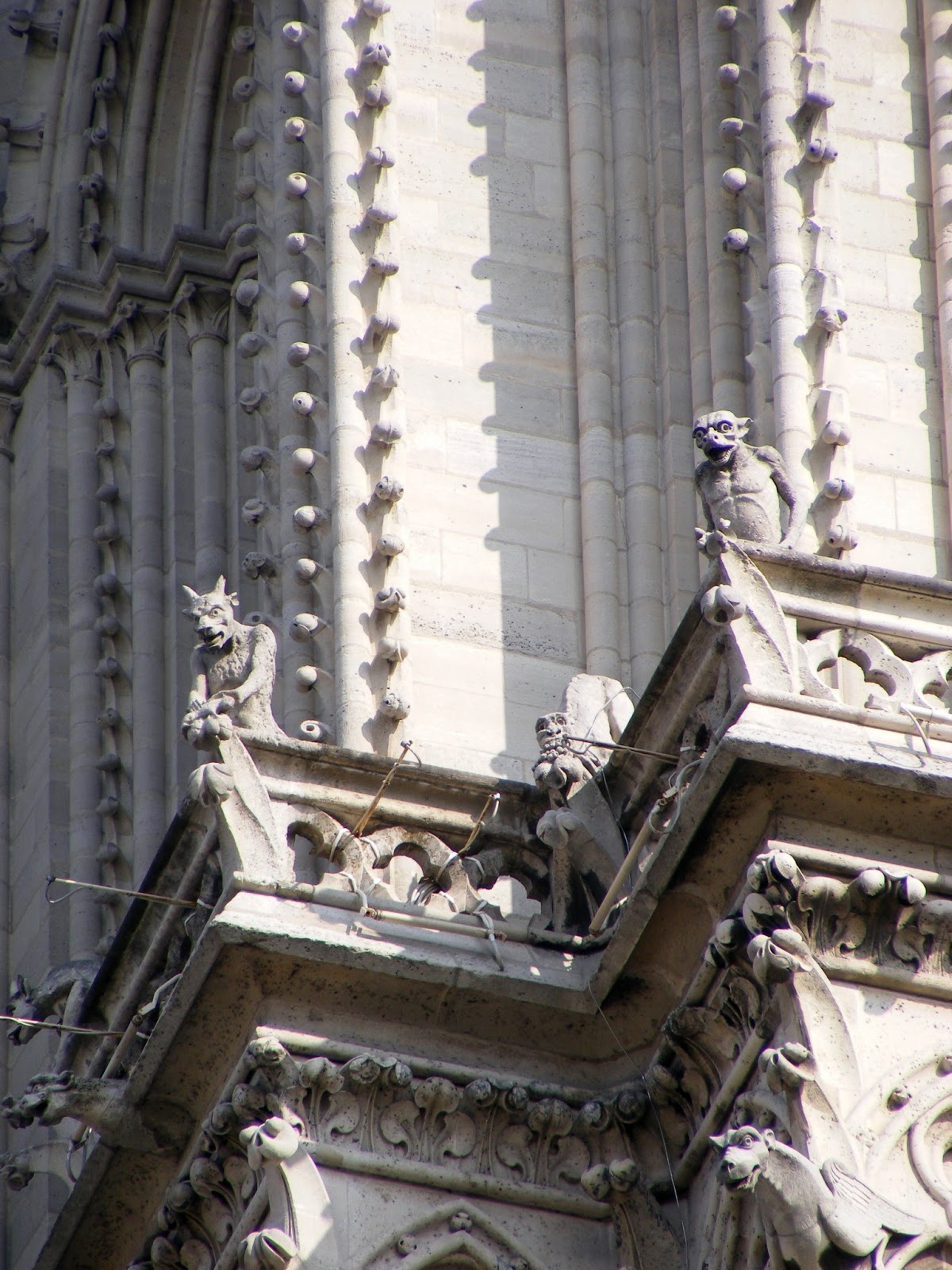 With the advent of the motor car came a different kind of danger:  exhaust fumes.  When I visited Paris with my parents in 1958, the cathedral was filthy black, as were all the monuments.  And it was still black when I moved here ten years later.  Then André Malraux, noted author and Minister of Culture at that time, decided to wash away the centuries.  Sandblasting immediately proved destructive to the statues, so the job was finished with soap and brushes, sometimes even toothbrushes to clean the minutiae.
Yet today, in spite of all those close calls, Notre-Dame is having an 850th birthday.

So what do you buy the cathedral that has everything?
Well, how about some new bronze bells?
Remember the scene in The Hunchback when Anthony Quinn, in the title role, jumps onto the big bell - the bourdon (bumblebee) - and rocks back and forth until it starts ringing louder and louder?  I’ve been up in those towers several times, luckily never on the hour.  It’s loud enough when you hear the ringing from ground level!  Quinn’s bourdon, whose name is Emmanuel, weighs in at almost 13 metric tonnes (28,000 pounds) and was cast in 1685, when it replaced Jacqueline, cast in 1400.  These bells live long lives.
Emmanuel was taken down from the South Tower during the Revolution, but Bonaparte had it hung back up a few years later.  The other bells, all hanging in the North Tower, were removed and melted down, some say to make cannons.  In 1856, Emperor Napoleon III had four new bells hung in their place, but they were of inferior quality and gradually went out of tune.  Of course, they had rung every 15 minutes without fail since then... as well as ringing loud and long to celebrate the end of World War I and the liberation of Paris in 1944.  Most recently, in an act of transatlantic empathy, they chimed in honor of the victims of 9/11.  After a long career, they were finally taken down in February of 2012 and the skies of Paris have been abnormally quiet ever since.  Like the bells before them, they’ll be melted down, but hopefully not for cannons this time.
Emmanuel rings out a pure F#, and its new neighbors have been tuned to that note.  A new, smaller bourdon will share the South Tower with Emmanuel.  Its name is Marie, which was the name of the cathedral’s very first bourdon in 1378.  Marie was cast by the Royal Eijsbouts foundry in Holland and then shipped to Normandy to join the others.
The eight new French-made bells were cast by Cornille-Havard in Villedieu-les-Poêles, a foundry in Normandy which has existed since the end of the Middle Ages.  This is a town I know well because it’s on the road to Mont Saint Michel.  It owes its name (which vaguely translates to The City of God’s Frying Pans) to two things.  The first part, Villedieu, is the name of the land granted in the 12th century by Henry I, King of England and Duke of Normandy, to the religious order called the Knights Hospitaller, who later became the Knights of Malta.  The second part - les Poêles (frying pans) - refers to the business of the town:  coppersmithing.  Advanced coppersmith technology was probably imported from the Middle East by those Crusader monks.  By the early 14th  century, the Corporation of the Coppersmiths of Villedieu had been officially recognized by the Kings of France and ever since the town has been known for its mastery in everything from pots and pans to... well, to church bells. 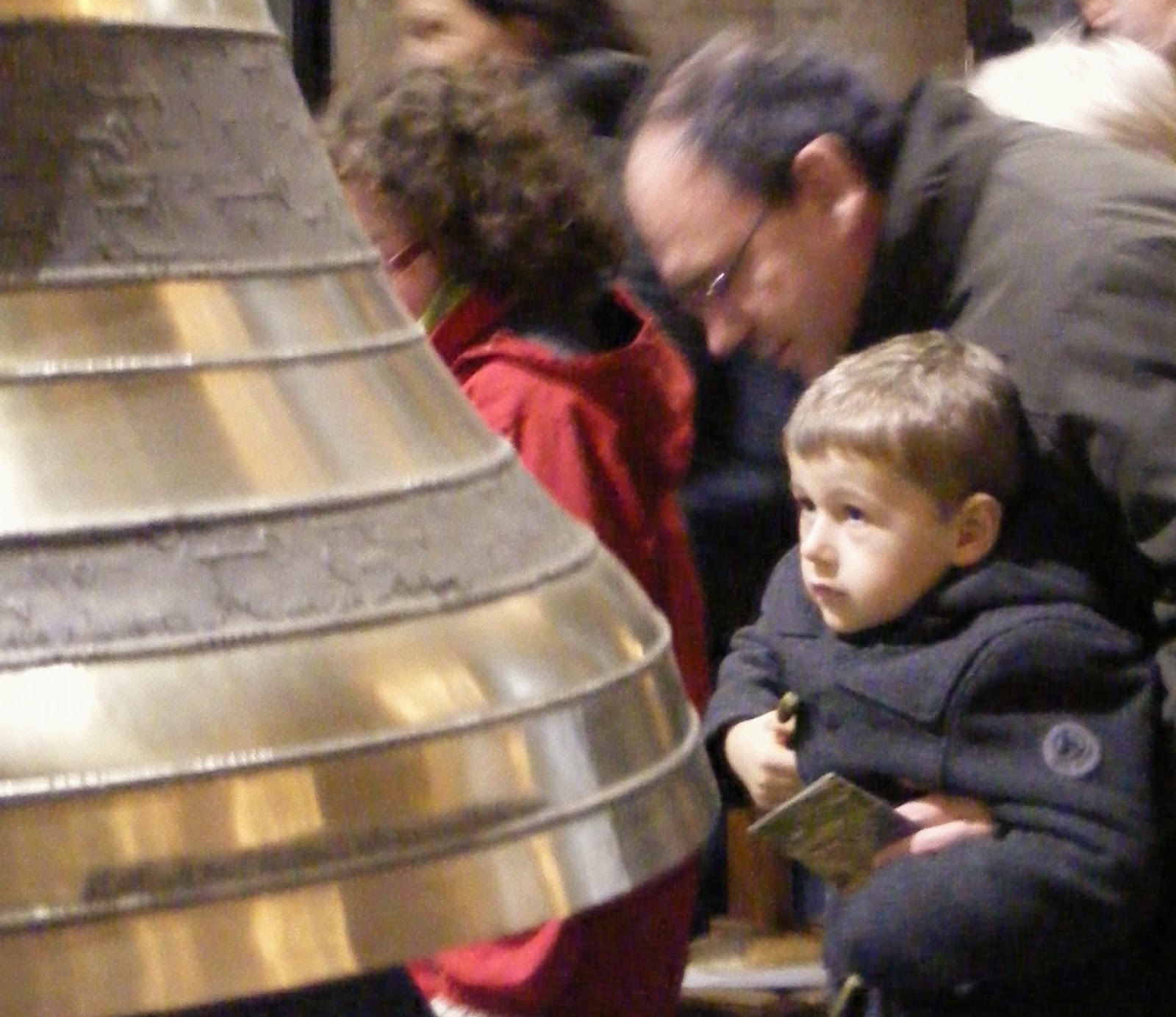 (Interesting factoid:  The town’s inhabitants are called Sourdins, from the French word sourd meaning deaf, because most of the people employed in the manufacturing of copper pans -  which involves repeated hammering - became deaf.)
All together, the nine new bells weigh 23 tons.  And their total cost came to 2 million euros ($2.7 M), all in donations.  The completed project is a return to the original design:  eight bells in the North Tower and two bourdons in the South, with Emmanuel as the base note for their tuning. 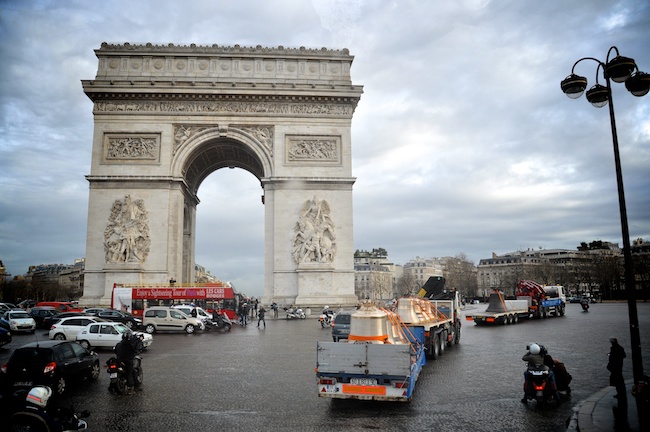 On the last day of January, with a crowd looking on and cheering, the head of the foundry in Normandy rang the bells and they were blessed.  Then all nine new bells left Villedieu on a convoy of trucks that would travel to Paris at a speed not to exceed 50 mph (80 km/hr) under any circumstances.  Two days later, they rolled majestically down the Champs-Elysées and along the Seine River to Notre-Dame, their new home.  After being blessed again on Candlemas, in thanks for a safe journey, they now stand proudly inside the Cathedral and will be hung in the towers on February 25th, the day I fly out of Paris unfortunately because I'd love to see that!
When they ring out for the first time on Palm Sunday, all nine in tune, the silent skies of Paris will become raucously happy.  And I’m sure Quasimodo will be smiling as well, wherever he is. 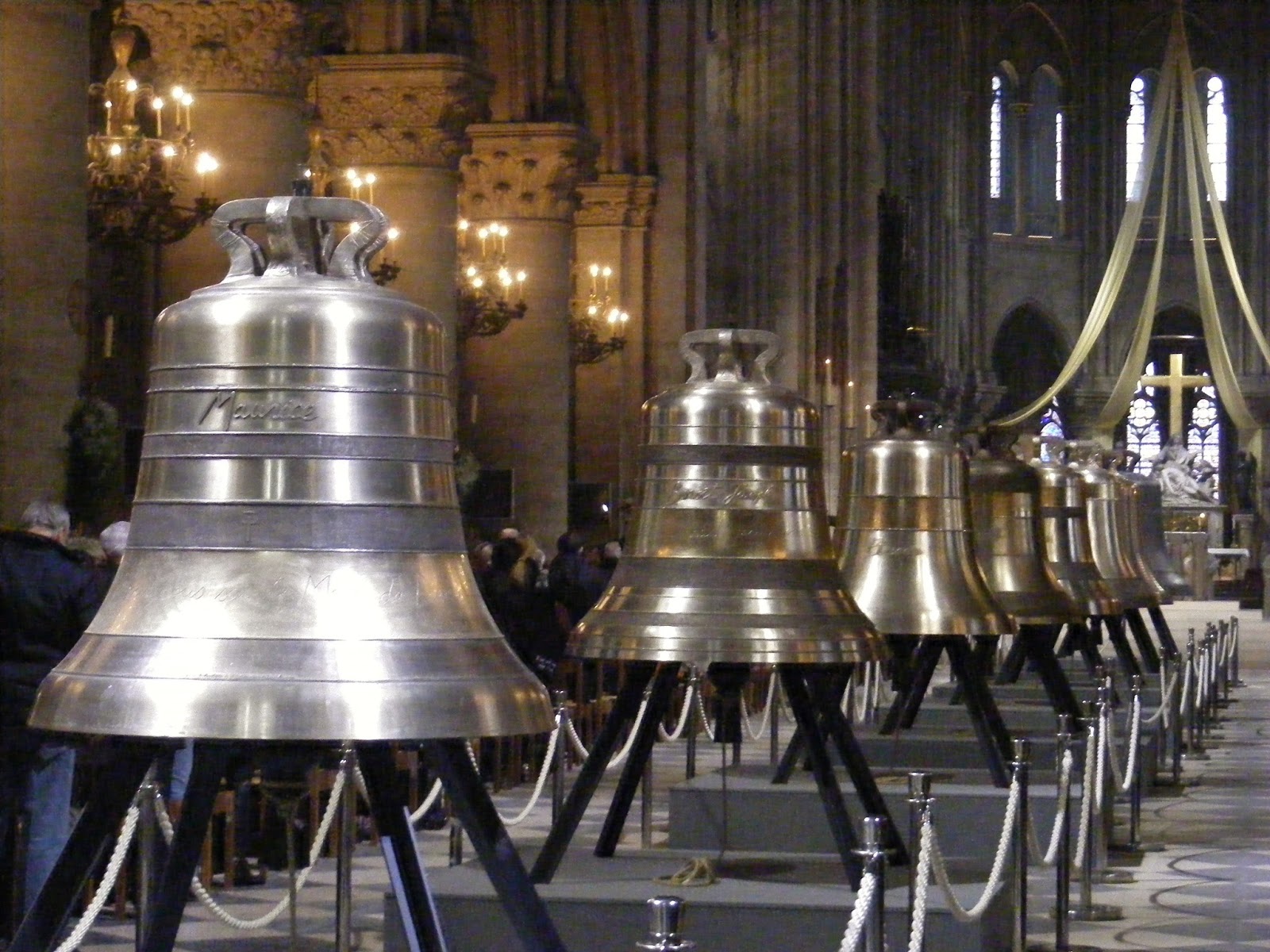 To see and hear the bells:
The bell you hear as of Minute 3 or so is Emmanuel welcoming his new family.
What you hear after Minute 12 is a reconstitution of what the bells sounded like at the end of the 17th century and what they will sound like again as of Palm Sunday 2013.

If you’re interested in the names of the other eight bells, here they are (from largest to smallest): 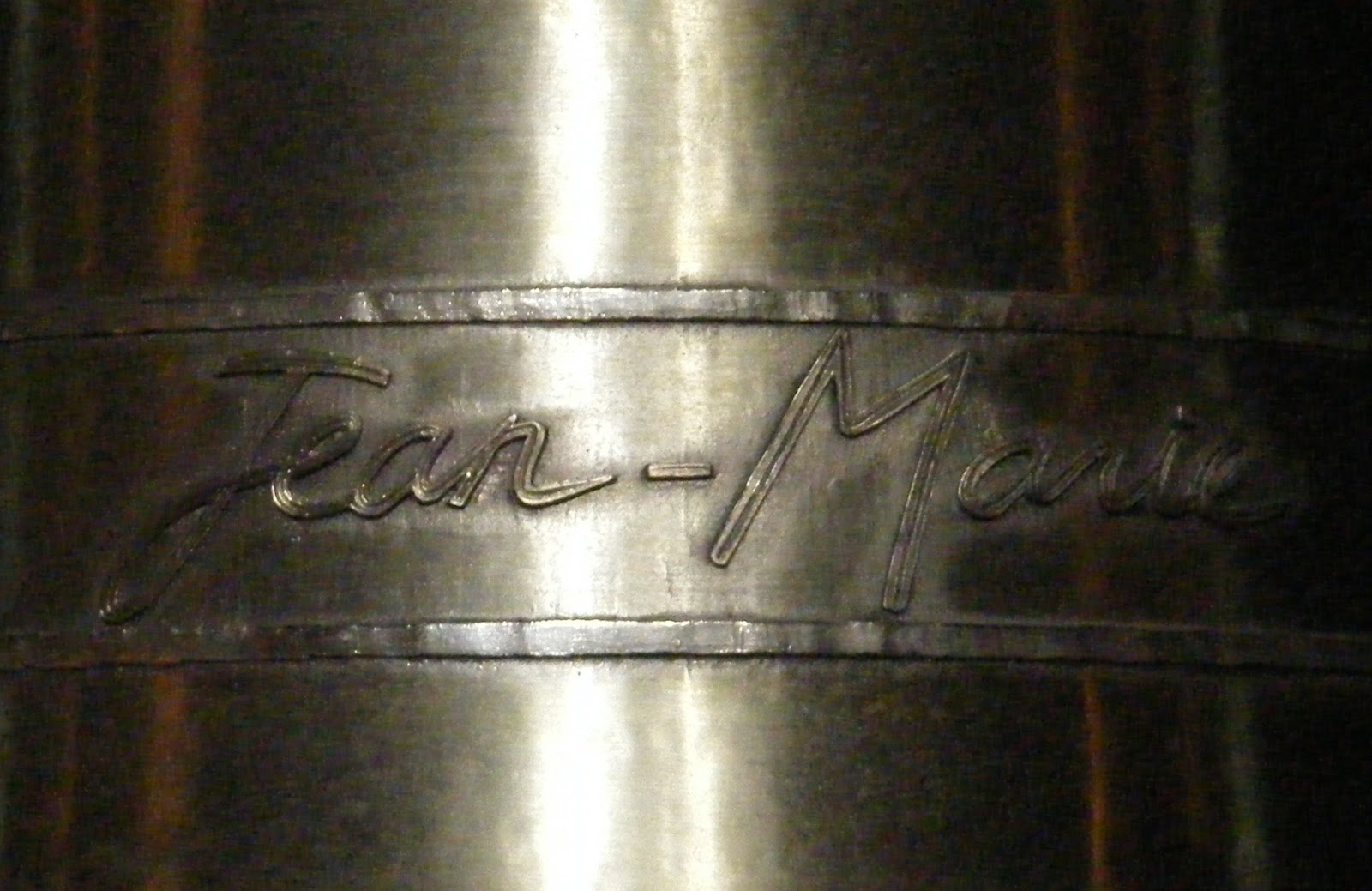 N.B.  In a spirit of full disclosure, all the photos are mine except for the one of Emmanuel in his tower and the one of the bells arriving in Paris, near the Arc de Triomphe. 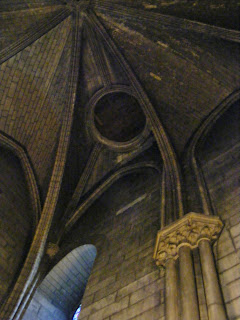 UPDATE:  I dropped by Notre-Dame on my way to Shakespeare & Co. this morning.  In spite of the attack by the bare-breasted women protesting with "Game Over, Pope" and other things written across their torsos, the bells are still there.  And even more accessible than when I did this article.
Curious about how they're going to be raised into the towers, and being in the plane headed State-side when the hoisting is scheduled, I asked the Cathedral's staff.  It turns out they will be lifted up by pulleys from inside the church and through a round trapdoor that you can see in the photo I took this morning.  This is for the 8 smaller bells; there's a bigger trap underneath the South Tower for the bourdon, which will require even more horsepower.  I so wish I could see this, but hopefully it'll be in internet.