Out and About: Events: Playtime in Paris


There are 190 plays currently running in Paris.
That’s enough to discourage the weak in heart from even starting to thin out the herd.  But if you’re a real fan of stage productions, you’re made of sterner stuff.  So I put on my thinking cap and selected a few.  And saw a few more through serendipity. 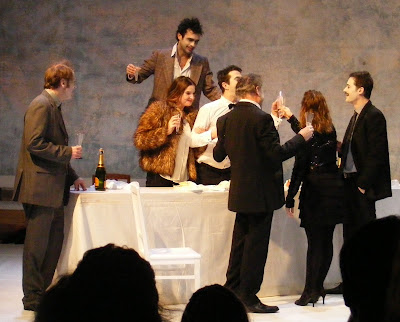 First was Ionesco Suite at the Montmartre annex of the Théâtre de la Ville (de Paris), just down the street from me.  That was one bit of serendipity, because when that troupe brought Ionesco’s Rhinocéros to Ann Arbor, in French, I interpreted for the workshops they held at University of Michigan.  In return, they invited me to see this other Ionesco production of theirs when I returned to Paris.  The actors were largely the same, but this “play” is actually a mélange of five Ionesco works:  Jack or the Submission, Frenzy for Two, The Bald Soprano, Exercices de conversation et de diction, and The Lesson.  The troupe has been together for almost a decade, and they’ve studied all of Ionesco.  One day director Emmanuel Demarcy-Mota handed out ten of the playwright’s texts and told them to choose one that spoke to them and work on it.  Then those texts were structured and woven together to turn the spotlight on explosive social situations such as weddings, family reunions, and birthdays.  All this with minimal sets, multiple costumes, heavy make-up and a stage as close to theater-in-the-round as possible.  The result is hilariously absurd... which is something Ionesco would approve of. 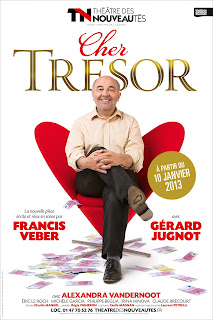 Then another piece of serendipity:  former neighbors from my old Montmartre apartment building turned up on my doorstep and invited me to dinner and a play.  The dinner was at Brasserie Flo and the play was a bit of light fluff:  Cher Trésor at the Théâtre des Nouveautés, in which veteran comic playwright Francis Véber, the Neil Simon of France, takes aim at the tax man.  (It’s a subject prominent in French headlines right now as film and music stars flee to Belgium, Switzerland or Russia.)  The title means “Dear Treasure”, as in Treasury, as in IRS.  The hero, played by Gérard Jugnot, is a faceless loser who hasn’t had a job in years.  He’s living at his godfather’s ritzy apartment and taking care of it in his benefactor’s absence.  One day a tax auditor shows up looking for the owner and Jugnot (as François Pignon, the sad-sack character from Le Dîner des Cons - “The Dinner Game” in English) gets a bright idea.  If he has a tax audit, people will think he has money and stop taking him for granted, women will desire him and he’ll be offered a job.  At least that’s the plan.  So he agrees to rat out his godfather in exchange for a pretend audit.  And then it all goes to hell in a handbasket.  The script is not only full of twists and turns, but manages to stick uncomfortably close to how internal revenue services think.  Like I said, fluff, but well-written, ably-acted fluff. 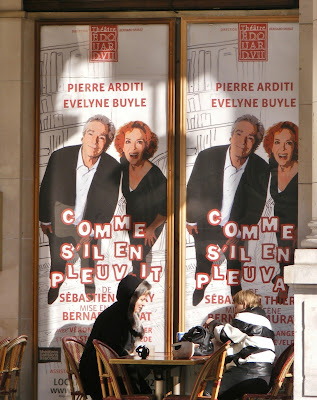 As the weather finally stopped being hostile and my stay in Paris was running out of time, I decided to take the bull by the horns and just show up at the theater to see if Comme s’il en pleuvait (It’s Raining Money) was indeed really sold out.  With big-name stage and screen actors Pierre Arditi in the lead role of Bruno and Evelyne Buyle as his wife Laurence, tickets are scarce.  But the French have something called strapontins, which are those folding seats you see on the Métro, but redesigned for a theater - here the prestigious Théâtre Edouard VII near the Opéra.  Once you sit down, it’s quite comfortable, provided you don’t stand up and let it snap back into folded position, much like a switchblade.  The play’s plot is an interesting one:  money starts to appear in the apartment and Bruno and Laurence don’t know where it’s coming from or what to do about it.  First only a 100-euro note, then 1420 euros... then too much to count.  As Bruno and Laurence are Socialists of the gauche caviar variety (caviar Leftists), this poses certain existential problems.  How they deal with those problems is the crux of the plot, focused tightly on them; there are only two other minor actors and just one set design (with excellent sight lines, I might add).  Thanks to the bumbling, stammering character Arditi has perfected over the years, laughs are loud and frequent, but Véber seems to lose his way after making his point and the ending isn’t nearly as strong as the beginning and middle, although it is totally unexpected. 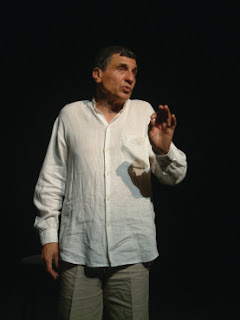 My final bit of serendipity was on an entirely different level:  an invitation to Nous n’irons pas ce soir au paradis (We Won’t Be Going to Paradise Tonight) at the Théâtre de la Ville.  This is a one-man show by Serge Maggiani, who starred in that traveling version of Rhinocéros I mentioned above.  Serge skillfully presents Dante’s Divine Comedy in an hour-long show.  His presentation falls somewhere between the griot perpetuating the culture-that-went-before and the college professor explaining the art of writing.  Into all that, Maggiani tosses splashes of his own muted humor aimed at the absence of scenery and the need for imagination, speaking to the spectators in the familiar tu form reserved for friends in France.  He sets the aura of Dante’s era with a phrase that struck me as very perceptive:  En ce temps, le monde était le monde que Dieu rêvait (In those days, the world was the world as God dreamt it).  Then, as both actor and author, Maggiani takes what he has picked as the “important bits” and personifies them, comments on them, examines them as if he were turning them over and over in his hands.  Ultimately, he presents Dante as an adventurer, an inventor and a messenger.  By the end of the performance, Serge had so well communicated the gist of what he feels is a seminal part of Dante’s Comedy that we could follow along as he recited an entire passage... in Italian.  Which, although it is fairly similar to French, is still amazing.  This is an evening for connoisseurs, but one honed to a relaxed sharpness. 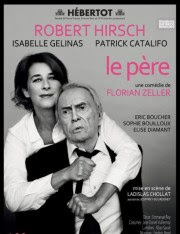 As time was winding down, there was one play I definitely didn’t want to miss.  Luckily it’s been held over so I got a chance to see Robert Hirsch in Le Père at the Théâtre Hébertot.  Hirsch is one of what the French call the monstres sacrés, the sacred giants.  He’s nearing 90 now, and will surely keep acting until he drops dead in the wings, like Molière.  (In fact, much of Hirsch’s career was at the House That Molière Built, the Comédie Française.)  This play, by Florian Zeller and directed by Ladislas Chollat, has Hirsch, as the elderly André, moving in with his daughter Anne, played truthfully by Isabelle Gélinas.  She loves her father... but it’s not easy to become the parent of our parents, or the child of our children.  Gradually the light laughter of the opening scene turns dark as André slips deeper and deeper into the night.  In addition to excellent acting, the casting is also remarkable, as there are multiple personalities for the three supporting roles and even I found myself confused at first.  But the two ears and the tail just have to go to the designer, who came up with a brilliant set that transforms with every curtain rise (about 20 between each short scene).  Each time the room is similar but not the same... and always a bit starker.  Walls are no longer where they were, windows change, furniture appears and disappears, all combining to make the setting unfamiliar.  If this is what growing old is like, I think I’ll get off before I reach that stop.  And yet if Hirsch can flawlessly remember two hours of lines at his age, then maybe there’s hope for us all!

It’s the coldest night of the year so far, but also my last free night in Paris.  So I decide to catch one more play:  La Folle de Chaillot (The Madwoman of Chaillot) by Jean Giraudoux at the Théâtre des Champs-Elysées.  It was written in 1943 - during the Nazi Occupation - but only performed over a year later, when Paris had been free for only a few months and Giraudoux had died.  Yet the play reads as if it were taken straight from today’s headlines.  Why?  Because the villains in this play are... oil executives.  What could be more prophetic?  Act One takes place in a café where the oil mogul and his investors plot to drill under the streets of Paris, which will require blowing up the city official who refused a drilling permit.  Each of the executives is a self-made man, but none will have much to recommend them to St. Peter when they die.  The other characters are simple folk - most of them street people - who stand out colorfully against the black-and-white dress and minds of the villains.  The Madwoman is the most colorful of all (“Don Quixote in a skirt”, says director Didier Long), played forcefully by stage-and-screen star Anny Duperey.  And she sets about foiling the corporate plot, with the help of her strange friends.  Telling you any more would require a Spoiler’s Alert, so I’ll stop there.
This was obviously a larger-budget production than any of the other plays I saw, if only to afford a cast of 18.  The costumes were amazing, the sets as well - intricate and complex.  A welcome but sometimes distracting touch was the talents of the Street People - the vital cameo roles.  The deaf-mute wore those shoe-skates (in red, of course) to zip around the stage.  And then there was the juggler who played in the background with a hoop and a huge white balloon, or juggled with those flimsy plastic bags from the supermarket.  La Folle de Chaillot is a play that everyone interprets differently, but this one has much to recommend it.  Still, you might want to read the play first, because Giraudoux packed a lot into the dialogue, and there’s plenty to digest in this poetic satire that is as pertinent today as it ever could have been when he wrote it.

As I said in opening, Paris has 190 plays currently on stage.  They run the entire gamut of size and genre, as do the theaters where they’re playing.  There are plays to make you think and plays just to make you laugh, plays for children and even plays in different languages.  Most have matinee performances on week-ends for those who are early to bed.  So if you can’t find something to tickle your fancy here... well, you’re beyond hope.  And definitely not very play-ful.

P.S.  In a film version of The Madwoman of Chaillot from 1969, Katharine Hepburn played Aurelia, the title role, with Danny Kaye as the Ragpicker and Yul Brynner as one of the bad guys.