The Lady, the Unicorn and the Roman Baths 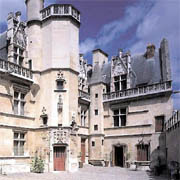 When you’re a student at the Sorbonne - the “real” one, the original - you become familiar with the Quartier Latin, the part of the city that dates waaay back to when Paris was Lutetia.  It’s called “Latin” because Latin was spoken in the university, founded in 1257.
But it could just as well be called “Latin” because when B.C. became A.D. the Romans ruled over France and this was the center of their activities.  There are Roman ruins under Notre-Dame that were discovered while digging to build a banal underground parking lot.  There’s an “arena” where 15,000 inhabitants of Lutetia used to watch plays but where children now play, students work on their tan and only a handful of summer events are held.  And then there are the ruins of the Roman baths that are part of the Cluny Museum, just next door to the Sorbonne.

The Musée de Cluny is housed in the residence that the Benedictine monks of Cluny (Burgundy) built in the French capital in the late 15th century.  As befits its birthdate, it specializes in medieval art.  The artwork was collected over a lifetime by Alexandre de Sommerard, who lived in the residence at the end of his life and bequeathed his name to the entire street, short as it is.  The residence became a museum in 1843 and is known for two things:  those Roman baths and the Unicorn tapestries.
Not much is left of the huge frigidarium, the only part of the baths still standing.  It was burned down by the Huns in the 3rd century A.D., which makes the ruins a stark contrast with the 21st century traffic zipping by just a few feet away.  During my university days, I seem to remember all of it being open to the sky, but now the vaulted ceiling has been restored and it's where the temporary exhibits are housed.
Until March 4th, the ancient walls - which amazingly filter out the noise of traffic - serve as a backdrop for an exhibit of games down through the ages:  “The art of games, from Babylon to Medieval Europe”.  Some are familiar, such as the decks of tarot cards; others are the ancestors of chess, backgammon or cribbage.  There are sets of dice from the days before the Roman Catholic Church banned gambling.  And some pieces are on loan from the collections of the British Museum while others bear prestigious names, such as Charlemagne or Saint Louis (the French crusader king, not the American city). 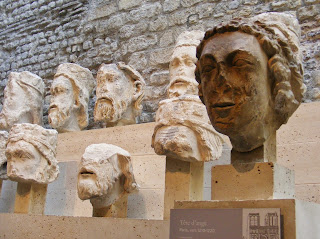 Next to the frigidarium is a room whose bare stone walls are the perfect setting for 21 mutilated heads of the Kings of Judah, sculpted around 1220 and decapitated when the mobs of the French Revolution descended on Notre-Dame.  They were discovered by chance in 1977 during street repairs in the department store district.  Along with other broken statues, they had been sold as rubble to a builder in 1796 and someone buried the heads out of respect.  In spite of their wounds, they are still striking and regal.  Nearby stands a 13th century statue of Adam, bigger than life and preserving his modesty with a fig leaf. 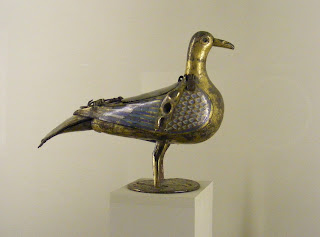 The remaining 21 rooms offer a wealth of medieval artworks:  religious pieces such as crosses, goblets and reliquaries but also the treasures of everyday life ranging from pottery to jewelry to armor.


The highlight of the museum though is the series of six tapestries known as “The Lady and the Unicorn.”  Late 15th century Flemish masterpieces intricately woven of wool and silk, they are the most perfect set that has come down to us.  Each of the five senses is depicted.  For Sight, the Lady holds a looking glass up to the Unicorn and for Taste she is choosing a piece of candy from a dish.  Hearing shows her playing an organ and Touch has her caressing the Unicorn.  Smell is a scene filled with flowers; it’s my favorite because of the little monkey who steals one flower from a basket.  (He seems to be inordinately fond of flowers in these tapestries.)  The monkey also is the key to which sense is being highlighted, in case you're overwhelmed by all the details.
Across the room is the most fabulous tapestry of all:  “My One and Only Desire” which, of course, is purity, or the pursuit of purity.  In it, the Lady puts away her magnificent necklace, renouncing the pleasures and passions of the five senses depicted on the wall opposite.

Although they have been hanging on the walls of Cluny since 1882, the tapestries now have been gathered together in their own circular room.  The lighting is dim in order to preserve the five-century-old colors, but theatrical enough to bring out their vibrancy.  Seating has been provided so you can gaze at them to your heart’s content, contemplating all their symbolism... the lion on the lady’s right representing the Sun and the real world, the unicorn on her left for the Moon and the mythical world, my little monkey for lust and malice, all standing out against a background of animals and mille-fleurs (thousand flowers) that must have ruined the eyes of many a Flemish weaver.

The surrounding gardens are being restored and should be open when the weather stops being so strange.  For the moment, you’re better off snug and warm inside the mansion of the Benedictine monks.  They knew how to live.  At least here in Paris.


For a closer look at The Lady and the Unicorn tapestries,
with some appropriately medieval music, click on:
http://www.youtube.com/watch?v=wTDfmxWBWrE