On the Road - Le Biou: Wine-making Festival in Arbois 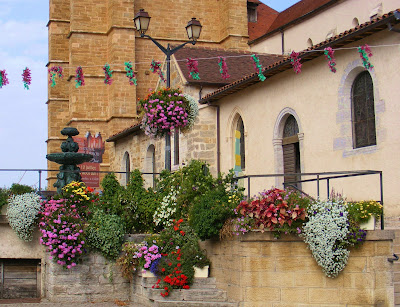 France is an old country. One of the Old Countries, in fact, whose immigrants founded the New World we call Canada and the United States.
And within France, each region has its own separate traditions that have been handed down through the generations. They’re cultural in nature, designed to hold the tribe together, even as the tribe either grew or dispersed. 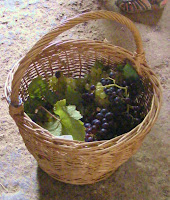 Many have to do with the chief occupation of the region. Which is the case for Le Biou in Arbois, where I just visited friends from Ann Arbor - francophones and -philes like myself who have set down roots in this country as well as their own. They urged me to come this week-end because it’s a major festivity in this rural community whose life is centered on wine-making.
Arbois, in the Jura hills of eastern France bordering on Switzerland, has a population of about 3,500 and a mini-climate that grapes enjoy. It’s known nationally for the "yellow" wine it produces, pressed from the savagnin grape. This vin jaune is more like a dry sherry actually - aged six years - and it’s an appelation contrôlée. (Wine connoisseurs will know what that means; the rest of you need only know that means it’s closely monitored.)
So every first week-end in September, all the grape-growers get together and work all day Saturday to decorate a huge top-shaped frame made out of thick, traditionally-braided wound hemp rope crisscrossed with circles of strong wire. On it they hang perfect bunches of grapes - both white and red - from the upcoming harvest. It takes about 1,000 bunches of grapes to cover the frame completely. When the whole thing is finished, they top it off with flowers and small flags (of Arbois, France, and the European Union). They’ve been doing this since at least 1665, but it probably dates back long before then. 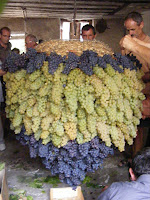 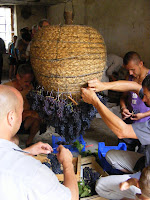 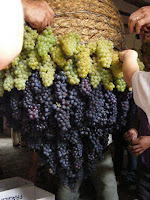 The completed biou weighs about 90 kg (200 pounds) and is almost as tall as the men who carry it Sunday morning all the way through town to Saint-Just Church, where it’s hoisted up way above the heads of the congregation. It’s left for three weeks, offered up to God in thanks for the harvest. (I’ve been told plastic has to be set down to protect the church’s paving stones because if you hang grapes for three weeks, you’re bound to have some grape juice come raining down.) 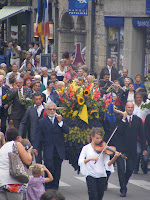 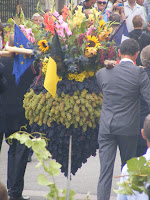 Then Mass is said, after which there’s a second parade through town. This time a ring of grapes is placed on the Monument aux Morts, a monument to the soldiers (and sometimes civilians) who died in World War I. Every town in France, no matter how small, has such a Monument to the Fallen. Most have added on the names of the victims of World War II, and some even add the soldiers who died in Indochina (Vietnam, as American veterans would know it) and in the Algerian War. The firemen come out with their hook-and-ladder to carry the ring of grapes to the very top of the monument, brass bands play, the Marseillaise is sung, and the mayor gives a speech. 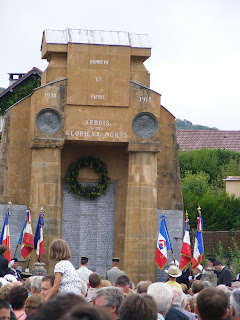 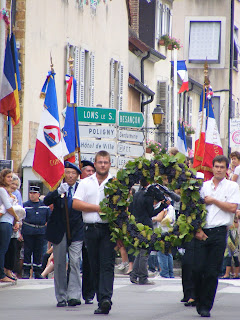 The festivities also include a contest where anyone who wants to can paint/draw/sketch anything in Arbois. They have from 8 am to 4 pm, and the artwork has to be done on a sheet of paper handed out by the authorities and stamped by them so there can be no cheating. Everyone has the same amount of time, and the results are very interesting. I found that many of the artists must have been a bit depressed at the ending of summer because there was so much brown and black used to depict a countryside that is rich in greens and a town built largely out of sunny yellow stone. But then again, I take photos; I don’t paint.
I’m sure I’ve forgotten something. Oh yes! You can walk around town and taste all the wines sold at the various shops... and there are a slew of them! Plus there are the usual rides for children. And a dance at the fire station. And fireworks. But all that is pretty standard. Le Biou isn’t. It’s unique. And it’s been going on for centuries. 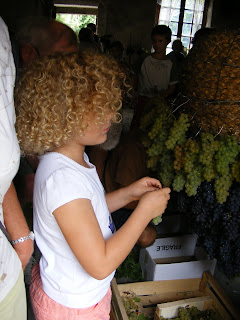 When one female wine merchant was asked if she’d ever helped make the biou, she shook her head and said quite firmly, "Non, non, women are never allowed to make the biou." But in the barn where it was wired together, two little girls were helping. One in particular, an angelic ten-year-old with curly blonde hair, worked very hard, asking her father often, "Am I doing it right, mon papa?" Maybe there’s a new generation coming up who can not only grow the grapes and sell the wine but also lend a hand in making this traditional emblem of regional pride.

P.S. This year, the completed biou fell on Saturday evening. You can’t offer up crushed grapes. Each bunch hung had been carefully inspected and vetted, so the whole bottom section had to be redone. 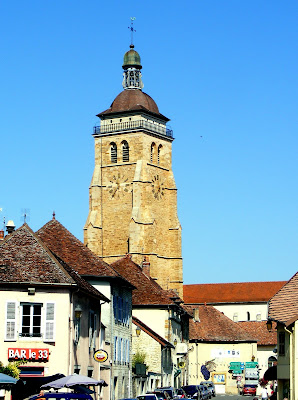