On the Road: Giverny without "Giverny" 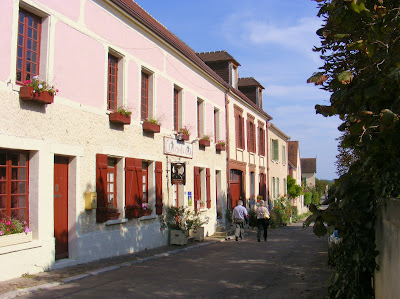 Some days are just golden.
This morning I went across the square for a pain au chocolat - again! - and the sky was blue and parents were walking their children uphill to the nursery or downhill to grade school. I sat and watched the French morning show over tea and my pastry. Then one of the segments talked about an exhibit at Giverny in Normandy. Which sounded like a brilliant excursion.
I’ve visited Monet’s home and garden in Giverny about a dozen times, in all seasons. But each of those times, I was guiding tourists and in a rental car. This time there are no tourists. Only me. I can take as long as I want. And I can take the train, which I’ve never done. There’s one about every hour from the Gare St. Lazare, the train station Monet and other Impressionists painted. How very fitting, I think. And it’s a straight shot from my Métro stop. So I’m off, nez au vent as the French say. My nose in the wind (a sailing term).
The train trip takes only 45 minutes, with one stop. Usually. On this occasion, we also stop a second time - for half an hour - because the train in front of ours has broken down. That gives me ample time to get to know the people sitting next to me. As usual, I initiate things. I point at the lady’s flowered scarf and say, "You’re going to Giverny." She asks how I knew. They’re Irish. And delightful. It starts raining. Things are looking bad: rain and a stalled train. What next? We keep our spirits up by talking for the "indeterminate lapse of time" announced by the train conductor over the PA. Finally the train starts up again and we make it to Vernon, where the shuttle bus stands waiting in front of the station. We pay our €4 for a round-trip ticket and the chatty driver delivers us to the village of Giverny. (There’s a bus waiting to meet every train, so you don’t have to worry about connections.) I point my new Irish friends toward Monet’s house-and-garden-and-lily-pond and we say our good-byes. Delightful people. Did I say that already? 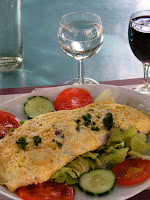 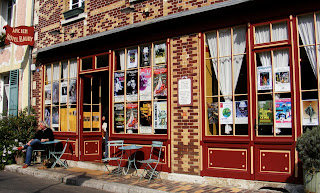 Given that it’s almost noon, I’m feeling peckish. I’ve often heard and read about Hôtel Baudy, the living quarters of the American artist colony that formed around Monet, and which included John Singer Sargent and Theodore Butler. Although it hasn’t been a hotel for some time, it still serves meals, so off I go. First things first. Art can wait. I have all afternoon.
Vincent, the waiter, seats me on the terrace and takes my order with a smile: an omelette Baudy (with potatoes and duck confit), some slices of tomato and cucumber on the side, a glass of chinon rouge and a carafe of water. When my food arrives, I think I’m back in the States. The omelette takes up the whole plate!
"How many eggs are in this?" I ask Vincent.
"Three," he replies.
"Good Lord, how big are your chickens?!" I exclaim.
In spite of my hunger and the beautiful weather and the deliciousness of it all, there is no way I can make it through the omelette, but I do my best. Vincent chides me: "If you don’t finish it, I’ll have to tack on a supplement. Or call the chef out here." I placate him by ordering an Earl Grey tea, which arrives in a delightful white china teapot all of its own. 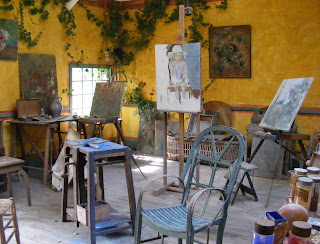 After lunch I take a peek at the studio in the garden, built by the Baudys for their artist boarders. The much-famed rose garden is past its prime in September, but some roses are still holding on and the garden is amazing in the intricate use made of the hillside. The garden seems much bigger than it is, offering secluded spots that are really only just around the corner from one another. And it feels much as it must have felt one hundred years ago.
Then I take a walk through the village. There are still artists and art galleries. And bicyclists pedaling through town to some destination or another, most speaking in foreign tongues (i.e. not French). I stop to read the information signs the town has put up in front of all the historic houses to explain who lived and painted where and when. 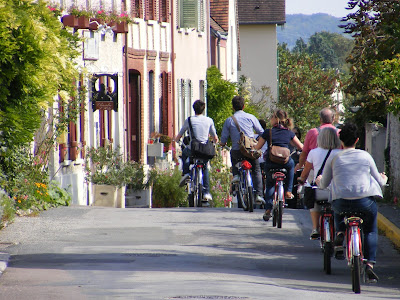 There’s also a little Norman-style church where Monet is buried. It’s easy to find his grave. It’s covered - planted - with flowers, identical to his garden. And he’s buried with most of the members of his family, although the cross above it all is for Suzanne Butler, Monet’s step-daughter and wife of American Impressionist Theodore Butler, who also paid to restore the organ inside the 15th century church.
The village itself is a strange mix. All the turmoil is down at one end, around Monet’s house and garden. The rest of the village is left to its 500-odd residents, not all of whom are artists. (A gendarme’s van is parked outside one home.) It has a few galleries and one antique shop and a real estate agent, but no place to do your food shopping. A few houses date back to the Middle Ages but most were built in the 19th century. And flowers are everywhere, as is birdsong and cricket-chirp. 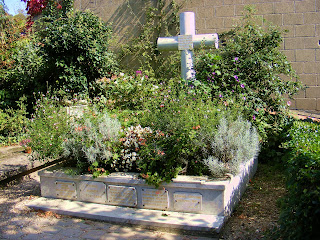 Having walked the length of the village, I decide it’s time to focus on the reason for my trip out here in the first place - the Clark Collection: From Manet to Renoir. It’s on loan to what used to be the Musée d’Art Américain founded by Daniel Terra in 1992 to "explore the historic and aesthetic connections between French and American artists", and so was heavy on Impressionists - thus the choice of Giverny. Unfortunately for the museum, it more or less died with Terra in 1996, barely hanging on for another decade. Luckily it was taken over in 2006 by local authorities, working with the Musée d’Orsay Impressionist museum in Paris. This season it’s hosting an impressive (pun intended) collection of some 70 paintings built up by Sterling Clark, heir to the Singer sewing machine fortune, and his wife Francine. They were particularly fond of Renoir - which accounts for why there are 20 of his works - but there are also paintings by Manet, Monet, Pissarro, Sisley, Degas and many others.
The museum is a beautiful piece of architecture in and of itself - three different levels set into the hillside, windows near the ceiling and only facing north, as an artist’s studio would be. The floor is of honey-colored wood and walls are painted in one different bright color for each level, colors that set off the artwork. Although he lived in the house at the corner of my street in Montmartre, I’m not a particular fan of Renoir - largely because his women are always overly ruddy-faced. But these works of his are from his earlier period and my favorite is Venice, the Doge’s Palace (1881), with blue sky and water in feathery strokes. Monet’s Geese in the Brook (1874) is a precursor of his later white turkey canvas yet a style a bit apart from his usual. Moss Roses in a Vase (1882) by Manet manages to look like the flowers were just arranged in fresh water a minute ago. But for me, both ears and the tail go to Berthe Morisot for The Bath, showing a pale young woman, her arms upstretched, tying her hair in a knot, unaware we’re all staring at her. She seems so frail, as if Life hasn’t dealt her (m)any hard blows yet. That’s only my impression, but that’s what Impressionism is, isn’t it?
After the museum, it’s time to start back to Paris. I have no idea what time it is because I don’t wear a watch. Judging by the shadows, it’s probably around 5:00. I head back to the drop-off point, hoping there’ll be a shuttle bus in my not-too-distant future. When I come around the corner, there it is... with just enough room for a few more of us, standing in the aisle. In only five minutes we’re back at the station, with a train announced in only half an hour. Enough time to buy a bottle of water, which is good because it’s turned out to be a warm, sunny day and I’ve not only got a bit of a tan but also a parched throat. As I sit on the platform, who should round the corner but my Irish friends. It appears they were somewhere on that same bus. And now we cement our friendship during the ride back to Paris - no stopping on the tracks this time. We say good-bye - again - in the Métro, with cheek-kisses all around and promises to keep in touch.
Sunshine, fresh air, good food, fine art and new friends. Plus a piece of Impressionist art of my own that I bought at one of the galleries in Giverny. A bit of today to mount on my wall.
Yes, it’s been a golden day. 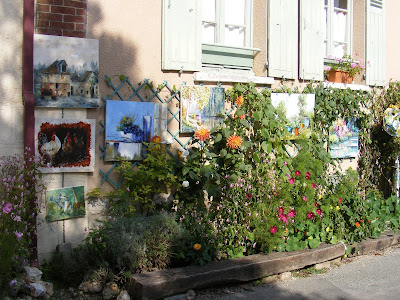