On the road: Take (the) A Train, or A lesson in French geography and history

There are six train stations in Paris, and each dispatches passengers off in a different direction. Today my station is Montparnasse and the direction is southwest. Destination: Bordeaux, to visit friends who used to have a restaurant around the corner from me in Montmartre. 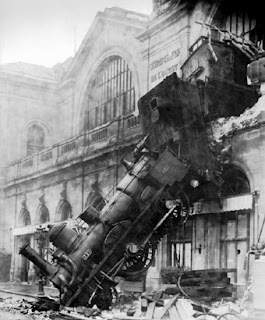 Montparnasse is a modern station that replaced the one pictured in this photo (one of my favorite old photos of Paris). It dates from the reign of President Pompidou, a man besotted with all things modern. And as do all French presidents, he put his stamp on Paris with modern buildings such as the Centre Pompidou museum for contemporary art - otherwise known as La Raffinerie because of its resemblance to a refinery tarted out in bright colored tubing on the exterior. He also bequeathed to Paris those parts of the city that are high-rises: Chinatown in the 13è arrondissement, the La Défense business center at the west gate to Paris, and the skyscraper in front of the Montparnasse station, which put a definitive kibosh on any other skyscrapers in the center of Paris. 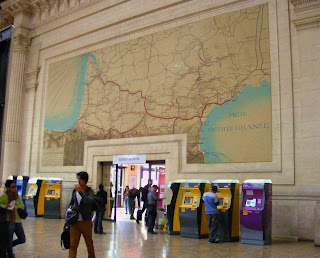 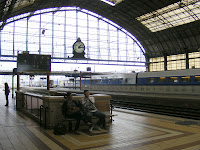 The TGV pulls into the station on time and disgorges a stream of passengers while rail workers disconnect the four front cars - destined for the Spanish border - from the other four, off to deliver my two priests to their place of miracles. I walk out into the sun shining benevolently on Bordeaux to find the shiny, sleek new tram waiting. The last leg of my train trip to lunch in the new restaurant of my old Montmartre friends.
﻿
﻿ 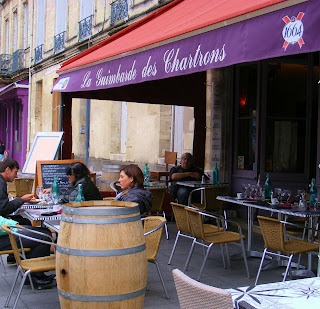 And that, ladies and gentlemen, is train travel in France.