On the Road: Bordeaux - More than just claret wine Bordeaux is a rich city, its wealth built largely on wine. But in even earlier days, another economic sector in which it excelled was the "triangular trade", and more specifically bois d’ébène - ebony wood - otherwise known as slaves.
All college students in France depend on a university within their region. All students in a given region go to the university of that region, unless they’re studying certain special subjects which aren’t taught there. In Paris, it’s Paris - its own little region. In the provinces, universities are located in the major cities: Rennes, Grenoble, Aix, Montpellier, Lille, Bordeaux... etc, etc, etc. Until recently, all students from the colonies - of which France had many scattered across the globe - were governed by the rectorat of Bordeaux and went to college there. Which I always felt was cruel to the sons and daughters of ex-slaves whose ancestors had been sold into slavery by traders right here in Bordeaux.

Be that as it may, I’m off to Bordeaux... to visit friends who used to have a restaurant in Montmartre. An excellent, reasonably-priced and friendly restaurant where I spent an inordinate amount of time and money.
Thanks to the TGV bullet train (see my previous blog, Take (the) A Train), that trip now takes only three hours to cover a distance of about 500 km (300 miles). Because I arrive during lunch hour, I’m on my own to make my way to their new restaurant, La Guimbarde des Chartrons. It’s in a neighborhood called Les Chartrons because of the Chartreux convent founded there way back when the area was a marsh (think green Chartreuse liqueur). My instructions are to catch the Tram C right in front of the train station. I fight with the tram ticket machine because here - as in the Paris Métro and in the States as well - entry-level jobs such as ticket sales are now performed by machines that don’t ask for raises or apply for overtime or go on strike. Luckily, a not-too-soused panhandler comes up and helps me out, for which I give him a whopping euro, almost as much as the ticket, but hey, who’s counting? He was nice about it and very enterprising. 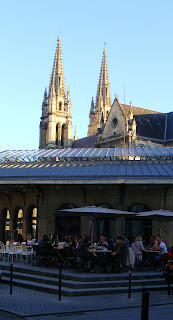 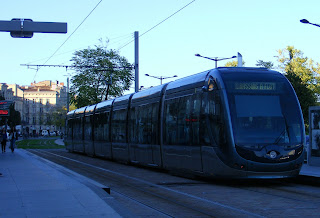 The tram makes no noise as we glide along tracks laid into the streets. I’m glad I don’t have to drive in Bordeaux because this system is amazing but it makes it hard to know which part of the street is fair game for cars. It also keeps you on your toes crossing the street/tracks on foot! It’s the first tram system in the world to operate with power provided both from lines overhead and from rails below. An either/or, push-me/pull-me type operation that must have its raison d’être but I’m darned if I know what it is. I stand in the front car so I can watch the driver in his little plexiglass cockpit, safe behind a locked door. I have fun figuring out how it all works. He speeds up or slows down by sliding a handle forward or back as the lights along the tram line go from horizontal (stop) - plus an exclamation point - to vertical (go). So now maybe I can get hired if the writing of books and taking of photos don’t work out for me.
The tram stop is near the Place du Marché des Chartrons, an octagonal building that used to be the neighborhood farmer’s market but is now a center for cultural events - which is pretty standard recycling of urban structures in French cities. It reminds me quite a bit of the old Les Halles market buildings in Paris that were torn down in the late Sixties. But as Lélia, Gilles and I have a lot of catching up to do - and as they have a large dinner crowd to serve - the rest of Bordeaux will have to wait until tomorrow.
﻿﻿
﻿﻿ 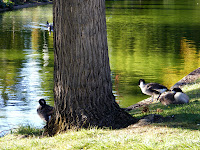 Day 2: I’m not allowed to help set up the restaurant in the morning. Or I’m dispensed of working. Depends on how you look at it. Lunch comes early so that they can be ready for the customers by noon. But after the dust settles, Lélia takes me for a walk in Jardin Public, a huge public garden that didn’t deserve a name of its own, I guess. We sit and have a cup of tea while Tino, their dog, sleeps under the table. Mothers walk by with children, students push bikes, and then I spot something familiar on the pond: Canada geese! Even over here! Then it’s back to the restaurant to get ready for the dinner crowd. 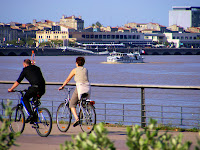 Not hungry yet, and prodded on by Gilles to see the riverside, I go on a photo safari. He was right in telling me it’s been greatly improved, and even resurrected from the rundown series of warehouses required by its port activities. They’re all gone now - moved further downriver, I believe - replaced by a wide esplanade of garden, cafés and pavement that attracts skaters, bikers and just plain strollers. A perfect place to watch the sun set on the Pont de Pierre (Stone Bridge), the churches and all the majestic buildings that colonial trade built. The way back to the restaurant is dotted with antiques shops and small bars that seem to focus on the young crowd. The sun goes down and the party starts, at least for some.
Day 3: This is my day to explore the city in depth, because I leave tomorrow around noon. So I help with the setting-up (having watched very carefully yesterday from the sidelines) and the work goes really fast. If the tram-driver job doesn’t work out, I could always have a fall-back job here. Hell, I’d be willing to work for the food alone! So after our early lunch, I take off with my trusty camera. 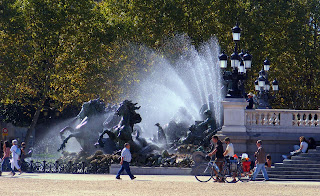 Bordeaux has a population of about a quarter of a million and covers quite an area, so I concentrate on the central bit, all within walking distance. After all, I have all day. First stop on my circuit is the tourist office to get a map of the city (as you can in most cities and even towns in France). On the way across the graveled Esplanade des Quinconces - one of the largest squares in France - I stop at a monumental fountain, a tribute to the local Girondins who were moderates during the French Revolution and many were executed as counter-revolutionaries as the blood frenzy took over near its end. The fountain was dismantled by the Germans, the statues melted down to get their 52 tonnes of bronze... and only completely restored in 1983.

The mademoiselle behind the tourist office counter points me in the direction of the city’s biggest book store - Librairie Mollat - so I can (hopefully) find a book that’s been sold out in Paris. The streets are abuzz with people because most of central Bordeaux is pedestrian; some large streets are open to traffic, but - as in Paris - why would you want a car with such a good mass transit system... and so few places to park? 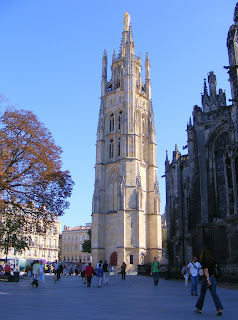 Bordeaux still has six monumental gates, most built in the 18th century for show rather than for protection. I pass the Porte Dijeaux (1746) and end up at one of the largest squares in the city, where Church and State seem still to be vying for power. In the middle of the vast square, Cathédrale St. André - most of which dates from the 14th and 15th century but some going back to 1096 - and its separate tower, the flamboyant Gothic Tour Pey-Berland. Facing it, City Hall, where local boy Alain Juppé is still mayor... and also the Foreign Minister of France. Life wasn’t always this rosy for Juppé. In 2004 he was given a suspended sentence for a misuse of public funds - not for his personal enrichment but to promote the political party he represented. Most people feel he "took the rap" for Jacques Chirac. Juppé was elected Mayor of Bordeaux again after his ineligibility time was over, and he has proven a very good mayor indeed. Who knows? One day he may be President himself!
I wander through the narrow, winding streets of the older section of the city - the part nearer the river - and end up at Eglise St. Pierre, equally old but more intimate by far than the Cathedral. As I come out, I look up and see a guy seemingly suspended in mid-air but actually perched on a tiny balcony, typing away on his laptop. A strange juxtaposition of eras, almost like time travel. 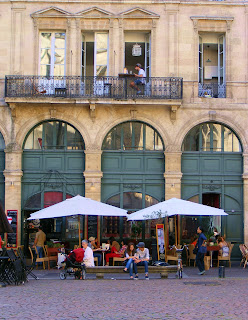 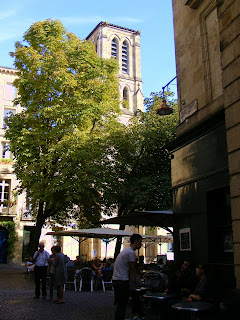 The sky is still resolutely blue but the shadows are getting longer. It’s time to head back. And what better way to do it than along the river? I exit medieval Bordeaux onto the hugeness of Place de la Bourse, a testimony to the city’s wealth - if any were needed.
Across from it is a reflecting pool not even an inch deep... just enough to amuse children and photographers alike. 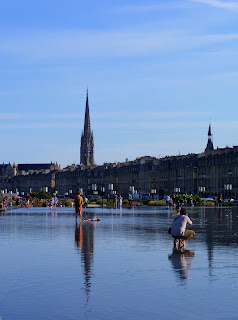 Although it’s a week-night, there’s plenty of animation along the riverside. On my way back to the restaurant, I pass picnickners, a father playing with his infant son, lovers on park benches - oblivious to the universe - and even in-line skaters practicing tirelessly. It’s nice to see these old docks given over to Life with a capital L. It’s helped me come to terms with this city and its slave trade past. 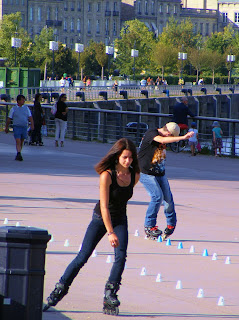 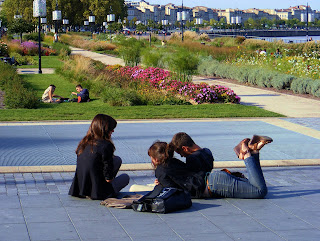 I’ll leave Bordeaux tomorrow with a lighter heart and warmer feelings toward this sixth largest city of France. I think that calls for a glass of claret!