On the Road: Biarritz

After three days in Bordeaux, it’s time to be off again, further south. As far south as you can go in France without being in Spain. Le pays basque - Basque country.
It’s back to the train station via Tram C. Then a check of which platform the train leaves from... and for that I need to know that the train’s ultimate destination is Irun, just across the border in Spain. Then I look at my ticket to see which car I’m in because the platform is long and I don’t want to have to walk through the entire train, not to mention ending up at the wrong destination (see below). Luckily, French Rail has devised a neat little helper that tells me where my car will stop on the platform. I remember using that once to amaze some American tourists - "I’ll make our car stop right in front of us". Little did they know that I’d checked it out and walked them nonchalantly to the appropriate letter painted on the platform. 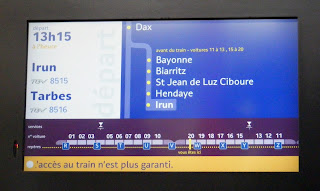 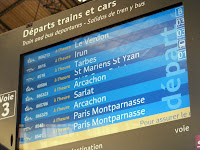 The train that started off from Paris to Tour at 300 km/hr, then slowed to 180 is now chugging across the countryside at what seems like a snail’s pace. This part of France - Les Landes - is all pine forest. Mostly maritime pine, like the pines of Jersey’s central Shore. Landes means moor, and before Napoleon III had it drained and all these pines planted, it was a place of grazing sheep and shepherds on stilts - which meant they could cover up to 20 km a day and see out over great distances. But now it’s all forest. In fact the biggest forest in all of France. In 2009, a hurricane-category storm decimated a large part of these trees, and some of the damage can still be seen from the train - tree-size toothpicks half blown over, stripped of any limbs and even some bark. Luckily for the "tree farms", most of the timber was still good to use and is still being sawed up into lumber. Both timber and lumber are piled neatly, waiting for transport.

The train stops in Dax, the nerve center of Les Landes, and half of it is unhooked to head into the Pyrenees. (Remember the two priests on the train down from Paris?) The rest of us chug slowly off into Basque territory. Gradually Basque-style houses start popping up through the trees... similar to Swiss chalets but with trim painted red or green, the colors of the Basque flag. The next stop is Bayonne, which any French chocolate-lover should revere because chocolate arrived in France via this port. It was also a whaling center, with its Basque crew sailing all the way to New England and the Great Banks as early as the 17th century... quite a sail for those days and those ships!

Finally we reach Biarritz, a seaside resort made famous by Napoleon III and his Empress Eugénie. My friend Catherine meets me at the station under a grey sky. (It often seems to be grey when I come, although skies are usually blue pretty much year-round here.) Oh well! We won’t be walking around today anyway.


The next morning, the sun makes its appearance and we’re off and running. Well, walking. Unlike Bordeaux, there aren’t a lot of monuments here, but the beauty of the coastline is striking. Rocky, like the New England coast.  All attention here is directed at the sea. We walk uphill to the lighthouse, a sensible thing to have on a coast like this. Given that I spent my childhood summers on the Atlantic, I could spend all day just watching the sea. It’s always changing, always in motion. Out at sea, the waters look calm. No whitecaps. But near shore, in shallow water, breakers form... and that’s what makes this the capital for surfers. Today’s waves are too close together to make for a good run, but some boards are out anyway. They just bob about, waiting for The Right One, which doesn’t come. 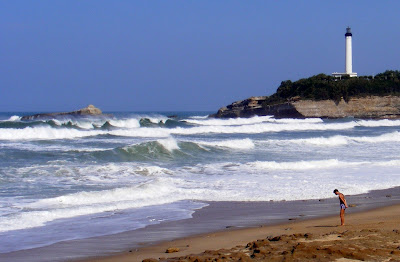 We make our way down to the sandy beach, where neither of us can resist rolling up our pants to dabble our toes in the water, which is wonderfully warm still for this late in September. Anyone who hasn’t understood the force of the ocean should rethink. Just standing knee-deep in the water, you feel the pull as the wave recedes. It scoops out the sand from beneath your feet and pulls your legs out from under you. It would be all too easy to drown here, pounded by the crashing of the waves. In fact, there’s a sign stuck into the sand that warns against swimming today. Tomorrow may be different, but none of the bathers is doing more than just getting wet today.
It’s fun to watch the show on the beach. There’s a man with a dog - the beach isn’t off-limits to them - and he’s frantically digging a hole, spewing sand out in a roostertail behind him. And there’s a little boy who is too impressed by the crashing waves to want to be dragged down to the sea’s edge by his mother. There are two overly-tanned women of indeterminate age sunning themselves, bra-less and with only a string between their nether-cheeks. There’s a couple eating a home-cooked lunch out of Tupperware. And a lot of retirees just enjoying each other and the sun-and-sand-and-sea. The surfers tend to ignore them. 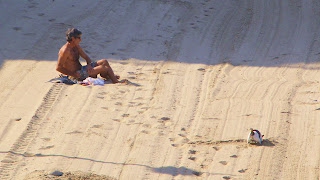 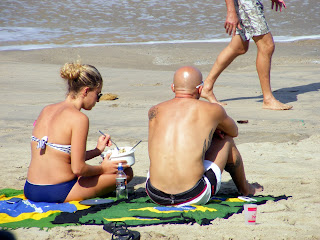 Like I said, there aren’t a lot of monuments in Biarritz. That’s not what this town does. What it does is holidays and leisure. There are two casinos - the old one and the new - because this once was a place for the über-rich to come and "take the waters" before the croupiers would "take" them for piles of money. It also has a modern thalassotherapy spa where you can be sprayed with water spewing out of a nozzle at gale force 7, along with other things such as seaweed wraps and Lord knows what else. I’ll have to try it some day. There’s also the Villa Belsa, built against all logic on a rocky promontory and standing alone in the line of fire from waves that started out from the opposite side of the Atlantic. And Empress Eugénie’s summer palace, where she and Napoleon III came every year, along with the nobility of Spain, Belgium, England, Germany, Portugal and even far-off Russia, That mansion is now the Hôtel du Palais, complete with yet another spa. (Most of the large hotels offer spa services.) 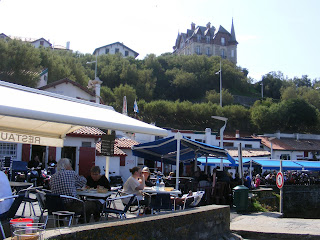 We stop for lunch in the minuscule Port des Pêcheurs, which provides well-needed shelter for a small fleet of fishing boats. As we enjoy three different versions of fresh anchovies, flash-grilled shrimp and broiled cod, the waves build up in size and force, crashing over the breakwaters. I wonder how that fisherman on the pier expects to catch anything in all this turbulence, but maybe he’s just enjoying himself. 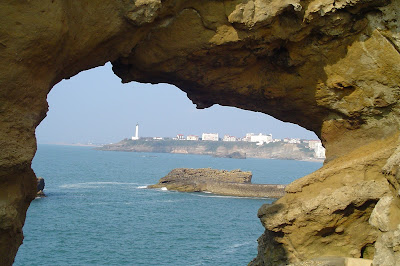 After lunch we walk through streets closed to traffic for a braderie, which means all the shops have put their goods out on the sidewalk at reduced prices. A kind of city-wide end-of-summer sale. We take the local bus to the next town south: Bidart - much smaller and more typical of all things Basque. There’s a little church with a fortress-looking steeple and a model ship hanging from the rafters. There’s also a fronton for la pelote basque, or what people in Florida would call jai-alai... eusko pilota in Basque, which is a language different from any other on Earth. It looks hard-sounding when you see it written on street signs (town center = hiri barnea, seafront = itsasbazterra), but rolls off Catherine’s tongue in a warm bubbly way. She was born in the Basque hills nearby and this is her native language. When she went to grade school, she would get rapped on the knuckles if she spoke a single word of Basque. Then when she went to catechism after class, the priest would give her dozens of Ave Marias to say if she spoke a single word of French. That’s enough to turn people into schizophrenics!

The sea is much calmer here. Or maybe it’s just the calm that comes at the end of the day. Whatever it is, this setting seems to have attracted people from many different countries, judging by the foreign languages I hear all around me. The waiter who serves us our apéritif tells us that Madonna was here for a while this summer. I don’t know how she heard of this place, snug in its Pyrenees setting, but I can see why she chose it.