The Louvre: Been there, done that

Let me preface this piece by saying that it was written several years ago for a newspaper.  Some of the artwork mentioned may have been relocated, so you may not want to take this as a road map of how to tour the Louvre.  It was meant as a spoof of that very idea anyway, so...

As a tour guide and long-time resident of Paris, one question I’m asked almost as often as "What made you stay here all these years?" is "What is there to see in the Louvre?"
The answer is 300,000 works of art displayed over miles and miles of galleries. Unfortunately, of those 300,000, only three seem to be of any interest to most tourists: the Mona Lisa, the Winged Victory of Samothrace and the Venus of Milo.
And even those may be debatable. I remember standing in front of the Mona Lisa next to a lady (from Manhattan judging by her accent) who said "I don’t see what’s so great about it." "Neither do I," replied her companion. "Let’s go shopping." And off they went, credit cards ready for action.
So now, with a view to furthering mankind, here, for all you museum crawlers, is the Fly-By Tour of the Louvre (record time to date: 15 minutes 32 seconds entrance to exit).

Once you wend your way to the head of the line and are actually allowed to enter Pei’s Great Pyramid, you have to buy a ticket, unless you’re 18 or under, or unless it’s the first Sunday in the month, in which case it will be free for you... as well as for a few hundred thousand other people. So let’s assume you have your ticket and your track shoes are laced up and you’ve put film in your camera (no flash, please). You peer around and locate the Denon entrance, then -- hit the stopwatch -- you’re off and running. Well, bobbing and weaving is more like it. 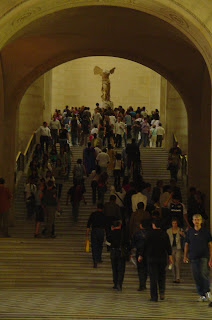 Anyway, you take the escalator up one flight, followed by a second escalator straight ahead, then a third. When you run out of escalators, you take the first right and what do you see? Lo and behold! Treasure Number One: the Winged Victory, standing majestically ... groan ... at the top of a long staircase. (Stop complaining; it wouldn’t have the same effect if it were at the top of a long escalator, would it?) You look down at your stopwatch, adrenaline rushing. Only 3 minutes! Piece of cake!

Almost at the top of the stairs, you take a hard right and head through the Red Room, where you zip past the works of David and Ingres, two of France’s leading painters. Your skills will be tried here, as these canvases are so gigantic it’s hard to ignore them and not get distracted. But with a little determination, you can stride down the long hallway as if it were Concourse B at Metropolitan Airport. When you hit the small square Spanish art room at the end, turn left into Room 7 and bingo! The Mona Lisa! No, seriously, it’s there, across from Jules Romain’s beautiful Portrait of Joan of Aragon. Right there! Behind the crowd of gawkers and flash-crazed photographers. Behind that plate glass. No, really, that’s it. The tiny dark canvas of the lady looking fed up. 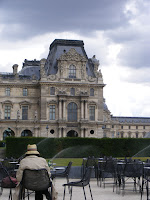 Now you’re two-thirds of the way down your list. And it’s only been 7 minutes! This is like taking candy from a baby, you think. But don’t let yourself become smug. The worst is yet to come. Swept along by the crowd, like a salmon headed upstream to spawn, you zigzag through that DaVinci Cluster and on into the next hall, filled with centuries of religious paintings from all over Europe. Protestants may have a slight edge here, because a Catholic upbringing can slow you down as guilt builds from turning a blind eye to all these Biblical scenes you learned about in Sister Mary Magdalena’s catechism class. But even Protestants will have to take long strides to keep the pace as the stopwatch ticks the seconds away. Forget Messina’s Portrait of a Condottiere on the right wall. Race resolutely to the end of the hall, turn left past the gentle beauty of Botticelli’s frescos and the 4th century Roman mosaic courtyard below, past the Winged Victory (again) and down the steps two by two. At the foot of the stairs, hang a sharp right around the corner. As you push past art lovers from around the globe, you finally spot her at the end of that long hall: Number 3. I mean, Venus of Milo. No need to go any further. 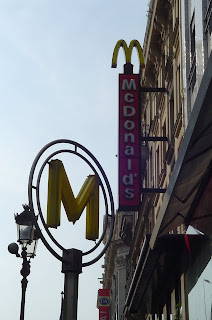 Just race back down the hall, left, down again (forget the escalator, it’ll only slow you down) and you can scratch the Louvre off your "List of Things to See in Paris". Check your time, and if it’s under 15 minutes 32 seconds, you win.
Now how about cooling off with something typically French to celebrate? Like Haagen-Dazs or a Coke at McDonald’s. But hurry up. We still have all the Impressionists at the Orsay Museum to see before the bus leaves for Brussels.