When you live in my part of Montmartre, you never know what you’re going to find when you open the door to the street.

Once it was a tragi-comedy involving cars, tow trucks, a German, and a French lady in a bathrobe (see "The Early Show, Paris-style", Sept 9, 2011). This morning it was a film crew. Yet another one. 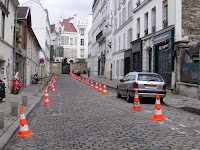 We had been forewarned. Those red traffic cones appeared up and down the entire street last Friday. Production crews put advance notices on all the windshields and on each building, asking people to remove their cars by Monday.
This particular shoot will be a film called "Boule et Bill", who are French comic book characters - a boy and his dog. The notice said it would be filmed in "period costume" - as the comic strip takes place in the Fifties or Sixties - so they would be very grateful if we would please not park our "contemporary vehicles" on the streets. They would even pay for parking from Friday through Monday, and they left their cell phone number. They even stipulated where the two closest parking structures were. Now there’s a production cost I bet you’d never thought about!
They begged our forgiveness for any bother this occasioned and said they would be as discreet as possible. Knowing film crews, that wasn’t going to be very discreet but it’s usually fun, especially when, like me, you don’t own a "contemporary vehicle". (Although I was tempted to go out and rent a vintage car and park it there, just to see what they’d do.) 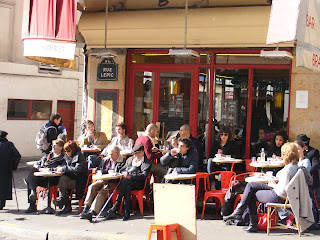 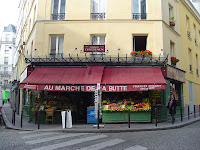 The most famous movie filmed in the neighborhood was Le Fabuleux Destin d’Amélie Poulain in 2001... or just plain Amélie as it’s known in the States. Thanks to that movie, property values soared in the neighborhood and even more foreigners moved in. I can tell you where every single scene of that movie was shot, Montmartre having been my home now for well over 30 years. Right around the corner is Collignon’s grocery shop and down the way is the café where Amélie worked. The park with the merry-go-round and fake phone booth is right across from my old place. 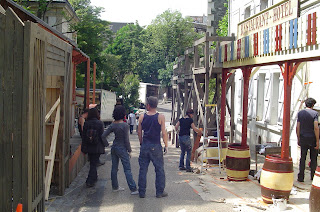 And then there are the other anonymous film shoots, such as the movie set that I discovered being built in the rue de l’Abreuvoir one day. I’m not sure what it was supposed to be because parts of it looked like a Western, but it was probably something from the turn of the century.
It’s always fun to happen upon these shoots, especially as my son was in movies for about ten years here in France. It is truly a world unto itself. 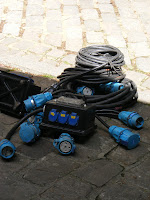 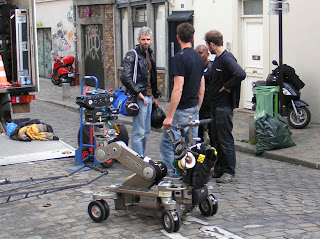 Monday morning the trucks showed up. The equipment ones first, parking in my street for their staging area. A lot of young guys ran around with wires and lights and rails for the traveling shots.

Then I had to go to visit my dentist near L’Etoile. It was almost lunch time and a cantina of sorts had been set up in my street. 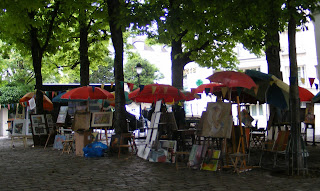 As I crossed the small square that had been commandeered for the shoot, it was obvious that many people had been working very fast since early morning. The square was decked out with easels galore and it looked strikingly like the artists’ colony up on the Place du Tertre, except it was listing heavily to starboard. By the stairs, track was being laid down for a traveling shot and there was red-and-white ribbon to keep passers-by from getting in the way, with a few guys left to guard the area and the equipment.

Later, as I was walking back to the métro with my teeth a-sparkle, I saw a caravan of three huge white trucks marked StudioPhil on the side. Obviously make-up and costume trucks. Although there may be several films shooting in Paris on any given day, and I was about two miles from my neighborhood, I had a sneaking suspicion that I knew just where these trucks were headed. 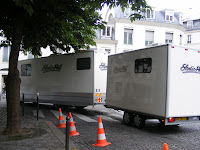 Sure enough, when I got out of the métro and walked up the hill toward home, there they were, trying to back into position in a side street. I felt like Sherlock Holmes - finger on the pulse of the French movie world.

As the day wore on, great progress was made. Dozens of extras milled about, getting their hair fixed and their make-up touched up, their Sixties clothes set a-right. The director’s assistants paced back and forth, script in hand, making sure everyone knew their spots. The crew scurried about testing the camera’s tracks, adjusting the klieg lights, orienting the big white reflectors that distribute the light evenly. It was almost like watching the NASA crew right before a rocket launch. 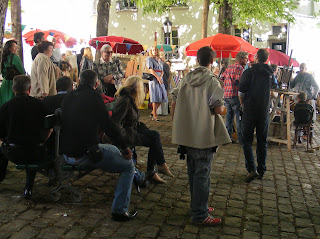 The acting part only started around 4. But I had to wash my hair before my dinner appointment, so I stopped my periodic forays around the corner to the set and missed out on the actual shooting. Which is probably just as well. They’re an irritable bunch between "Action!" and "Cut!"

When I left for the restaurant this evening at 7:30, people were packing things back up in my street. No mean task! The crew was saying their good byes, moving on to tables at cafés where they would dissect the day’s shoot while someone raced the film to the laboratory. By the time I got back from dinner at 10 o'clock, all the trucks were gone and the "contemporary vehicles" had reclaimed every single parking place on the street. You’d never have known the neighborhood had survived a whole day of raucous siege by an entire movie crew.
All that fuss for probably just one scene.
It will always amaze me, when I see a movie, how much work goes into creating those two hours of make-believe.