On the Road: Fast Track to Amsterdam

A French train is a wonderful thing. It leaves on time, for starters. And most of the time it arrives on time. If it’s more than 30 minutes late through faults of its own, it will reimburse your ticket. The only time that happened to me, it was because the bullet train hit a deer and we were stopped on the tracks for about an hour. I thought that should be considered their fault because they obviously had an opening in their Anti-Deer Fence somewhere along the tracks, but they said the deer was one of the Good Lord’s Creatures and that made it an Act of God.
Anyway, here I am on the fast train to Amsterdam for a long week-end. And in first class, no less. With French Rail (SNCF), the cost of the ticket depends somewhat on supply and demand. So if second class is sold out but there are seats galore in first, you can buy a first-class ticket for only a few euros more... or sometime for even less that a second class ticket. First class no longer comes with all the bells and whistles, but still has its advantages. It’s far more roomy than second - three seats across instead of four, more legroom, with a wider aisle for your luggage to roll down. Plus they offer a selection of free newspapers when you get on. But don’t bother looking for Huma (the Communist Party’s paper) or even left-wing Libé; those must not be newspapers First Class People would want to read.
So here I am, seated in an almost empty car, only 20 minutes out of Paris and the Goodies Cart has already been down the aisle.. Free stuff to drink and a pastry or a mini-sandwich served by a friendly lady in chic navy blue SNCF uniform. And this is only a snack; there’ll be lunch between Brussels and Amsterdam. All this included in the price.
As we speed by Roissy-CDG Airport, an Airbus is taking off. Looks for a moment like it wants to race us. But then it’s gone and there are only the flatlands north of Paris that grow so much of France’s food. Crops aren’t very high in the fields yet because it’s been a hugely wet and cold spring. But soon there’ll be wheat and lots and lots of sugar beets. And alternating with the fields are woods. I think France has the most forest of any of the European countries. That’s because the King loved to hunt and such forests were generally the property of the Crown. When the head that bore the Crown was detached at the neck, the forests became the property of the government, which has protected them from destruction ever since.
﻿﻿
﻿﻿      Suddenly, standing tall against the blue sky, are the first windmills. At least a dozen huge white giants, their three arms turning with slow determination. There will be many more wind farms before we reach the French border. They’re a far cry from their frail ancestors. It always seems like it would take a powerful lot of wind to budge something so big. But turn they do and France gets most of its non-nuclear energy from wind power.
As we speed along, there are the requisite number of little towns (some only visible on the horizon), each with its own church spire. But they fly by so fast you barely have time to see them. And sometimes we race the cars on the superhighway. French planners figured "why ruin two landscapes" so they ran the bullet-train close to the highway. The rails are more of a straight line though. It’s quite a feat of engineering to turn a train traveling at 300 kilometers per hour (180 mph) and it requires serious canting and constant maintenance of rails, ballast and infrastructure.

An hour into the trip and there are more and more factory smokestacks in view. And more windmills. The church spires have changed shape and the sky has clouded over. We must be in Belgium by now. Yes, definitely Belgium. The houses and especially the roofs are totally different. It’s amazing how much you can tell about where you are in Europe based on architecture alone.
And now not only does it feel like Belgium, but we’re slowing down, so it must be almost Brussels. And if it’s Brussels, it must be Saturday. (Old insider’s joke). Then comes confirmation over the loudspeaker, first in French, then in Flemish, then in English. It’s 11:45, which places Brussels only an hour and 20 minutes away from Paris. Very handy if you’re French and work for the European Union. Some people make that long a commute from the Paris suburbs to their jobs in town!
The Brussels South station is dreary but functional; I’ve gotten off here many times. But this time I’m headed through. The staff changes and the chic navy blue uniforms give way to more militarily-tailored dark grey and burgundy. The "hostesses" are sweet as can be and one chides me for having left my purse in the seat across the aisle, as a grandmother would do, even though she’s half my age. True, thieves love to travel the trains and steal things and pick pockets - the profits are well worth their investment in a train ticket. 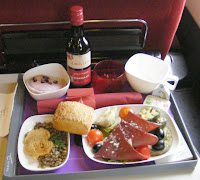 The train crawls through town. And until Antwerp it continues to dawdle at a more traditional speed. The old rails under us make that familiar ka-CHUNG-ka-CHUNG sound as we roll over the points. They haven’t been modernized on this stretch yet. Very soon, a lovely lady comes by with another meal trolley and serves us up chicken-or-eggs... all cold, all very Flemish, with mustard sauce, but so artistically arranged, and served with such a warm smile. (On the way back to Paris the choices are "vegetarian-or-meat" - in this case wonderful cured ham.)
After Antwerp (12:30), the continuously welded rails start up again and the train is back to its 300 km/hr race, but only for a short time. We sail across flat country with a backdrop of industry and more modern windmills. When we enter the Rhine delta, with water everywhere, we’re already into Holland. Another few minutes and at 1:00 we pull into Rotterdam, having passed a huge mosque with two minarets. Both Antwerp and Rotterdam were badly bombed in World War II - especially Rotterdam which was bombed to the ground - so both are quite functional and relatively modern, at least the part visible from the train. Announcements since Brussels have been in Flemish first, then French and finally English. But most everyone in Amsterdam speaks English, as it’s taught as of early grade school. And the person I’m off to visit was born and raised in France, so understanding and being understood won’t be a problem.
Before reaching Amsterdam, I decide a pit stop is a good idea. The premises are rather small, and I seem to have butt-dialed the motion-operated faucet with my elbow while closing the door.
The train rolls on slowly now, through long tunnels, past soccer games and bicycles, over pocket-sized green fields, with more and more hothouses stretching far out on either side. Definitely Holland, green grocer to much of Europe.
One final stop at Schiphol Airport - how civilized that the train should pull in right underneath the terminals! And finally a few minutes later, we pull into Amsterdam Centraal station, and the wonderful smiles of my hosts. European train travel is a true pleasure.

(.order reverse in read ,trip return the For)

﻿
Addenda for those who are curious about this sort of thing:
- The service personnel changes in Brussels; don’t know about the actual conductor. The "stewardess" between Brussels and Paris (can’t say flight staff because we never took off, in spite of the speed) works this leg of the trip five times a week, sometimes multiple times a day. Sometimes the hostessing is done by French staff working for the SNCF; sometimes it’s their counterparts wearing Flemish colors.
- Now that borders are a thing of the past in the European Union, the only way I could determine the moment we’re back on French soil is that my cell phone started chirping at me. As I don’t have roaming service, calls don’t arrive outside of France. And the poor little thing just wanted to let me know that it had still been working while I was having a fine old time in Amsterdam. And now I have a whole backlog of calls to go through!