Out and about: Exhibits: Degas et le Nu 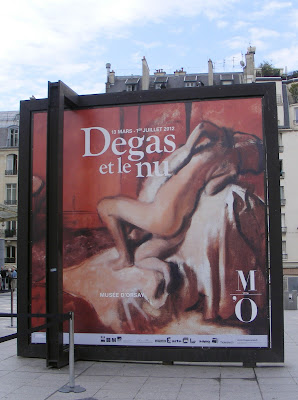 When I’m in the States and thinking of Paris, I tell myself "Next time I’ll be out every morning, doing things, taking pictures, visiting museums, seeing movies..." And then when I arrive, I somehow get caught up in everyday details and the days slip through my fingers.
Paperwork is partially to blame. And cooking and maintenance on the apartment. And this time the bloody incessant rain! Now there’s only a week left and I’m trying to cram it all in before I leave.
So I’ve given a lot of thought to setting priorities. Which is why I hopped on the métro to the Musée d’Orsay this morning, before the rest of the Things To Do started getting done. 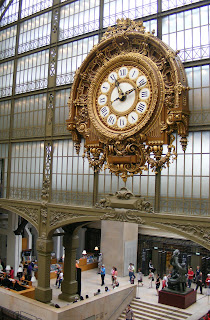 This museum had a previous life as a theater and an auction house and a movie set, including for Orson Welles. But even before that it was a train station and there’s still an RER commuter line running right underfoot. You can feel it rumbling and kachunk-kachunking over the points at regular intervals as you walk through this marvel of an architectural re-make. (If you go, be sure to check out the Belle Epoque ballroom and the still-functioning bronzed-and-mirrored restaurant up behind that huge clock.)
But back to the reason I’m here.
Edgar Degas (actually De Gas) was born into the Parisian bourgeoisie in 1834 and earmarked to be something other than an artist. So much for his parents’ expectations. I thought I knew a lot about Degas, but I didn’t. For instance, his mother was from New Orleans and there is some lip service to the idea that his Scène de guerre au Moyen Age (War scene from the Middle Ages) is based on tales he heard of the rape of New Orleans women during America’s Civil War. An entire room is dedicated to this piece and some of the numerous sketches he made for it. All reflect his concern with portraying the naked body and his fascination with its contortions, which became his speciality.
The show is very different from what I’d expected. Degas is remembered chiefly for his paintings of ballet dancers and race tracks. But his classical training instilled in him a fascination with the human body, which implies naked. He carried on this fascination throughout his career, and this show is all about that.

At the entrance to each of the seven rooms there are panels in three languages explaining the theme covered. Displayed are more sketches than anything else, and explanations (in small print) for almost every sketch. I noticed a majority of those sketches are from American museums, with the rest from private collections but most of the major works come from the walls and reserves of the Musée d’Orsay itself.

One entire room spotlights his ballet dancer statues, or rather stages of his statues. Half of them are original wax figures found in his studio after his death, some unfinished. The other half are bronzes cast posthumously from original wax models. All are nudes. While his ballet dancers ended up clothed, there are numerous sketches and studies of them, minus their tutus, on the surrounding walls.
Degas’ philosophy was to do a scene again and again, often from different angles but also focusing more on a different detail. This is very obvious in what could be called the bather scenes. That makes up most of the exhibit and stretches over several rooms. One detail that appears again and again is the metal tub used for bathing in the old days. (I remember one my grandmother had at her summer cottage at The Shore where I took baths as a child in the middle of the kitchen.) The tub is the link (along with the newly-invented bidet) between a set of small sketches and pastels Degas probably made in the brothels of 19th century Paris and the later works of more respectable bathers. It’s in these later pastels that the contorted poses of the models and the artist’s visible strokes are most obvious.
As with most art exhibits nowadays, the lighting is low, both for dramatic effect and to focus attention. At one point, the lights accidentally go out and there’s a brief moment until the emergency lights switch on. They obviously don’t include spotlights on individual works. Everyone seems confused. And then a few short moments later the problem is fixed and the "right lights" go back on. There’s an audible "ahhhhhh" that ripples from room to room. And that leads to some giggles as well.
Another facet of the show is underlining the connection between Degas and other painters of the period. Especially Renoir, for the colors used to depict the voluptuousness of feminine flesh. Like other painters of the period, Renoir depicted his flesh outdoors while Degas innovated by placing his women in their natural indoors habitat - a fact that goes hand-in-hand with Zola’s literary naturalism of the same era.
The show ends in one of the old reception rooms, with its high, ornate ceilings. It closes by making a link between Degas and the upcoming generation. There’s a canvas by Toulouse Lautrec (in fact, there are a few others through the exhibit, if you look carefully) and another by Gauguin, both of whom studied Degas’ art carefully, and each of whom took part of it and carried it forward into their own works.
It’s a fascinating show, but perhaps not for those who need the Big Bang Factor. It’s more of a quiet walk through the developing genius of Degas, step by step. And a lot is learned while stepping. 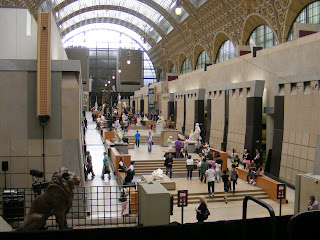