Out and About: Exhibits: The twilight of the Pharaohs 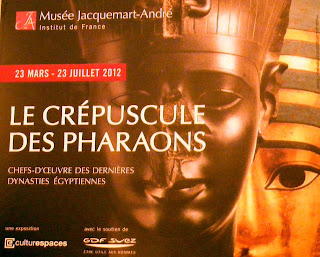 In grade school, you’re introduced to the ancient cultures. Working backwards, I always found Rome boring. Too regimented, too military. Ancient Greece was interesting in an intellectual way. But before either of these there was Ancient Egypt.
With Egypt, my mind would wander among the pyramids, the temples, the mummies and sarcophagi and hieroglyphs. Egypt left room for the imagination to soar, like Horus, the falcon god.
I’m sure if I’d lived back then, I’d have hated it. Arid and hot, with the occasional asp. Yet in my mind, I was Nefertiti or Nefertari or Hatshepsut. But never Cleopatra (see asp above).
So when I found out that the Musée Jacquemart-André was hosting an exhibit called Le Crépuscule des Pharaons - The Twilight of the Pharaohs - I just had to go.

Jacquemart-André isn’t a large museum. It was once a private mansion and the main floor remains as it was when the owners bequeathed it as a museum, with the original furnishings and decoration still resplendent. Which means that temporary exhibits stretch over only six or seven rooms on the upper floor, the perfect size for someone who’s just about all museum-ed out.

The Twilight of the Pharaohs covers the final millennium of the rulers of ancient Egypt. One thousand years! That’s hard to get your mind around.
And I knew very little about this period that stretches from the death of Ramses XI in 1070 B.C. to the takeover by Rome in 30 B.C. All I knew was Ptolemy and Cleopatra. It appears that during that millennium, Egypt was overrun by different cultures - Libyan, Nubian, Assyrian, Persian - and there were periodic break-ups between Upper and Lower Egypt. Scattered in between were periods of stability but they didn’t last long.
Yet in spite of that, prodigious works of art were created. And in this exhibit, the Jaquemart-André has over 100 pieces on loan from the leading collections of Egyptian antiquities worldwide.
I learned that there are differences from one period to another, and that was especially obvious in the sculpted heads. One red granite face had the same enigmatic smile as the Mona Lisa... 2000 years ahead of Leonardo da Vinci. Another looked like Gauguin might have carved it in Tahiti. The full-length figures were a bit more staid and rigid, but then again, maybe that’s because they all came from the same dynasty. 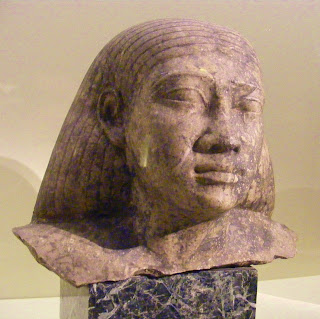 Something I’ve always found interesting is that Egyptian sculptures of human faces seem devoid of feeling (although they do vary from realistic to idealistic) and full body sculptures seem frozen. But Egyptian sculptors depicted animals in a more lifelike fashion, as if they’d just paused in their animal doings. Could that be because the personages sculpted were often pharaohs, and thus the representatives of God on Earth? That merits a bit of respect, I guess. But it also explains why my favorite pieces were near the end: the baboon, the cat, the ibis... and Horus, of course. Among my favorite gods is the sometimes-ugly-but-always-bearded dwarf Bes although I’ve never figured out why this war god would also be the protector of women and children. There was a carving of Bes in the exhibit somewhere.

One room - appropriately a dead-end - stages the inside of a tomb. It holds two of the sarcophagi of the priest Ankhemmaat, along with his funeral mask and other objects. Totally dark, the room uses spotlights theatrically to bring out the glint of the gold decoration. There are also 78 lapis lazuli "ushabti" statuettes, all standing in a row, waiting to serve their master in the after-life. (Ideally a tomb should have 365, one for each day. Union rules.)

After touring the Egyptian exhibit, you might want to take a look at the furnishings on the ground floor. Or enjoy a cup of tea or coffee in the café, accompanied by a pâtisserie. At lunch time, the menu includes salads, a selection of quiches or the blue plate special (as we used to say for the dish of the day). The café is located in the old dining room, so you can look out the window at the garden and imagine yourself back in the 19th century, sitting down with the Jacquemart-André family.
Or, your head filled with ancient Egyptian beauty, you could try to project yourself back to the time of the pharaohs! 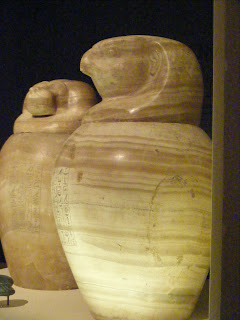 The twilight of the pharaohs
through July 23, 2012

Open daily 10 to 6
Mondays and Saturdays until 9 pm