Out and About: Exhibits: Artemisia Gentileschi 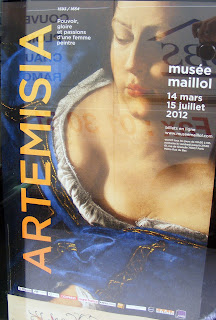 One thing leads to another and you find yourself with yet another museum to visit.
I saw the movie Artemisia at my neighborhood Studio 28 movie theater (see Feb 6, 2012), mainly on the strength of Michel Serrault acting in it. As the name Artemisia didn’t ring any bells, I didn’t know going into it whether she was a historic person or a fictional character. It proved a fascinating movie. Part costume piece (set in the 17th century), part love story bordering on soft porn almost... well, let’s say maybe just a realistic, artistic European view of the amorous habits of the time. Marvelous lighting, rich costumes, excellent acting, suspense... the movie had a lot going for it. Only when the end came and the explanatory titles ran did I find out that Artemisia had really existed and she really was an artistic genius, the first woman artist in Europe and quite the liberated woman.
A few days later I met a friend at the Musée de Luxembourg to see an exhibit called Cima de Conegliano, Master of the Venetian Renaissance. I can’t remember why, but the name of Artemisia came up. My friend told me that there was an exhibit of her works at another of the Parisian museums right now.
Being the curious type, and having some time while my daughter took a jet-lag recovery nap after her arrival today, I looked it up. It was on my métro line just on the Left Bank at the Musée Maillol. So I decided to go take a peek and broaden my horizons.  Broader horizons are always a good thing.

I don’t know nearly enough about Italian Renaissance painting, except that it’s basically divided up into Biblical subjects and portraits of the Rich and Famous, given that it was the Church (especially the Pope) on the one hand and the self-same Rich and Famous on the other who commissioned almost all of the art of that era in Italy.
Artemisia Gentileschi was born in Rome in 1593 to the illustrious painter, Orazio Gentileschi. She learned her craft by watching him, helping him, posing for him and finally nagging him into teaching her all he knew. A gifted student who painted her first canvas at age 17, she then took her skills on to a whole other level. At a mere 19 years of age, she left her family for Florence and the court of the Medicis, where she painted her first masterpieces. (This was after the rape/love affair related in the movie.) Later Artemisia moved back to Rome, then on to Venice, Naples and even the court of King Charles I in London. Somewhere in there she managed to pick up a husband and four children, but I don’t know if she dragged them with her in her travels. She died in Naples in 1654.
After remaining the darling of all the crowned heads of Europe well after her death and into the 18th century, Artemisia’s works fell out of fashion, as did those of many other great painters of the time. Even Caravaggio. Until Roberto Longhi rediscovered her and wrote about both Gentileschis, father and daughter, in 1916. Now Artemisia seems to be having a rebirth, with exhibits traveling around the globe.

This is a smallish show - about the same size as The Twilight of the Pharaohs - divided up between two levels. Interestingly, a good part of the canvases come from private collections. The explanatory panels are only in French, but there are brochures of those same texts in English and a few other languages available at the entrance.
For something entirely different, walk through the rest of the museum. There is usually a second show by other artists on another level. And there are sketches and statues by the Maillol that the museum is named after. If you’ve ever walked through the Tuileries Gardens by the Louvre, you’ll probably have noticed one of the 18 nude bronze ladies of Aristide Maillol. They’re here and there, standing, reclining, sitting... all voluptuous, all woman.

Artemisia:  Power, glory and
passions of a woman painter
through July 15, 2012 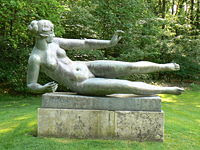