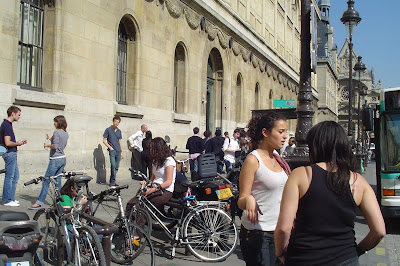 Monday at 8 a.m. continental European time, students all over France - 703,000 of them, all seniors - sat down, fear in their stomachs, ideas swirling in their heads, palms wet, mouths dry, for an exam that will determine a great deal of their future.
What am I talking about?
The bac philo.

If you speak French, let me specify that by bac, I don’t mean a ferry boat. If you know anything about French culture, you’ll probably have guessed that.
In the final year of high school, all students undergo a rigorous round of exams to see if they’re worthy of a diploma. They are tested in all subjects except French, which they will have been tested in already at the end of the previous year.
And when I say "test", I do not mean true-or-false or multiple choice questions. The bac is all about essays. And it lasts four hours.
Not only that, but as with all things French, there is a right and a wrong way to do it. I found that out at my expense when I wrote my first essay at the Sorbonne. In America, I was taught to write with links from one paragraph to the next, each opening with words such as "In addition..." or "However, ..." or "On the other hand, ...", back and forth on both sides of the topic. And I got quite good grades doing it. But my professor in Paris said that was "journalese" and therefore unworthy. Brrrrpppp, thank you for playing, this way out.
What you’re supposed to do is start with an introduction and then proceed with thèse / antithèse / synthèse. Or in plain English, you run down all the points in favor of what you introduced, then all the points against what you introduced, then you pull it all together into a conclusion.
And then comes what I call The Quaint French Part: vous ouvrez une fenêtre (you open a window). Translation: you say something, often in question form, that some other poor slob can then use as the introduction to a whole new thèse / antithèse / synthèse.
And when you’ve learned to do that well, you’ll be as French as they come!

But back to the bac philo.
High school in France has different educational tracks. They’ve changed over the years but are now literary (L), scientific (S) and economic/social (ES). Depending on what you want to do in life, you specialize in one of them. You cannot become a doctor with a bac L, but you could become a teacher with any of the three. It’s somewhat like doing pre-med or pre-law as of high school.
Depending on which type of student you are - L, S or ES - the questions differ but you have to choose one of two subjects, and finish by dissecting a text that the exam board has chosen. Those questions are short on words but long on the thought required to answer. Here are the questions for this year’s bac philo.

Scientific (S):
Would we be more free without the State? (Serions-nous plus libres sans l’Etat?)or
Do we have a duty to search for truth? (Avons-nous le devoir de chercher la vérité?)
And the text is taken from Rousseau’s Emile

Economic and social (ES):
Is it possible for natural desires to exist? (Peut-il exister des désirs naturels?)
or
Is working merely being useful? (Travailler, est-ce seulement être utile?)
With a text by the philosopher Berkeley.

You’re graded on a scale of 0 to 20. I was told upon entering the Sorbonne that 20 is for God and 19 is for the professor, so the most you could possibly hope for would be 18 (and between you and me, there are bloody few of them handed out). You’ll need to get at least 10 to pass.
But the torture doesn’t end there. Depending on the track you’re on - the old L, S or ES - your grade will be multiplied by a coefficient when recorded in your total points toward graduation. Scientists don’t really need philosophy; it would only hamper them in toying with genetic engineering or building a better bomb, so your grade will be multiplied by a coefficient of a mere 3. Philosophy is deemed more important to those specializing in economics or anything societal, but only minimally so, and therefore their grade will be multiplied by 4. But philosophy is an integral part of a literary person’s training, n’est-ce pas? As a matter of fact, for the literati, philosophy is the most important subject with the highest coefficient: a whomping 7! So if you don’t do well on this exam, you’d have to excel in all your other subjects to pass your bac.

And that, dear readers, is why there has been cheating... and on a very high level. Last year the subjects were stolen by a few enterprising people who then sold them to students so they knew what to study beforehand.
This year there’s no chance of that. The forms with the questions on them are wrapped in three different plastic films. Count ‘em. Three. They were shipped by truck out to the test centers with an escort vehicle to make sure no one hijacked them en route. At 7:50 a.m. the forms are taken out of the safes in which they reposed overnight... under guard. Students are not allowed to bring any documents into the test room, or any briefcases or backpacks or even fanny packs. No cell phones. No iPads. No nothing. Just your ID. Your pens. Yourselves. Period.

And now it’s the big day. You’ve been milling around outside the school for up to an hour, talking to your friends. Asking a few last questions.
The doors open. You file in, wishing each other luck.
It’s 8 am.
Drivers, start your engines.

I forgot one important point:  the "why" of it all.  Why do the French feel it's important to put their children through this trial by fire?
Here are some comments made on TV Monday morning by those who rule over such things:
- It's important to be able to put some distance between your reasoning and your opinions.
- People need to hone the critical thinking that it necessary to democracy.
- Philosophy is the love of wisdom.
And who could argue with any of that?  After all, the bac has been going on since Napoleon created it by decree in 1808!