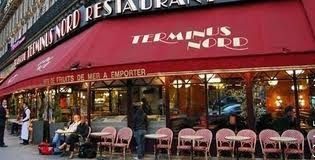 I met Fran when I lived at my old apartment. She was friends with the British neighbors two flights down, who had a wonky heater. So anyone who stayed at their apartment in their absence was instructed to go see Sandy to get it working. Among others, Fran knocked on my door.
That was about 30 years - and two apartments - ago.

I’ve just seen her off at the Gare du Nord     She arrived from London for a two-day stay, which involved a ballet at the Palais Garnier. And a final dinner right across from the train station so she could enjoy her meal instead of looking at her watch every two seconds.
We walked to the restaurant to work up an appetite. As we waited to be seated, a man strode past us and stood truculently before the maître d’hôtel who looked up and said, "Bonjour, Monsieur."
Monsieur stood there, mute.
"Bonjour, Monsieur," the maître-d repeated, with a little more emphasis. The man nodded.
"You spik Frenshe?" the maître-d asked, raising his eyebrows.
"Bonsoir," Monsieur responded, icily. "At this time of day you say bonsoir."
The maître-d looked flummoxed.
"A table for two," Monsieur added.
"A table for two for us as well," I piped up, with the most elegant but firm voice I could muster. "We were here before you," I added frostily, staring into Monsieur’s soul.
"Ah! Eh bien..." said the maître-d, relieved to be able to stick it to Monsieur. "Follow me." He smiled at us broadly as soon as we had covered sufficient territory. 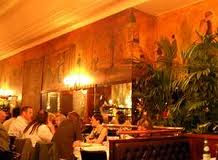 ﻿     The Terminus Nord is a brasserie, which means they serve food at any time of the day, as opposed to restaurants, which serve during lunch and dinner hours only. It’s right across from the Gare du Nord which launches trains to destinations north of Paris: Belgium, Holland and England... and in Fran’s case the Eurostar high-speed train from Paris to London. The brasserie has been there since 1925, and its décor makes you expect to see Zelda and F. Scott Fitzgerald charleston through the door at any moment, even though this wasn’t their part of town.
We had two hours to spend before Fran’s train. And not only did the food prove excellent but our fellow diners lived up to the French saying, le spectacle est dans la salle. The show was all around us. All the stock characters were there: the British traveler, the lovers, the French businessman...
First came the English gentleman - probably a businessman - at the next table, reading a paperback by Philip Roth while trying to pick apart whole crayfish. After a moment, he turned to Fran and asked her if she’d mind, nodding at his briefcase. She politely nodded back. Upon which he got up and walked away, probably to the Men’s.
"I thought he meant did I mind his briefcase being next to me," she laughed, as only Fran can laugh. "But he meant would I mind his stuff!" 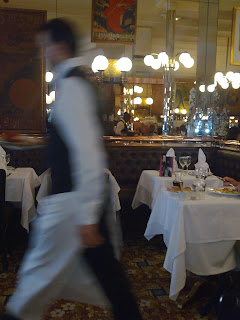 And then there was the more-than-a-midlife-crisis couple. I was at a disadvantage here because Fran had the good seat to enjoy the show. I turned to see that She had stood up from the table and taken a few steps, then pivoted and struck a pose as if waiting for the spotlight to capture her. I half expected to hear her say, "I’m ready for my close-up, Mr. DeMille." She held the pose for a few seconds, then slunk back to the table, hips a-sway, plunked herself down on the bench next to Him and proceeded to suck his lips off. He didn’t seem to mind. Upon which their huge seafood platter arrived and she jumped up and counted the oysters, slowly and methodically. Twice! I guess she wanted her money’s worth. Or his. And then She called over the waiter! They huddled. More oysters arrived. Big night in perspective is all I could think.
As Fran and I were almost ready to leave, our delicious meal now done, a 20-something Frenchman sat down at the table next to ours. He looked like just an ordinary young French businessman, thin, trendily-dressed, busy pecking relentlessly on his Blackberry, fingers a-blur, as if it were his last link to humanity. No Philip Roth novel for him! His meal arrived, a steak so rare that Fran quipped, "My uncle would have said a good vet could have that up and running around in a minute". And then French Business Guy proceeded to do the unthinkable. He washed down his steak with... Coca-Cola! And Diet Coke to boot! In all my years in France, I’d never seen a Frenchman do that. Why, you can have your French nationality revoked for that! And there we were, the American and the Australo-Brit, having polished off a bottle of St. Joseph between us. National stereotypes be damned. 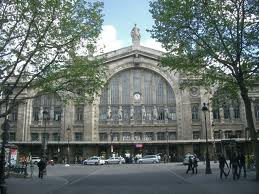 Full beyond all hope with good things that would turn the stomach of many an Anglo-Saxon - steak tartare for Fran (which is basically uncooked ground beef) and grilled foie gras for me - Fran consulted her watch. And it’s a good thing she did. It was 10 minutes to check-in time. Lucky all we had to do was cross the street.
As we waited for our coats, curiosity won out and I asked the bartender if the restaurant’s decorated plates were for sale. (I have two from another favorite restaurant, Le Trumilo.) He said they weren’t, but that he knew La Coupole and other such restaurants sometimes sold theirs. And promptly walked off to serve the champagne he had just poured. On his way back to the bar, he plunked down two plates, still warm from the dishwasher, and kept right on going without so much as a look in my direction. Surprised, I watched him move off... then put the plates in my carry bag.
On his way by again, he asked, "Did you get them?"
I said yes, winked, and handed him a 10 euro note. He pocketed it and winked back. This is what my friend Jan would call flirting with the wait staff. I just say it’s the way things work in France. 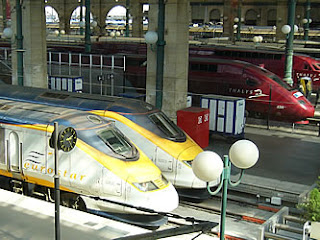 I escorted Fran as far as the Eurostar security checkpoint, gave her a kiss and a hug and waved good-bye. Then set off walking back uphill. I was home before Fran’s train even left the station.
And put the two plates away, smiling.