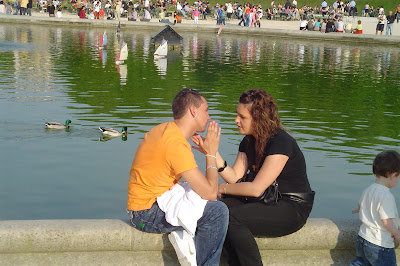 I decided, as it was Valentine’s Day, I should write something about love and Paris - the City of Love - and the whole tradition of love. So I looked into who Valentine was.
And I didn’t come up with some Tristan-and-Isolde or Héloise-and-Abelard moment. No.
Instead I came up with some claptrap about there being three Saint Valentines on a list drawn up in 496 by Pope Gelasius I and no one knows which one is the one this Day for Lovers was named after. None of them - martyrs all - seem a likely candidate to me. Nor do any of the four others mentioned since then.

As for the date, in ancient times February 14th was the festival of Lupercus, the goatskin-clad Roman god of fertility. After drinking lots of wine, his priests would run half-naked through the streets, feeling up all the women who were told it was to make them fertile. Sounds like a plan. (Also sounds a bit like modern Rome.)
That pagan feast seems to tie in neatly with one of the emblems of Valentine’s Day: Cupid, son of Venus and the god of desire, affection and erotic love in Roman mythology... which gives everyone a shot at the kind of love they’re interested in. And that’s about as far as you can get from the Roman Catholic Church and its martyred saints. 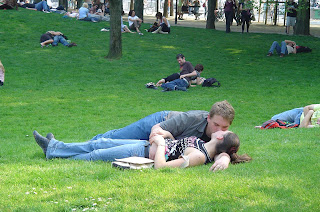 Instead, Valentine’s Day seems to be a figment of someone’s imagination. The most often-mentioned suspect - and the earliest one - is Geoffrey Chaucer in his Parliament of Foules. He links the date with the period when medieval Europeans said birds paired off for mating purposes, some for a season, some for life. 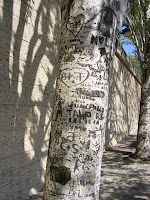 Whatever the origin, Valentine’s Day has become the day of lovers - at least in my lifetime. I remember cutting hearts out of red construction paper and gluing them messily onto lace doilies, way back in kindergarten. At first those valentines were for your parents. Then you started exchanging them in grade school, and tallied up who got the most to find out who was the most popular kid in class. Junior high students scoffed at Valentine’s Day... and just about anything else at that age. High school sometimes brought Friday night dances in smelly gymnasiums fitted out with hearts hanging from the rafters along with a shimmering dance ball rotating slowly above. Oh yes, and pink lemonade punch red-ed up with some food coloring. 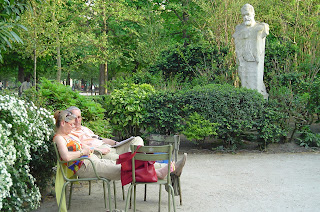 Now that we’re adults, we’ve honed our Valentine skills. Flowers. Chocolates (Valrhona, for instance). Champagne (something France does well). It’s a day for lovers. And I realized I had quite a few photos of That Sort of Thing, taken on warmer days than those France has just lived through. So I’ve posted them here for you - ah, l’amour! - and hope they bring you a bit of love à la française. 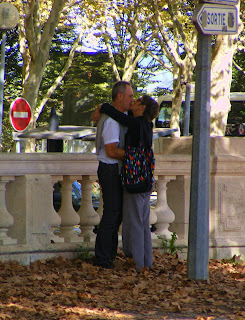 May you all have a very romantic Valentine’s Day.


P.S. There’s a map somewhere on the French Internet that shows where you can find your unrequited love in Paris. You enter your desiderata - age, sex, other - and it will tell you where to find someone of similar inclinations.
Ah, these French. So linked up.