Out and about: En attendant Sempé

﻿ ﻿ If some of his drawings look familiar to you, you who have never in your life picked up a magazine in French, that may be because Sempé’s drawings graced many a New Yorker cover... something he was very proud of. 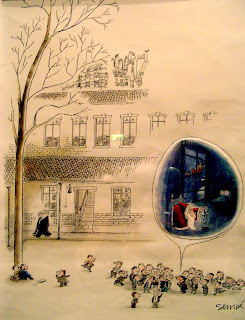 Born in Bordeaux in 1932, Jean-Jacques Sempé did everything his own way. The illegitimate son of a salesman with an uncontrolled temper and no talent for paying bills, his childhood was far from happy. World War II didn’t help, forcing him into exile in the Pyrenees where he couldn’t go to school for two years.  Which made it easier for him to drop out at age 14 to become a salesman-on-a-bike peddling powdered toothpaste.
Luckily for us, all this must have taught him to look for the humor in the world around him because that is what his art is based on: the little detail, the person in the crowd... and a certain loneliness. It definitely gave him subject matter for his young "Petit Nicolas", who became the hero of a series of books he illustrated, with René Goscinny (of Astérix fame) writing the text. 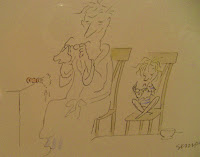 And then there’s Catherine Certitude (Cathy Certainty), a mistress of a dance school, who daydreams about her childhood alone with her salesman father. Her childhood seems happier than Sempé’s though.
But before them both came Monsieur Lambert, sketched in the typically French setting of the café-bistro where talk skips from politics to sport to food, but always seems to return to women and love. 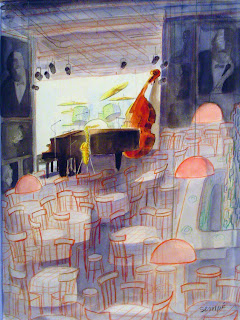 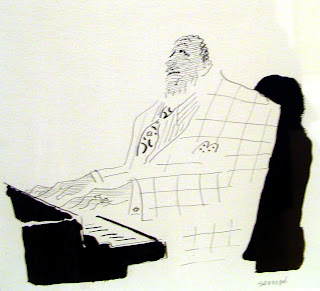 Sempé has always been wild about jazz (especially Charlie Parker, it seems). "Like jazz, art is suggesting," he once said. And in his "suggestions" of jazz, he always suggests tenderly, with respect. 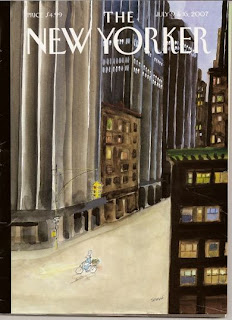 That love of jazz, and detective stories à la Dashiell Hammett, drew him to New York in 1965. But his lack of English kept him from staying. Still, he returned often, riding his bike (another passion) through the streets of the city. He said it allowed him to observe better. As of 1978, his talents caught the eye of the New Yorker and he was assigned an office whenever he was in town. He loved the magazine for its blend of sophistication and impertinent humor and its accent on the visual. Result? 101 covers and many, many more "cartoons" on inside pages.

The exhibit "A Little Paris, and Elsewhere" covers all this. It starts on the mezzanine with a few pages of his biography and some early drawings. But the real mother lode is on the main floor, with a maze of his drawings, many previously unpublished. The day I went, there were several classes of different ages taking advantage of the "treasure hunt" visit the exhibition organized during the school holidays. This seems to be a "must" for French exhibits nowadays (see the prehistoric exhibit at the end of the Jan. 30 posting). It was fun to see children counting the cats in one section while others tried to spot a certain character in a character-filled drawing, a French version of "Where’s Waldo".
The teenagers, all dressed in black, seemed to be age-appropriately bored with it all. They’ll only realize what they’ve missed when they’re much older.


And it’s free! As are all of City Hall’s exhibits. Which are getting more and more interesting and culturally accessible. Whoever is now holding the Exhibit Curator job certainly has it down pat.