Out and About: Exhibits: Les Masques de jade mayas 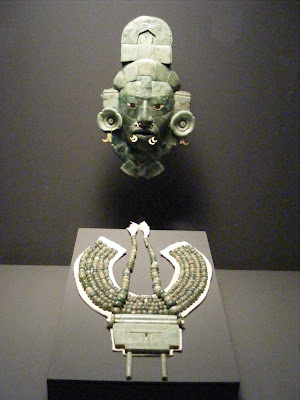 The French love their museums. They’ll turn anything into a museum: the house of a famous painter or writer, an old train station, buildings left over from World Exhibitions... and now ex-offices.
One of the latest museums is called the Pinacothèque de Paris. That strange word may sound like discothèque, but don’t expect any dance music. When you walk through the doors, you’d think you were in an office lobby - which it once was. Opened in June of 2007, it was the first private museum in Paris and quickly made a name for itself with amazing exhibits widely publicized in the media. So much so that in January 2011, a second venue opened kitty-corner to the first. And now the ground floor and even basement levels of these two corner buildings just off the Place de la Madeleine have been given over to art exhibits.

﻿
Why the word pinacothèque was chosen I can’t tell you. It comes from the Greek term pinakothêkê and means a room that contains a collection of paintings. I suspect it was just to get people talking... which they did. And with the media blitz that surrounds it, many of the shows have brought in the crowds: 4,000 visitors per day, 2 million in the first three years. One of those first shows spotlighted some of the Xi’an Warriors, those clay statues discovered by the hundreds in an ancient Chinese grave. There was also a show of Dutch 17th-century masters, many from Amsterdam’s Rijksmuseum (presently being restored) and another on Jackson Pollock, for which insurance costs were phenomenal.
The man behind this miracle is an art historian, Marc Restellini, 48, grandson of a Moldavian painter and an expert on Modigliani. A man of deep pockets (other people’s, but maybe now his own), he held his first show at age 22.. Not a huge financial success but it put him in contact with some rich Japanese... and off he flew for 10 years to set up art exhibits in Japan. He’s also been the art director of the Musée du Luxembourg in Paris.
All of France criticizes Restellini for his "sense of merchandising", an unpardonable sin in French cultural circles. But maybe he’s not liked because he didn’t bother to take the official - and up to then morally compulsory - French museum curator’s examination. The only person ever to brave the system, he’s been successful beyond all expectations. Of course it doesn’t hurt to have friends in high places, such as the French President. In short, Restellini is a cultural entrepreneur, borrowing from museums and private collectors alike. And he knows who to bring on-board to ensure the word will get out. His usual suspects are the weekly magazine Paris Match and the French radio station specializing in news, France Info. France’s largest bookseller, FNAC, is also a recurring partner and that brings in lots of additional visitors because FNAC also provides some museums - including the Pinacoth que - with Ticketmaster-type services.
In addition to all that, Restellini is very savvy in what people want. And he knows that when they see an exhibition they like, they want to take it home with them. Which is why he’s set up his own editing venture, putting out catalogues and DVDs for every show since the day the Pinacothèque opened. Slick four-color catalogues plus DVDs playable on every international TV standard. As well as postcards for those who don’t want to spend that much or carry a heavy catalogue home. (He also provides press packets for journalists, right there at the exhibit, instead of saying "it’s on the internet". Smart man.)﻿﻿﻿
﻿

What brought me to the Pinacothèque on this particular occasion was an exhibit called Les masques de jade mayas - The Jade Masks of the Mayas. You might remember another exhibit of Maya artifacts I covered in the fall (see September 15, 2011.) This one is far smaller and more focused on this one aspect of the Maya culture: the funerary masks. Like the Egyptians recreating an eternal home for their rulers inside the Pyramids, the Maya fashioned mosaic masks out of jade to ensure eternal life for the most prestigious chiefs of what we call the lost cities of the Mayas: Chichén Itza, Palenque, Tonina and others. 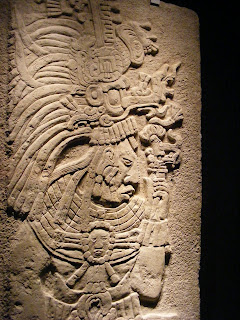 The Maya civilization began around 2000 B.C. and lasted until 900 A.D., which is quite a run! Centered in the Yucatan Peninsula and into Chiapas and even Honduras, Belize, Guatemala and El Salvador, the Mayans excelled at astronomy, mathematics, architecture and the arts. They developed an elaborate system of writing, again similar to the Egyptians in the use of glyphs. This system may have been a necessity in order to govern because unlike the centralized Inca government, the Maya civilization was made up of independent city-states, somewhat like Ancient Greece. All these aspects are highlighted in the exhibit. 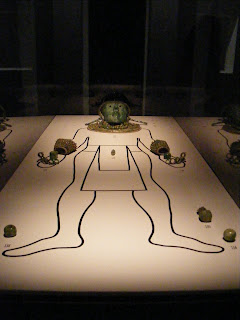 The pièce de résistance lies in the masks themselves. To the Maya, jade was the most rare and precious of all materials. Artists used jade shards to create mosaics, and the juxtaposition of the different shades of green makes the faces more lifelike. Some masks depicted the gods, especially the corn god, whose bounty surely saved them from starvation many times over the centuries. Such masks were worn during rituals.
But funerary masks were designed to depict the ruling class, such as King Palak. Rulers were buried not only with the masks over their faces, but also in full apparel. And so archeologists also uncovered necklaces, earrings, pectorals, and bracelets as well as clay offerings to the dead kings. Seven tombs are represented at the Pinacothèque exhibit. And they make you rethink the ideas you may have of this "primitive" world". 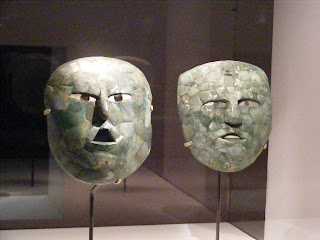 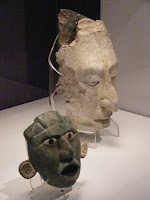 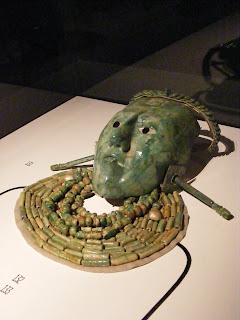