Now that the snow has melted - just barely - and we won’t fall on our butts getting down the hill or back up, let me take you grocery shopping. Because there’s bloody little "fresh" left in the house to eat after days of hibernation. 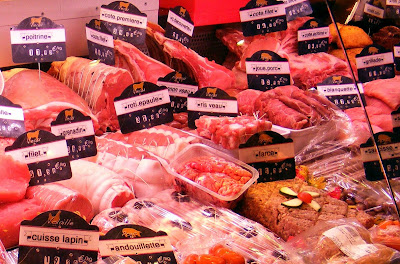 First, a stop by the butcher’s. To go with those delicious prunes Aviva left behind after The Project (see Jan. 22, 2012), let’s buy two joues de porc (literally pig’s cheeks). The butcher asks if I want a left or a right. Butcher’s joke. The braised pork with prunes in a wine sauce will taste great over some rice. And for another day, let’s cook up a specialty of my Pennsylvania Dutch grandmother: a stew with vegetables and smoked sausage. For that we’ll need a saucisse de Montbéliard. Our total comes to 6€35 for the two humanely-raised, no-antibiotics, no-growth-hormones meats. The joue, a cheaper cut, will take a while to cook - two hours - but who cares? Indoors it’s warm and there’s a good book to read curled up on the couch under a cozy throw. And the whole house will smell great. (Sometimes people from my building come down to ask what I’m cooking, and sometimes I end up with impromptu guests.) 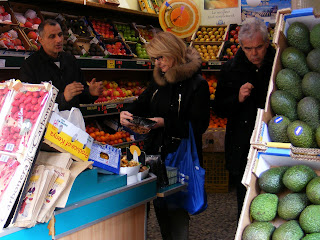 Now we’ll need some vegetables to go with the sausage. There are still some potatoes left and onions, but no carrots. The green grocer asks if I want the "table" carrots or the carottes de sable (sand carrots), which he says are more sweet, so let’s try the sandy ones. (After all, my name is Sandy). The stock of garlic is running low in the kitchen, so let’s get another head. And two leeks, already semi-prepared with the green ends cut off, leaving only the blanc de poireaux, which means less work, less cleaning especially. And five clémentines for some Vitamin C, cheerful color and low-cal sweetness. Total: 6€79 for enough fruit and veggies to last several meals, including leftovers. 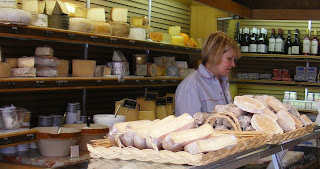 Next, a stop at the cheese shop. As this week-end has a Road Trip scheduled to see some Celtic treasures from 500 B.C., just one cheese I think. The cheese board - three cheese minimum - will have to wait until next week. They all look good, but let’s take something that enjoys a good baguette, rather than a stand-alone hard cheese. Attracted by the zing of its pepper crust on a cold day, let’s opt for a good slice of Brie au poivre at 2€70. 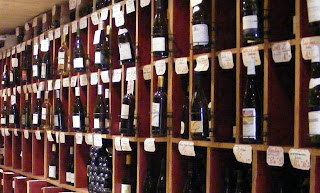 And to go with cheese, you obviously need wine. A quick stop into the Caves des Abbesses to see what Emmanuel is pushing today. He recommends an organic merlot from the Languedoc region, which is a bargain at 4€60. I inquire after his father, Serge, who is now retired and living in Normandy and who was my purveyor of wines for many, many years. Manu smiles and says that the cold has at least kept him out of the vegetable garden, so he’s playing with his grandson indoors, which is a relief to Mme. Serge. 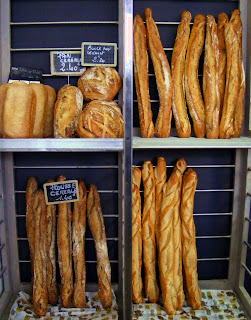 After the slog up the steep but ice-free street, the last stop: Christophe’s boulangerie, where we pick up a baguette - the Parisse for 1€10. There’s a slightly cheaper generic version, but this is the old-style one, made using a more traditional recipe with different flour, and that makes for a crisper crust and a richer interior. Which the flavorful brie will appreciate.
Now the final push back across the square, and a walking chat with a young man carrying his rented municipal Vélib bike up the ten steps with considerable effort.
"It’s easier riding downhill," I quip. "Not many people bring them back uphill." He agrees, saying it’s the only way he can find one when he needs it, and adds that he’s biked all around Paris already this morning.
"That must have kept you warm," I say.
"Not all the time," he smiles. "It’s pretty cold in places, and there’s a chilly breeze down by the Seine."
We part ways at my corner, him going even farther up the Butte and me passing school children on an outing, two by two.
And that is how you do the shopping every few days when you’re in Montmartre.