Who Are the People in Your Neighborhood: Latifa 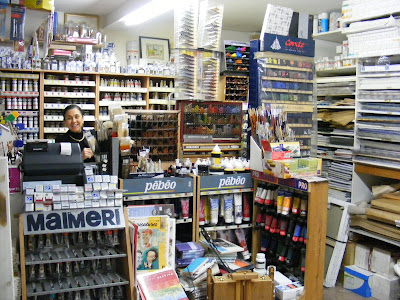 For a century, Montmartre was the artist’s turf. From Renoir at the Moulin de la Galette to Picasso and Juan Gris at the Bateau-Lavoir, they came for the cheap studios. Look up as you walk the streets and you’ll see huge north-facing windows on top floors, built to provide painters with the perfect light, but not much warmth or creature comforts.
In those days - and until relatively recently - there were several tiny shops selling artist’s supplies scattered over the Butte and down its slopes. Of them all, only one is left: Saint Rustique, on the narrow street that shares that name, the oldest and indeed at one time the only street in the entire village of Montmartre.
Ruling over the shop is Latifa. An easy smile, a sun-soaked accent and eyes that twinkle.


Visible from afar only by the sign of an easel over the door, the shop is smaller than most American bedrooms. Inside hides an Ali Baba’s cavern of anything an artist could ever need. Which is a good thing because only a block away is the tree-shaded Place du Tertre, where artists of varied talents cajole tourists into buying their canvases or having a portrait-drawn-while-you-wait. They pop in, plunk down some coins and take the paper or the colored chalk they need because they know where they are... and because she keeps them close to the door. Pas folle, la guêpe.
But today, when I went to pick up the painting she had framed for me, there were no artists popping in. Too cold. So I finally got to talk with her a little bit. I’d always wondered what her story was.

Latifa is from Tunisia (which accounts for the accent). One of ten children, she left her family behind to follow her husband to France. Neither one of them had any relatives here, except for a few distant cousins much further up the Social Ladder, so they hardly ever saw them. Her son and daughter and three young grandchildren live in the Paris region, but she didn’t mention her husband... and I was too polite to ask.
When I asked her how she came to be in this tiny little street - almost a back alley 8½ feet wide - she explained that this room once belonged to the Dali Museum, where she worked. It was a sort of annex. The managers decided it was too far from the museum and too much trouble, so they were selling it. She had no money, and they didn’t want to sell it to her because they felt a woman wouldn’t be able to make it work. But Latifa is a very determined lady, so she called up the old gentleman at the top of the pecking order, whom she’d worked with. And he believed in her. So Latifa took out a loan and bought the place. All 10 x 15 feet of it.
It was dark and smelly and cluttered up with all the wrong things. So she single-handedly hosed everything down, and painted it, and bought all sorts of artist’s materials with money she couldn’t really spare until it was stocked from floor to ceiling, in spite of her petite size. 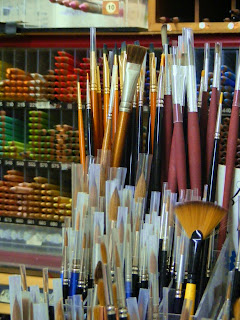 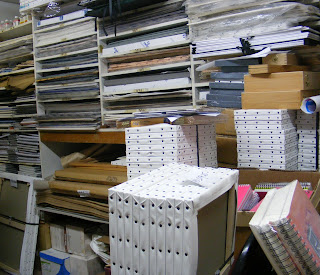 And then she waited. She made sure the artists knew she was there. All the other supplies stores were farther away... and all downhill - which implies walking back up. Artists scramble to make a living, and never know when that golden busload of tourists is going to pull up. So Latifa being literally around the corner became very tempting. Slowly the word got out. 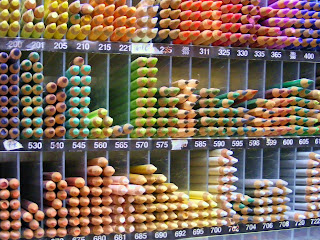 And here she still is, well over a decade later, the last shop standing. All the others are closed, transformed into souvenir shops or crêperies... businesses that make more money. Latifa knows all the artists by name. And they swear by her. A few years ago I uncharacteristically bought a small oil painting from one of them, a real painting, not one of those awful paint-by-number-for-tourists shams. It was a rooftop-scape and looked very nice in its frame... which he proceeded to remove. When I protested, he told me where to buy the same frame, in fact where he had bought it: at Saint Rustique. "Tell her you’re an artist," he added, "and she’ll give you a discount." Which I did. After all, photographers are artists too, n’est-ce pas?

Latifa looks out for her artists. She orders what they need. She lets them serve themselves if she’s busy with someone else or on the phone. She counsels them. (The day I dropped by, she was advising an artist on which easel to buy, and it wasn’t the most expensive.) She lends them things.
Sometimes a tourist will wander in. And then there are some locals, like me. But it’s hard to see how she manages to make ends meet. I guess she gets by on little, although she is always dressed with true French chic.
And always smiling. Although sometimes it’s hard, she admits. It’s hard being on your feet all day, with no one to give you a break. Hard worrying about paying the bills, especially when a particularly cold February is keeping the tourists away from the Place du Tertre, the old village square. Charcoal and chalk and canvases aren’t flying off the shelves. But she’s got her health.
And her grandchildren, the mere mention of which makes her eyes twinkle. 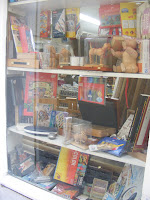 Closed Wednesdays and Sundays,
and for a lunch hour at 1 pm