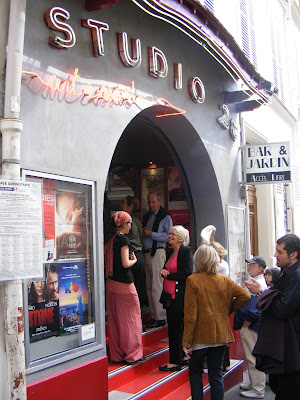 One thing I remember fondly from my childhood is the neighborhood theater - the one in Upstate New York and the one in the suburbs on Detroit’s Eastside. They were both within walking distance. I don’t know what happened to the one in New York because I moved away, but the one in Michigan is gone now. Turned into shops and office space.
Sometimes I feel like my move to France took me back a generation, which isn’t bad for all things. For instance, in my part of Montmartre there’s a neighborhood theater. It’s called the Studio 28, because it opened in 1928. February 10, to be exact. That makes it one of the first movie theaters in Paris, and the first "art movie" theater... and the longest lasting, having been in operation continuously. 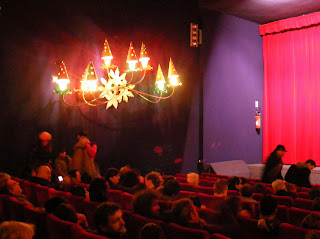 The first movie ever programmed was Abel Gance’s Napoléon, shot with three cameras and requiring three projectors. That first owner, Jean-Placide Mauclaire, showed cutting-edge movies, but one of them brought about his downfall in 1930: Luis Bunuel’s L’Age d’or. The audience found it so scandalous that they ransacked the theater. The film was subsequently banned and Mauclaire was forced to sell. The next owner, Edouard Gross, chose safer films, and was the first in France to program the Marx Brothers, along with W.C. Fields. 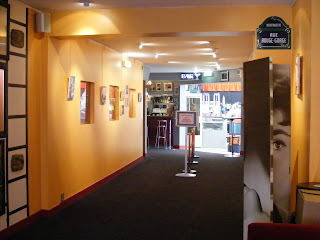 But as long as I’ve known it - which means since 1970 - this independent movie house has been run by two men and their wives... and now their son. Edgar and Georges Roulleau bought it in 1948 and built it back up from near oblivion. They were the first to program a Chinese film in France. And the first to show Bunuel’s Los Olvidados - a daring decision, given what had happened 20 years earlier! They set a tradition of hosting painting and photography exhibits as well as jazz concerts - fitting side activities in this artistic neighborhood. By 1950, Jean Cocteau and Abel Gance had become the "godfathers" of the theater. Cocteau pronounced it "La salle des chefs-d’oeuvre. Le chef-d’oeuvre des salles" (The theater of masterpieces. The masterpiece of theaters), and those words are still marked over its doorway. Finally in 2000 the neo-classic Amélie Poulain mentioned the theater, immortalizing its glory.


When my children were young and I had become a single working mom, I would take them to the Studio 28 so I could do my translations. I’d buy them tickets from one owner’s wife and then the other owner’s wife - who acted as a very gruff usher - would seat them and kept an eye on them... so they didn’t act up (which they wouldn’t have dared!) and also so no one bothered them or walked off with them. As gruff as she was, she was always protective of them. I remember Georges more because he outlived his brother by 16 years. In addition to the moviehouse, Edgar found time to make a film on the Paris jazz scene in 1955 called Jazz Jamboree, with Sidney Bechet, and to produce other movies. That’s all the information I have, and it’s tantalizing.
Both brothers are now deceased, as is one of the wives. The only one that’s left still mans the ticket booth on some days (although the young lady today said she would retire soon). She doesn’t remember me, but I recognize her. She’s not the touchy-feely type, so I never tell her about my memories of those days, but I’m appreciative. It helped my children have the kind of independent childhood that has become pretty much a thing of the past. It was part of their becoming titis montmartrois, children of the Butte, roaming freely as so many generations before them had done.
But I digress.

The particularity of the Studio 28 is that it shows about a dozen movies a week, whereas most other theaters show only one. It’s a multiplex with just one screen. It used to run one movie four times a day: at 3, 5, 7 and 9. Now it mixes it up more by scrambling them over the week... but still at the same showtimes. And always in V.O. (version originale). That means that Bergman is in Swedish, Capra is in English, Truffaut in French, Kurosawa in Japanese, Fellini in Italian... and so on (with French subtitles). That wasn’t the case almost anywhere else, and still isn’t. On Tuesday nights, the last show was - and still is - an avant-première, a show that might not get a shot at the silver screen elsewhere. A sort of Sundance before the fact. And once a month there’s a themed soiree followed by a debate. Plus the theater can be rented out for private projections or press conferences or receptions. (God only knows when they do that because now they’re open 7/7!)
The present owner, Alain Roulleau - who took over from his father, Edgar, in 1996 - loves this theater like the young boy in Cinéma Paradiso, which is kind of what it is. He even lives above the shop. Literally. "I’m like the neighborhood grocery shop that has to stand up to the invasion of supermarkets. (...) If I didn’t own the property, we’d be closed today."* He’s the person behind the latest modernizations: Dolby sound system (which was fun during Scorsese’s Hugo) and digital projector, making Studio 28 the only movie theater in Paris with Sony 4K. It’s a lesson he learned from his father and uncle, who innovated in 1969 by creating the concept Promotion du Cinéma: a different film every day, an avant-première on Tuesday night and a movie pass long before other theaters offered one.

Although the original 400 seats have been mercifully reduced to 170 more comfortable ones, and the original balcony is long gone, leaving room for the projectionist’s booth probably, tradition envelops this theater. The light fixtures designed by Cocteau in 1950 still grace the walls. The Grauman-esque plaster casts of famous feet are still showcased in the entrance hall, along with notebooks filled with quotations and autographs from international movie stars who actually came here. It’s like cinema time travel, a feeling accentuated as you stand in line and look up at the windmill at the end of the street: the venerable old Moulin de la Galette‘s famous Blute-fin painted often by Renoir. 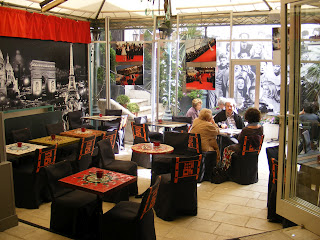 American movie-goers beware. There’s no popcorn... which may explain why the family standing in line in front of me were eating those awful Chamallows (marshmallows) out of a bag that the mother put back in her purse when we got near the ticket booth. However, there’s now a restaurant. The courtyard beside the theater is covered with a wedding-type canopy and serves light food such as quiches and salads with beer, wine or other beverages. And you don’t have to go to the movies there to sit and have a coffee over a conversation.
In short, it’s a part of your family, especially if you like movies. A piece of yesterday still standing today but resolutely looking to the future with a young staff and the latest technology. The Studio 28 has stood in Montmartre since 1928, in spite of the odds, and it will probably be there for many years to come.
Which is a good thing. 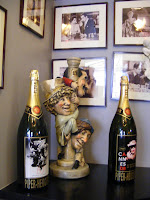